Berl-Berl and the Normality of Animism 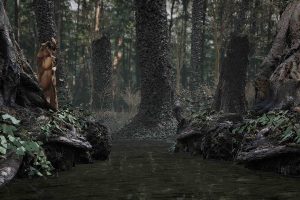 From July through September 2021, the legendary Berghain Club in Berlin was the site of an extraordinary immersive installation by the Danish artist Jakob Kudsk Steensen: Berl-Berl, named after the ancient Slavic word for swamp, and also the linguistic—and physical—origin of Berlin. The “Berl” wetlands formed more than 10,000 years ago and were drained only in the 1700s. Using old Sorbian folklore and spirituality, Kudsk Steensen conjures up a world that is both gone and present. The Sorbian Triglav, a three-headed deity pictured as a large tree, links heaven, earth, and the underworld. It is an image of the living ecological system that constantly changes from undergrowth and fungi to water, ice, leaves, trees, insects, and sky.

As the artist puts it: “Berl-Berl is a song for the swamp, a place for the undefinable—morphing, liminal and mystical. Berl-Berl mourns what is lost and embraces what is new.” The installation consists of large screens with the visual artwork. For the ‘songs’ of the landscape, Kudsk Steensen worked with sound artist Matt McCorkle and singer Arca. Arca’s voice blends with the timeless soundscapes made by local amphibians and birds. To evoke the holistic experience of the landscape, the artist spent a year in the wetlands around Berlin and collaborated with the Museum für Naturkunde Berlin, which hosts one of the world’s largest collection of specimen.

A landscape, alive and ever changing; fungi that transform into plants and insects; clouds that merge with hills; sparks of light that meander through dark woods—the underlying concept of these poetic installations is “animism.” Derived from the Latin word anima, which means soul, breath, and life, animism is a view of the world as alive and agentic, full of meaning and communication. In postcolonial academic discussion, the concept of animism has had a bad reputation for a long time, because it has been used to degrade the belief of ‘primitive’ people, particularly outside of Europe. The situation slowly changed some thirty years ago, when many practitioners of nature-based spiritualities in Europe and North America called what they did “animism,” without any derogatory connotation. Anthropologists were part of this change as well, and in 1999, Nurit Bird-David proposed a reassessment of the anthropological concept of animism. Researchers in different disciplines followed, such as Anne-Christine Hornborg in her exploration of “other ways of understanding indigenous peoples’ cosmologies than ‘primitive’” and her question of “whether these ways might allow us to understand animism, not as a failed epistemology but a relational one” (p. 27).

Relationality has become a key concept for analyzing animistic approaches to the world. Graham Harvey’s definition reflects this understanding: Animists are “people who recognize that the world is full of persons, only some of whom are human, and that life is always lived in relationship to others. Animism is lived out in various ways that are all about learning to act respectfully (carefully and constructively) towards and among other persons” (p. xi). Graham Harvey also edited an impressive Handbook of Contemporary Animism, which confirms that we today can speak of a broad movement that connects theoretical and practical elements of spiritualities, which often position themselves outside of the institutionalized religious traditions.

Holistic artworks such as Berl-Berl provide exceptional ways of experiencing animism. Berl-Berl turns the Halle am Berghain into a “thin place” where various levels of reality meet and the agentic landscapes of city and swamp merge into one. In evoking the present urban landscape of a metropolis along with its deep layers of life that reach back ten thousand years, Berl-Berl also reveals how problematic our habitual distinction between nature and culture is.

If we think about animism along these lines, it is hard to escape the impression that we’re all animists to some degree. Do you say goodbye to your dog when you leave the house? Does your bike have a name? Do you think that the books on your shelf are little persons that have a life of their own? When Sandra Newman writes that “a human being is a haunted animal” and that “every house is a haunted house,” she refers to the normality of animism in our daily life. Our lives are embedded in webs of relationality with other humans (dead or alive), with nonhuman others, and with ‘objects’ that become agentic in our encounters with them.

The playful merging of nature and culture, the realization that our modern environments are brimming with life, and the understanding that we are humans only in relationality—all these expressions of animism can create humility, vulnerability, and responsibility in human beings. They can let us grieve about the rapid extinction of species, but they can also evoke the simple joy of being part of planetary life.

Kocku von Stuckrad is one of the co-founders and co-directors of Counterpoint: Navigating Knowledge. As a Professor of Religious Studies at the University of Groningen (Netherlands), he works on the cultural history of religion, science, and philosophy in Europe. A revised English version of his recent German book will be published as A Cultural History of the Soul: Europe and North America from 1870 to the Present by Columbia University Press in February 2022. He lives in Berlin.

Counterpoint blogs may be reprinted with the following acknowledgement: “This article was published by Counterpoint Navigating Knowledge on 2 November 2021.”

Under the Radar of Hegemonic Perception: Alternative Spiritualities - Counterpoint: Navigating Knowledge · August 16, 2022 at 9:07 AM

[…] of this evidence boils down to the impression that, as I have argued on this blog, animism—understanding the natural world as being alive and in relationship with everything—is […]