Epistemologies of Grief: Toward a More Inclusive Broken Heart 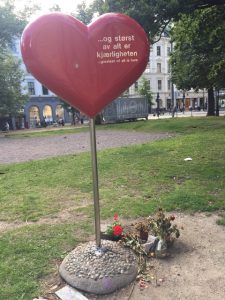 My childhood involved going to a lot of funerals, or at least it felt that way. Many of those services were for human members of my extended family—aunts and uncles and then all of my grandparents. But I also attended a number of memorials for non-human acquaintances and companions who had adopted us as family, even if for a short while.

My mother, perhaps the one who has taught me most about the worth and beauty of all lives great and small, was the chief motivator and coordinator of these solemn yet life-affirming rituals. My memory is that we were constantly meeting and then ceremoniously saying goodbye to creatures of the Central Texas habitat—frogs, toads, turtles, snails, slugs—as well as our “domestic” friends, including dogs, cats, hermit crabs, goldfish, a guinea pig, and dozens of mice. I am told that the deaths of Tom and Jerry, our goldfish, were particularly hard on me, though I can’t remember what their funeral liturgy looked or sounded like. I do remember burying the dogs in the yard next to our house and thinking that it had become somewhat of a cemetery.

All these funerals—human and non-human—gave me a sense of the importance of rituals around mourning as well as the recognition that these lives were, to use Judith Butler’s word from a different context, “grievable.”

Decades later, these early themes of mourning, memory, and grief are central to my current research on collective trauma and memory as well as my pastoral work as a minister. They are also personal; I still grapple with grief over the death of my father—in my arms—from late-stage cancer almost eight years ago.

In my academic work, I’ve explored how communities have grieved and remembered together after recent violent traumas, such as the death of 77 people in Norway on 22 July, 2011, at the hands of white nationalist Norwegian Anders Breivik, as well as those twentieth-century horrors which still haunt us, including the Holocaust and the United States bombing of Hiroshima and Nagasaki.

My work is also concerned with the nature of grief and memorial that arise when a violence and loss continues into the present, as in the case of the ongoing Nakba (“catastrophe”) in Palestine—starting in 1948 but still experienced today as what Palestinian scholar Nur Masalha calls “a continuing trauma” (12). Similarly, here in the United States, terror lynchings of African Americans may have peaked by 1940, but black Americans are still routinely murdered by white police officers and are forced to contend with an unequal justice system that Michelle Alexander has described as the “new Jim Crow.”

Challenging questions arise in these and other contexts of pain and suffering: What public forms have collective memories of these events taken, and who has had the power to shape them? What histories have been left out and marginalized in these rememberings? What does grief look like when the past itself is contested, and how is trauma remembered when it hasn’t yet ended?

These are theoretical questions, but they are grounded in very real experiences of suffering and loss. Covid-19 has imparted us all with another collective experience of grief; the global pandemic has, of course, left so many of us in bereavement. As theologian Barbara Brown Taylor says, “Deep suffering makes theologians of us all” (42). I saw this theological formation up close last summer when I worked as a hospital chaplain in Austin, Texas, especially as the early summer lull in Covid numbers skyrocketed with the (largely preventable) Delta surge in August. Sitting with families in moments of inexplicable loss, a privilege that left me stumbling over my words as a first-time hospital chaplain, I had a new sense of the power of grief.

Yet our relationship to grief—perhaps because of its power—is complicated. We in the “West” aren’t comfortable with it, in part because it highlights our own finitude and precarity. Death, after all, is messy, as are sick and dying bodies. Our grief is messy, too, and the pressures of late-stage capitalism rarely afford us the space or time to give it the attention that it deserves. We are too often called to push it aside and get back to business as if nothing has happened, as if our hearts were not gaping wounds.

There are, no doubt, times when collectives do embrace and express grief. But there can be, I think, a troubling aspect of public mourning that is really only (and paradoxically) perceptible by its absence. The truth is that we publicly grieve for some lives and not for others.

In Frames of War: When Is Life Grievable, Butler argues that who “we” are in times of war is partially determined by whose lives we mourn and those we don’t. Focusing on the wars in Iraq and Afghanistan after 9/11, she points to tortures at Abu Ghraib prison and the harassment of Arabs in the U.S as reflecting norms of who counts as human and is therefore entitled to human rights. “Implicit in this discourse of humanization is the question of grievability: whose life, if extinguished, would be publicly grievable and whose life would leave either no public trace to grieve, or only a partial, mangled, and enigmatic trace?” (75)

Butler’s analysis is poignant not only in the context of human life. Whether and how we grieve the loss of non-human life, and the earth itself, is intertwined with whether and how we act to prevent further loss. Eco-grief as a concept and ritual practice is slowly becoming more mainstream as global communities are experiencing the effects of climate change. In 2019, for example, a memorial was erected for Okjökull, the first of Iceland’s major glaciers to “die” because of climate change. The glacier was declared dead in 2014 because its ice had gotten so thin that it could no longer move—one of the criteria for determining glacier status. On the memorial plaque is a “letter to the future” that reads:

Ok is the first Iceandic glacier to lose its status as a glacier. In the next 200 years all our glaciers are expected to follow the same path. This monument is to acknowledge that we know what is happening and what needs to be done. Only you know if we did it.

Along with their Icelandic colleagues, American anthropologists Cymene Howe and Dominic Boyer helped to lead the memorial service on what they called two “Un-Glacier Tours,” producing a documentary entitled “Not OK” about the glacier. Told from the perspective of the Ok mountain itself, the film is a haunting narrative about the life and death of a glacier.

Whether we are considering human or non-human loss—which are, after all, intimately bound up with one another—we can and should ask ourselves, What can our grief teach us? What knowledge(s) does grief impart to us, not only about ourselves, but about whose lives we deem to be grievable in the first place? And how can we extend our sphere of grievability beyond our immediate and familiar circles outward to marginalized human communities and to the earth itself? Could this more inclusive field of grievability move us to act to prevent such losses to begin with?

I suspect it might, but only if we both take seriously and enlarge our broken hearts, listening deeply to the wisdom that they have to share with us.

Jenny Veninga is an Associate Professor of Religious and Theological Studies at St. Edward’s University in Austin, Texas. The author of Secularism, Theology and Islam: The Danish Social Imaginary and the Cartoon Crisis of 2005-2006 (Bloomsbury, 2014), her research and teaching interests include Søren Kierkegaard and existentialism, Scandinavian religion and politics, religious pluralism, and feminist and queer theologies. Her current research explores the intersections of collective memory, trauma, and witness, including the 22 July tragedy in Norway and ongoing trauma in Palestine and Israel. She is an ordained minister in the United Church of Christ.

Counterpoint blogs may be reprinted with the following acknowledgement: “This article was published by Counterpoint Navigating Knowledge on 27 October 2021.”

Berl-Berl and the Normality of Animism - Counterpoint: Navigating Knowledge · November 2, 2021 at 3:28 PM

[…] of animism can create humility, vulnerability, and responsibility in human beings. They can let us grieve about the rapid extinction of species, but they can also evoke the simple joy of being part of […]