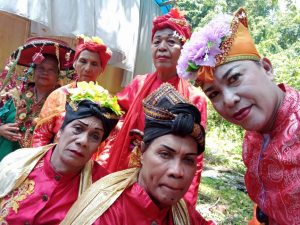 Most academic work on gender in Indonesia shows that many cultures in Indonesia have no strict gender construction of masculinity and femininity. Gender differences are viewed as a continuum rather than a dichotomy. Each person is considered to have elements of both sexes, and it is the social conditions that make an individual learn to be a woman and/or a man. I will add that language also contributes to the fluidity of gender in Indonesia. Most of the languages in Indonesia (more than 700 languages) are hierarchical rather than gendered. Unlike English, Spanish, French, German, and Arabic, there is no gender for a noun and for God in many local languages. So, the pronoun for a man, a woman, and God is the same, and there is no gender associated with God. One community that embodies this gender fluidity and diversity is the Bissu. Just as God is neither male nor female, neither are the bissu. Therefore, they are thought of by some as an intermediary between humans and God.

During fieldwork in South Sulawesi, Indonesia, I had a chance to stay with a bissu person for a couple of days. My intention was to get a sense of the culture and the bigger picture of the people’s ways of thinking, as I have never done research in this area before. I chose to start with the bissu because they are one of the repositories of the culture and knowledge of South Sulawesi. It was not only a research trip to attempt to understand the shared cosmology among ethnic groups in that area and how the Muslim community there accepts the bissu, and transgender persons in general; I also chose this region because there is a clear sense of pride among the bissu as cultural ceremony specialists. One of the reasons for that pride and their community acceptance, I think, is that their existence is legitimated in the I la galigo, one of the longest manuscripts in the world that most South Sulawesi people proudly consider as part of their heritage. “It’s longer than India’s epic Mahabharata or Ramayana,” they said. “A quarter of the content of I la galigo is about the bissu,” said Bissu Eka, whom I lived with. Then she told me about the historical role of the bissu, their power, and how extensive modernization and religious conservatism have undermined the bissu’s status, and the elimination of the kingdom and creation of the nation of Indonesia deprived them of their royal patronage and raison d’être.

Old Bugis society in South Sulawesi recognized five gender categories: they were cis female (makkunrai), cis male (oroani), transgender female (calalai), transgender male (calabai), and bissu. The latter is considered both female and male. Although most of the bissu are calabai or transgender males, most of the bissu distinguish themselves from calabai. “All bissu are calabai, but not all calabai are bissu,” said Bissu Eka. It is because the bissu name carries the responsibility of special knowledge that not many calabai can or want to learn. The bissu are also different in that they are considered pure entities that embody both male and female elements in their body. Unlike calabai, the bissu have no sexual desire toward men and/or women, and they are also chosen by supernatural beings to be bissu. I la galigo depicts them as the intermediary between human communities and the upper world of deities. During the kingdom era (before 1957 when the Bugis royal court was formally disbanded), they were the master of the land and of rituals, as well as religious specialists, which made their social status higher than calabai. They also used to serve in the royal court. They performed rites of passage ceremonies of the royal families including births, deaths, and weddings, and also managed the king’s coronation ceremony. They called upon the spirits or deities to enter their bodies and seek blessing from dewata (gods). Once they were possessed, they became the true bissu and could bestow blessings. 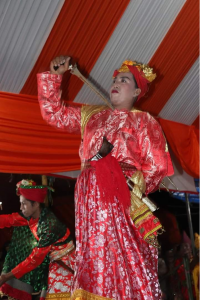 To be installed as a bissu is not an easy process. Once a child is likely or chosen by God to be a bissu, they will be tutored by a senior bissu in the language of God, sacred mantras, bissu dances and chants, offering preparation, and all other steps in various rituals. The final such ritual is the ma’rebba (death) ceremony. In this step, the bissu is treated as a dead body and undergoes a death experience, where their soul leaves the body and wanders into the upper world and asks God’s permission to be a bissu. It can take one to seven days. Once the soul returns, they are a new person who is transformed to a high bissu. The success of this ritual is proven by the impenetrability of their body from the weapon used during the ma’giri’ ritual, where the bissu stabs themselves with a Kris, a traditional weapon.

In modern society with modern education, medicine, and military, the bissu’s knowledge and skills became less relevant except for cultural performances. However, in the Segeri district, where the bissu/calabai community is very solid compared to other places in South Sulawesi, they still have significant roles, especially as shamans where people consult them, and as leaders of ceremonies. Most of the bissu have special knowledge and mantras that enable them to heal and be impenetrable by weapons. Many of them also work as bridal makeup artists and they use their mantras to make a bride look more beautiful or attractive. Their knowledge distinguishes their works from other bridal makeup artists. In addition, the bissu can communicate with plants and animals, and historically they managed agriculture in the kingdom. Until today, the bissu in the Segeri district lead the mappalili ceremony to start rice planting. This ceremony ensures a successful harvest. Part of this ceremony is (again) the ma’giri’ ritual, where the bissu get possessed and become impenetrable by their weapons. This ritual attracts many people.

South Sulawesi has a strong Muslim community and identity, and people are relaxed about the bissu and calabai. Even many bissu and calabai are devout Muslims who have been to Mecca many  times to perform hajj. When they do this ritual, they perform as men. A Muslim woman wearing her hijab, who lives in the same street as Bissu Eka and many calabai, told me that life is no fun without them and that many people will flood the street when the bissu lead the mappalili ceremony. In the main street along the Segeri district, it is common to see bencong pomelo sold along the street. Bencong is another word for a transgender male or calabai. The type of Islam in Indonesia may also contribute to the acceptance of transgendered people and the fluidity of gender in the archipelago. As the largest Muslim country in the world, Indonesian Islam is highly influenced by mystical Islam. This religion was brought and spread by Sufi saints and Sufi brotherhoods, which emphasized the interiority rather than the exteriority of a person. Even in Sufi tradition, it is believed that once a man has reached a higher spiritual level, he is no longer male or female, as he surpasses gender construction. In many Sufi literatures, especially in the work of Rumi and Ibn Arabi, it is said that man should be a woman to reach God because He is more feminine than masculine.

Counterpoint blogs may be reprinted with the following acknowledgement: “This article was published by Counterpoint Navigating Knowledge on 1 June 2022.”