Why Journalists and Academics Need One Another 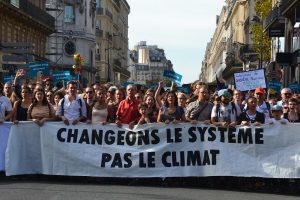 Recently, I interviewed a businessman who is spending his fortune lobbying politicians to ban microplastics, which threaten ocean life and may be toxic to humans. One of his quotes struck me. “Academics,” he said, “Are doing a really good job of cataloguing the destruction of the oceans, but not actually solving the problem.” Many of my friends are academics and I think of them as generally ahead of society, politicians, and the media when it comes to seeing the future state of events. But in this era of devastating climate change, academics can ring alarm bells more loudly by working with local news reporters.

As trusted members of their communities, academics could have a moderating effect on local news, which remains dominated by an “if it bleeds, it leads” mentality two decades after Barry Glassner detailed this state of affairs in The Culture of Fear: Why Americans are Afraid of the Wrong Things. Yet journalists and academics are also natural allies, a bulwark against shortsighted politicians and business people whose actions threaten the environment. By cooperating, they can create space for local environmental news that can generate outage about climate change, and maybe even spur action.

Under greater financial pressure than ever, local tv and radio must compete with social media sites like Facebook, the ultimate outrage-generating machine. While in the 80s and 90s, human-made environmental catastrophe occurred in far away locales, today it happens in our backyards. Yet, rarely do local news stations devote sustained coverage to environmental degradation occurring in their communities. For this reason, academics must push their local newsrooms to retrain this powerful fear-generating machine—which so often stigmatizes people of color and the homeless—to focus instead on air pollution, water shortages, wildfires, improper land use, and species die off—the very environmental crises threatening life on earth.

A century ago, Oscar Wilde panned academics for their reluctance to engage with society. “The world through which the Academic philosopher becomes ‘the spectator of all time and of all existence’ is not really an ideal world, but simply a world of abstract ideas,” Wilde wrote in his play “Intentions.” While academics do a great job engaging online, a majority of Americans (41%) still get their news from television, according to Pew Research. It is imperative to meet them there, too.

As we enter a future of regular pandemic and weather disasters, we need fewer “culture of fear” stories on the 11-o’clock news and more reporting on the links between environmental distress and sociological ills. Much of this reporting will build on academic work, making cooperation between academics and reporters all the more important.

During a pandemic, workers might not have climate change on their radar screens. But as voters, it is imperative to help them understand how poor environmental stewardship leads to pandemics which leads to job cuts and economic stress. If they are missing the point, it’s because “we live in the age of the overworked,” as Oscar Wilde said of his own age, Victorian England. Academics, as natural educators and leaders in their communities, might be able to cut through the noise and lead us out of this malaise—if only their voices could gain greater attention in local media.

Michael Scaturro is a food reporter for Mark Bittman’s Heated. A former staff reporter at Bloomberg, his writing has appeared in the New York Times, The Guardian, The Atlantic, NPR, CNN.com, among others.

This Counterpoint blog may be reprinted with the following acknowledgement: “This article was published by Counterpoint Navigating Knowledge on 10 March 2021.”

Anything Goes… What Trumpism and the Covid-19 Pandemic Can Teach Us About Climate Crisis – Counterpoint: Navigating Knowledge · April 14, 2021 at 9:24 AM