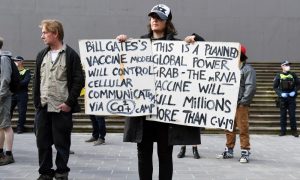 These days, we Europeans are quick to diagnose a post-factual age in light of recent events in the United States. In the European media, the chaotic Trump presidency and his broad support from the evangelical voting bloc are often positioned as the antithesis of enlightened, European societies.

It is true that from the day of his inauguration, Trump presented “alternative facts” from manipulated weather maps to the baseless accusations of election fraud. But the real message of the “Trump experiment” lies beyond the many concrete manipulations of news: It is the idea that “anything goes.” No matter how absurd an allegation, in the combination of mainstream media (like Rupert Murdoch’s Fox News Channel) and social media, any message can reach and persuade a large segment of the population. Three-quarters of Republicans, even those with college degrees, believe the November 2020 presidential election results were rigged. And 58% of Trump voters are convinced that the storming of the Capitol on 6 January 2021 was actually staged by disguised, radical left-wing activists from Antifa, BLM, and other groups to harm Trump.

Attributing these phenomena to political cultures or even mentalities that are fundamentally different from the European ones distracts from the real problem. We should not forget that almost all European countries experienced dictatorial and totalitarian regimes in the twentieth century, all of them defining truth on their own terms.

Anything goes—this is what we are currently also experiencing with the discussions about the Covid-19 pandemic: narratives about the virus’ origin, its hazards, and the efficacy of the vaccine. Social media, especially Facebook and short message services like Parler and Telegram, are now playing a central role in spreading alternative facts: that Bill Gates, the Rothschild family, or 5G cellular antennas triggered the pandemic, or that the vaccines themselves serve to control the world’s population (rendering them infertile or smuggling nanobots into human bodies).

As bizarre and varied as these ideas may be, they are united by the fundamental question of why the truth about the pandemic is being concealed. This is where conspiracy theories, often with an anti-Semitic intention, come into play: according to this narrative, just like 700 years ago, “the Jews” are mostly to blame for the current pandemic. It is frightening how persistent this trope has been, despite the age of Enlightenment and the emergence of modern information technologies.

In the case of Covid-19, the majority of the population worldwide recognizes the seriousness of the situation: there are numerous deaths, many patients have long-term consequences, and overburdened hospitals in many countries. This connection is undeniable for most people.

But what will happen as the climate crisis requires much stronger countermeasures from each individual, from society, and from the economy? It is becoming apparent that we will have to change our methods of food production and agricultural, the entire transportation sector, our travel habits, as well as energy sources and distribution. There will be dozens of Trumps and Murdochs in the future who will use every opportunity to sow doubt about human-made climate change.

Unlike the Covid-19 pandemic, we will not likely see many immediate improvements in the situation as a result of today’s climate change measures; most will only become apparent in 15 to 20 years. What is more, not all people easily grasp the link between climate change and increasing drought, forest fires, forest loss, food crisis, rising sea levels, and weather-related disasters.

Abraham Lincoln is often quoted as saying: “I am a firm believer in the people. If given the truth, they can be depended upon to meet any national crisis. The great point is to bring them the real facts.” This Enlightenment ideal, however, has neglected the ways in which facts are disseminated and how they gain credibility and acceptance. Scientific findings and abstruse conspiracy theories compete with each other in the same public discourse. For instance, the Johns Hopkins University educational video “How Coronaviruses work” on YouTube has reached approximately 41,000 viewers since July 2020, while Plandemic II: Indoctornation, an investigative film enriched with conspiracy myth, has received over 1.1 million clicks on the Kla.TV platform since October 2020.

Whereas 40 years ago the possibilities of reaching a broad media audience via books, newspapers, radio, and television were extremely regimented, today they are almost unlimited in most places. There is no filter anymore at this level of media production and distribution that separates valuable knowledge from nonsense and false claims (indeed, even Flat Earthers have become a global media phenomenon).

Production and distribution of news increasingly follows an economically based attention economy. This primarily means: “good” isn’t necessarily associated with what is true, but what generates clicks. This is the only way the advertising driven Internet can be profitable for companies. Drama, “mystery,” emotionalization, visualization, and personalization of news are decisive and reinforced by algorithms and filter bubbles. This mechanism is not easy to circumvent, which is why YouTube and other platforms have to resort to raw censorship of the most dangerous fake news about Covid-19. In the case of the climate debate, however, such a radical response will be very unlikely, since an immediate danger to life and limb can hardly be proven.

As a result, for both Corona and the climate crisis this means that the decisive factor is the credibility of information. The Corona debates have shown that many people do not have a clear understanding of how science works. The problem is similar to the creationism debates in the United States, where many people perceive science as just one opinion among others.

It needs to be stated clearly that there are scientific findings that are the result of empirical research and that are undisputed in the scientific community. In this regard, science is not just an opinion, but reflects actual facts. These scientific findings are generated systematically according to defined rules and verifiable methods of testing. It should also be clearly understood that there may be different scientific proposals regarding concrete solutions to the climate crisis (ranging from nuclear power, to green energy, to diets such as vegetarianism). If we are to achieve this, in my view, three elements are crucial.

First, access to higher education and academic training must be as broad as possible. A society in which only an economic elite is privileged to attend universities will fail in the long term to communicate policies based on reason. Academics should serve as guides among friends and family as to what information is trustworthy and what is not. Second, science itself must continually explain itself, through contemporary media but also through events in the local context. Third, independent and critical journalism must be strengthened (as Michael Scaturro argued on this blog). Critical journalism communicates even inconvenient insights to a broad audience in accessible formats and non-scientific language. Every newspaper subscription helps.

Trumpism and the Corona crisis have made visible the dangers to which political discourse is exposed in the era of the attention economy. Political actors, media moguls, and opportunists of all stripes have demonstrated what is possible—the next generation is already waiting in the wings (will Fox’s Tucker Carlson be the next US president?). Democratic systems become fragile when truths no longer matter—or, as the second US president, John Adams, put it: “Liberty cannot be preserved without a general knowledge among the people.”

Oliver Krüger (born 1973) studied Sociology, Classical Archeology, and the Study of Religions at the University of Bonn (Germany). After following some research projects at the Universities of Heidelberg and Princeton he became Professor for the Study of Religions at Fribourg University (Switzerland) in 2007. In his research Krüger focuses on religion in relation to new media and on posthumanism. His publications include: Virtual Immortality: God, Evolution and the Singularity in Post- and Transhumanism. Bielefeld: transcript 2021 (forthcoming).

This Counterpoint blog may be reprinted with the following acknowledgement: “This article was published by Counterpoint Navigating Knowledge on 14 April 2021.”

Photo credits: Anti-lockdown protesters hold placards on the steps of Victoria’s state parliament on 10 May 2020. Photograph: William West/AFP via Getty Images; downloaded from The Guardian.