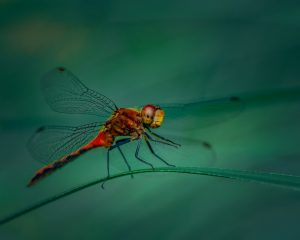 Last week, yet another devastating report about the ecological state of the planet was published: WWF and Zoological Society of London’s biennial Living Planet Report. It confirms (again) that the abundance of birds, fish, amphibians, and reptiles is in freefall, plummeting by 69% on average since 1970. Latin America and the Caribbean region—including the Amazon—has seen the steepest decline in average wildlife population size, with a shocking 94% decrease over 48 years. Africa had the second largest fall at 66%, followed by Asia and the Pacific with 55% and North America at 20%. Europe and Central Asia saw an 18% fall. The total loss is akin to the human population of Europe, the Americas, Africa, Oceania, and China disappearing, according to the report.

Tanya Steele, chief executive at WWF-UK, said: “Despite the science, the catastrophic projections, the impassioned speeches and promises, the burning forests, submerged countries, record temperatures and displaced millions, world leaders continue to sit back and watch our world burn in front of our eyes.”

When I read these reports and statements, I feel a deep sadness. The sadness goes along with feelings of grief, but also of helplessness and anger. The farther we get into the age of climate havoc and species extinction, the stronger this desperate emotional package becomes, and it effects my work and my life in many ways.

In my classes, I make more room to address emotional responses to the ecological disaster in conversation with my students. We read poetry, because poetry brings ecological knowledge across in a more direct way. I get teary when we read Ursula K. Le Guin’s “The Canada Lynx” (2015) or W. S. Merwin’s “After the Dragonflies” (2016), and I see my students struggling with their emotions too.

Grief has become a visible part of ecological work, not only in academic but also in environmentalist and artistic contexts. As Sofia Quaglia reports, there have been many events of “glacier grief” recently, starting with the 2019 ceremonial funeral for Okjökull, which was the first glacier in Iceland to be declared dead. More than 100 people attended the ceremony, and there were readings, speeches, a moment of silence, and the placing of a memorial plaque. As “A Letter to the Future,” the English translation on the plaque reads: “This monument is to acknowledge that we know what is happening and what needs to be done. Only you know if we did it.”

Glacier mourning is just one example of grief rituals in response to species extinction. Many projects are run by architects and artists, such as a memorial series for the environment called “What is Missing?”, created by the designer and sculptor Maya Lin. Scholars have also become interested in the emerging topic of environmental grief and mourning. Lisa Sideris, for instance, looks at the Okjökull funeral ceremony and other rituals. She concludes that “an absence of grief is, oddly enough, symptomatic of an underlying certainty, whether it is the certainty of optimism or that of despair—certainty that the future will simply be a continuation of the status quo or will decline from it” (p. 13).

In this perspective, grief means acknowledging our lack of mastery of the global ecological course of events. Despite our accumulation of knowledge about what is happening and what needs to be done, we’re largely unable to turn this knowledge into political and ecological practice.

Teya Brooks Pribac, in her pioneering book Enter the Animal: Cross-Species Perspectives on Grief and Spirituality, makes it clear that grief is an emotion and a response to loss that we share with other animals. Regarding the phenomenon of environmental grief and mourning, Brooks Pribac notes that “we may identify with and feel the pain of the animals in the wild who have lost their children, their companions, their community with its safety-promoting dynamics, and their habitats . . . We may also deeply grieve when species face extinction.” The pain some humans feel in the face of this violence

cannot be reduced to mere sorrow as expressed by others who upon learning about such brutality may indicate their regret for the mass suffering and continue with their lives mostly undisrupted. . . . Such feelings are possible as they originate in and rest upon the secondary mourner’s empathic recognition of relatedness to both conspecifics and members of other species. We never in fact mourn the unknown, we always mourn the known. (p. 213)

Indeed, what Brooks Pribac calls a “communion of subjects in nature,” in which human animals are slowly rediscovering a space for themselves, is a good way of understanding the deeper meaning of environmental grief and its ritual expression. Without losing sight of the fact that most of the violence inflicted on global ecosystems is caused by members of the human species, grief and mourning can be an act of human solidarity within the communion of subjects. It is an exercise in humility and biocentric listening.

And again, expression of this insight can come through poetry. The next time I read Ursula K. Le Guin and W. S. Merwin with my students, I’ll add David Wagoner’s poem “Lost” (1971). When we feel lost in sadness and desperation, we may want to stand still and listen to the breathing forest. We then may see that

“The trees ahead and the bushes beside you
Are not lost.”

And if we treat the forest “as a powerful stranger,” there is hope in despair, there is consolation in grief. If what a tree or a bush does is not lost on us, we are not lost. If we humbly give up our attempt to master the world, we may be invited by other subjects, more powerful than we are.

“The forest knows
Where you are. You must let it find you.”

Kocku von Stuckrad is one of the co-founders and co-directors of Counterpoint: Navigating Knowledge. As a Professor of Religious Studies at the University of Groningen (Netherlands), he works on the cultural history of religion, science, and philosophy in Europe. His most recent book is A Cultural History of the Soul: Europe and North America from 1870 to the Present (Columbia University Press 2022). He lives in Berlin.

Counterpoint blogs may be reprinted with the following acknowledgement: “This article was published by Counterpoint: Navigating Knowledge on 17 October 2022.”