Offshore: Descending into the Blue Humanities 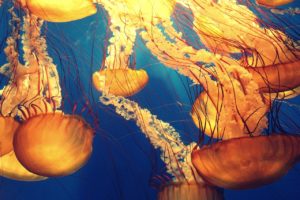 Purely coincidently, I started writing this blog on “World Octopus Day,” which occurs every year on October 8—a date that fits the eight-armed creature so remarkably well that one wonders if it has ever been otherwise. It turns out it has: the inaugural “World Octopus Day” was in 2007. Perhaps less coincidently, this first international day-long celebration of octopi roughly coincided with the consolidation of a new “turn” in the humanities—one that focuses particularly on the creatures’ habitat. In 2009, early modern literary scholar Steve Mentz coined the phrase “blue cultural studies”—or “blue humanities”—thereby providing a rubric for the collective work of an increasing number of scholars who had shifted their attention from land to ocean, and from the surface to what lies below. This growing interest in the ocean began before Mentz, but has taken flight in the years since: among others, well-known journals such as Comparative Literature, English Language Notes, and Configurations have recent special issues on the blue humanities.

The blue humanities are characterized by disciplinary fluidity, straddling environmental studies, oceanography, marine biology, maritime history, Atlantic history, ecology, science studies, and more. A quick glance at the ever-growing number of special issues, books, courses, and conferences on this topic demonstrates that blue humanities scholarship is diverse and expansive. Similarly to the ways in which scholars have used feminist studies as a lens to explore arts and literature, some blue humanities scholars use the ocean as a lens—for instance, to revisit the work of William Shakespeare (who wrote a surprising amount about the ocean, as Dan Brayton’s and Steve Mentz’s books demonstrate). Others, such as Hester Blum, advocate a shift from the frequent use of watery metaphors to a focus on the ocean as a material and social entity, advancing studies that take the vantage point of those whose lives are explicitly connected with and determined by the ocean—such as sailors—to rethink kinship, rights, sovereignty, and belonging. And Stacy Alaimo suggests that we shift the focus from the surface to what lies below. She calls for a “violet-black ecology” that seriously and critically engages those who inhabit the deep blue—jellyfish, anglerfish—and asks how such studies may alter the ways we think about temporality, ontology, epistemology, and ethics. So we see that the blue humanities do not simply or only offer reflections on the ocean; rather, what some scholars have called the “oceanic turn” also encourages us to revisit and reconsider well-worn concepts, frameworks, and modes of thinking.

In some ways, it is remarkable that the ocean has only recently become a widespread critical focal point. After all, since the beginning of the nineteenth-century, it has been the topic of numerous famous and less-famous plays, books, travel writings, poems, songs, and movies. What is more, we live on a “Blue Planet”—the “global ocean” makes up seventy percent of our planet’s surface, is by far the largest habitat, provides more than half of our oxygen, and plays an important role in regulating our climate. Nevertheless, before images showing the far-reaching and devastating effects of oil spills and plastic pollution (to name but two ways in which human beings are forever altering, if not actively destroying the ocean) began to flood the internet, many—scholars and laypeople alike—thought of the ocean as terra nullis, alien, vast, expansive, empty, purifying, ahistorical, indestructible.

It is precisely this set of ideas about the ocean that scholars in the blue humanities seek to change, subvert, and transcend. Our anthropogenic times of climate change, pollution, rising sea levels, and ocean acidification demand action, a response—also from folks in the humanities. As scholars move away from terracentrism (to use Markus Rediker’s term), they reveal the ocean as a locale for the making and unmaking of social relations and identity; a locus for (alternative forms of) politics, frontier metaphors, lawmaking, economics, and militarization; and a vantage point for cultural reflections. Submerging into the deep blue, we further encounter an ocean that is material and three-dimensional, more-than-human yet intimately connected to—indeed interdependent with—human life. Collectively, scholars in the blue humanities reveal and explore the ocean in its (always already entangled) aesthetic, historical, religious, political, social, and material manifestations, revealing just how significant the deep blue is to all facets of (human) life.

And yet, even as the once-neglected ocean is now receiving much-deserved, much-needed attention in European and North American journals, conferences, and courses, we must keep in mind that the literal turn toward the ocean deep in “the West” happened much earlier—with the global “Age of Discovery.” This “oceanic turn”—and, by extension, the theoretical turn under consideration in this blogpost—is intimately related to, if not wrapped up with, colonialism, expansion, and enslavement. So it comes as no surprise that black Americans have frequently engaged and theorized with the ocean in works that often predate the “blue humanities”: consider, among others, the academic work of Hortense Spillers, Fred Moten, Christina Sharpe, Joshua Bennett, Jonathan Howard, and Alexis Pauline Gumbs, and the artistic productions of Ellen Gallagher, Kara Walker, Robert Hayden, and Drexciya.

In “Open Boat,” the opening chapter of Poetics of Relation (1997; 1990), the Martinican intellectual Édouard Glissant captured the experience of the eleven million who were forced across the Atlantic. For him, the “depths of the ocean”—the final resting place for the millions of Africans who jumped or were thrown from slaving ships—functioned as a “womb-abyss.” The “entire ocean,” he writes, “the entire sea gently collapsing in the end into the pleasures of sand, make one vast beginning, but a beginning whose time is marked by these balls and chains gone green.” Glissant penned this in 1990; similarly to other Caribbean scholars and artists, he engaged the ocean prior to the so-called “oceanic turn” (consider also Derek Walcott’s famous poem “The Sea Is History”). These thinkers remind us that the use of “turn” is not without problems. As Alice Te Punga Somerville also notes, it suggests a renewed interest, even while some peoples—Somerville writes specifically of the Pacific, but we can add those living in the Caribbean—“have not needed a ‘turn to the sea’ because [they] were already there.”

Justine M. Bakker is a PhD candidate in the Department of Religion at Rice University, Houston, USA. She’s currently working on her dissertation, a project that engages the oceanic imaginaries of the novelist Fred D’Aguiar, the poet M. NourbeSe Philip, and the visual artist Ellen Gallagher in an effort to rethink the categories of “the human” and “religion” in the field of religious studies.

Counterpoint blogs may be reprinted with the following acknowledgement: “This article was published by Counterpoint Navigating Knowledge on 6 November 2019.”

[…] to the sea” (to use Dan Brayton’s poignant phrase). Luckily, this is rapidly changing. And the influx of academic books, journals, and conferences dedicated to all things oceanic reflects and […]