Marvelous Companions, Past and Present 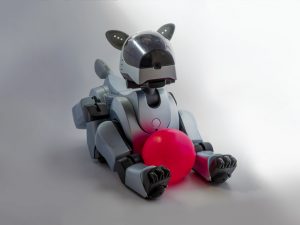 One of the side effects of the pandemic has been a surge of interest in pet companions, both animal and machine. Many seniors—suddenly cut off from tangible human contact with friends and family—have found solace in so-called biofeedback devices such as robotic cats, dogs, and even seals. These costly robots not only look and feel like the furry friends they are supposed to represent, they apparently sound and move like actual animals, too. This elevates them beyond the status of mere ‘cuddly toy’ and renders them veritable interactive companions: “No vet bills, just love.”

Unbeknownst to many of their present-day owners, robotic pets have a vast history. The late medieval ‘wonder park’ of Hesdin (in the north of present-day France), built in the thirteenth century by count Robert of Artois and subsequently maintained by his daughter Mahaut and the Dukes of Burgundy, featured a diverse range of similarly ingenious contraptions. These medieval automata, devices that could move autonomously, included mechanical monkeys and artificial singing birds, for instance, and the rulers of Hesdin spared no expense on these “engines of amusement” (engiens d’esbattemens). The monkeys, covered with real badger fur to evoke a naturalistic appearance, were refurbished about every other year. Though the lavishly gilded singing birds somewhat departed from realism in their appearance, their hydraulic-powered birdsong nevertheless delighted both human and avian animals. The historian Elly R. Truitt notes in Medieval Robots: Mechanism, Magic, Nature, and Art that Hesdin’s jeweled singing birds were based on descriptions of similar automata at actual and fictional courts. In some medieval texts, such birds are said to “sing melodiously, more sweetly than anyone has ever heard,” fooling even actual birds into expecting to find a mate among them (p. 126). 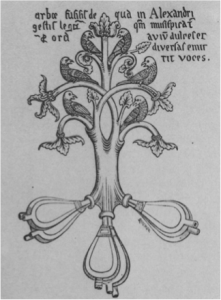 None of Hesdin’s automata have survived the wreck of time, sadly. This image depicts a 12th-century drawing of an organ tree. The contraption functioned differently from Hesdin’s bird automata. Wind would enter the tree from below, making the birds emit “diverse sweet voices” through their beaks. Reference (p. 122).

The lifelike sounds and movements of Hesdin’s artifices also awed aristocratic spectators from all over Europe who did not know that (and much less how) these exotic pets had been engineered. The Dukes of Burgundy, particularly Philip the Good, eagerly capitalized on this marvelous technology to articulate their ambition for supremacy in Western Europe and Christendom. Indeed, the naturalistic and lifelike automata in the garden park of Hesdin, in its entirety also a painstakingly engineered landscape, displayed in clear fashion the triumph of human culture over ‘wild’ nature—a problematic binary which Kocku von Stuckrad has discussed on this blog. Hesdin’s complex, human-controlled artificial environment illustrated that certain members of humankind were capable of mechanically re-creating and dominating the natural world, perhaps even playing God as well.

Yet for all the past and present insistence on the “lifelike” quality and fidelity of such devices, I cannot help but feel that there is also something dangerously reductive in the way we (used to) compare these contraptions to their organic counterparts. It suggests that actual animals are nothing but the sum of certain parts and biological mechanisms—all of which can be imitated and automated by human ingenuity with the right tools. Less than one century after the heyday of the marvels of Hesdin, the philosopher René Descartes famously claimed that nonhuman animals are little more than automata. Contrary to humans, who possess a rational, immaterial soul, nonhuman animals can be fully understood and explained in strictly mechanistic terms according to Descartes. In his Discourse on Method, he argues that it is impossible to tell the nature of mechanical monkeys apart from the biological animals they ape (p. 31). This view has insidious implications. If one perceives nonhuman animals as reflex-driven machines without any capacity for intellect, then one can absolve oneself of any moral consideration for one’s treatment of other animals. Descartes himself, for instance, used this argument to justify the vivisection, slaughter, and consumption of nonhuman animals.

Though much of our understanding of animal life has changed significantly since the thirteenth century, mechanistic and reductive perceptions of nature remain influential in and beyond Western scientific discourse. Factory animals, for instance, illustrate the ease with which humankind may reduce other animals to little more than their (re)productive use value, to be born and bred as interchangeable cogs in the consumer culture machine. As the historian Anna Lisa Taylor remarks, “from a nonhuman perspective, the Dark Ages are now” (p. 2). Our present Covid ‘plague’ further underlines just how devastating the consequences of unsustainable animal farming can be for humans and other animals.

In her recent book The New Breed: How to Think about Robots, the AI ethicist Kate Darling proposes that our shared history with nonhuman animals offers a glimpse of what our future with robots will look like: some will be used as tools, others as companions (p. 228). Yet, as the biofeedback devices that I began with illustrate, the future is already here. I certainly see the benefits of dressing up care robots as our familiar furry friends for people who are not/no longer capable of caring for other animals. At the same time, I am also concerned that creating ‘hassle-free’ robotic pet imitations of actual nonhuman animals will adversely affect our relationships with said animals, as it risks solidifying the abiding notion that pets are human property, animate cuddle toys that exist solely for their benefit to human owners. Globally, people have sought an escape from their lockdown-induced social and physical isolation by adopting pet animals, often without sufficiently considering whether they are able to meet their needs. As I write this, a growing number of animal shelters report that the number of rescues that are being returned to shelters surges. In fact, many people already even return their companions within 24 to 72 hours after their adoption, as they had underestimated the daily work and commitment that raising a ‘real’ animal takes.

Unlike the automata at Hesdin, nonhuman animals are decidedly no “engines of amusement.” In my estimation, contemporary pet culture is still excessively—and unsustainably—steeped in reductive mechanistic thought. What would pet culture look like if we collectively adopted a humbler relational ethics, one that appreciates that humans and their pets are “beings,” to borrow the philosophical ethologist Vinciane Despret’s phrasing, “who mutually affect one another, who exchange judgements and opinions, who reciprocally modify one another and who know that they do it” (p. 131)? A pet culture founded on this post-anthropocentric, mutualistic way of relating to nonhuman animals could be a whole new kind of marvel.

Sven Gins is a Belgian medievalist who works at the University of Groningen, Netherlands. He currently investigates medieval bestiaries, automata, and legal prosecutions of nonhuman animals in his PhD project, Homo Imperfectus: Animals, Machines, and the Quest for Humanity in Late Mediaeval France, financed by the Dutch Research Council (NWO). His latest (open access) publication, “Everything but the Squeal: The Politics of Porcinity in the Livre des Propriétés des Choses,” explores how medieval Christian thought defined (non)humanity by closely interlinking domestic pigs with a broad range of other species.

Counterpoint blogs may be reprinted with the following acknowledgement: “This article was published by Counterpoint Navigating Knowledge on 19 August 2021.”