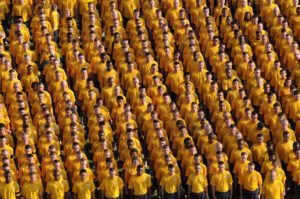 “Make kin, not babies.” Donna J. Haraway’s four-word gauntlet, thrown down in her 2016 book Staying with the Trouble: Making Kin in the Chthulucene, becomes more relevant every day.

As a woman who has chosen not to have children, I’ve been called many things. My femininity, spirituality, intellect, and sexuality have all been questioned. “Don’t you think that’s selfish?” I’ve been asked, immediately followed by the daft question: “Who will take care of you when you’re old?” When I suggest that having a child for the purpose of ensuring elder care is pretty much the definition of selfishness, I am met with blank stares.

Nevertheless, I’m going to step out on that limb and say that we need to have fewer babies. The world needs fewer people in it. The global human population is currently 7.6 billion, and it’s projected to reach 9.8 billion by 2050. Given planetary resources, that number is completely unsustainable.

Yet while major publications have addressed both demographic decline and the perils of climate change (the Fourth National Climate Assessment in the US, for example), connections are often not drawn between the two. For example, the BBC published an article on 9 November 2018 lamenting that “nearly half of countries [are] now facing a ‘baby bust’ – meaning there are insufficient children to maintain their population size” – without any discussion about current population levels already overburdening the planet. Two weeks later, it published another article warning that “unchecked climate change will cost the US hundreds of billions of dollars and damage human health and quality of life” – without connecting this to overpopulation, the burdens it places on the planet and economies, or the hand-wringing about demographic decline. We’re not having the tough conversations about how encouraging population growth impacts the potential for future climate catastrophe.

China, once known for its one-child policy, is now facing a “baby bust.” Women in China are encouraged to “have children for the country.” Across Europe and Asia, governments are incentivizing citizens to have more babies. Hungary’s recent effort in this area adds fuel to the anti-immigration fire by calling for more “Hungarian children” as an alternative to immigration. Viktor Orban’s plan offers housing and vehicle subsidies, $2.5 billion for healthcare, an extra 21,000 nursery school places, interest-free family loans of €27,000 (to be forgiven once a couple has three children), and income-tax exemption for life to women with four or more children – perhaps on the assumption that a woman with four children is unlikely to be working outside the home and earning much income anyway.

These goals are short-sighted, fueled by economics and, in some cases, outright xenophobia. But the ugly convergence of demography and nationalism, as exemplified by Orban, is hardly new. The Nazis had their “Lebensborn” initiative, encouraging “live births” among “Aryans,” a program echoed in recent election posters of the populist right-wing AfD (Alternative for Germany) party. One such poster features a photo of a smiling white woman exposing her pregnant belly under text that reads: “New Germans? We make them ourselves.”

Amazingly, though perhaps not surprisingly, our policies are still grounded in the paternalistic idea that every woman wants and needs to have children – whether she realizes it or not. We’re governed by leaders who think that women’s wombs can be rented with monthly cash incentives. We’re electing men who tell us that what we need is more (ethnically “desirable”) babies.

We need to interrogate these discourses: the time-bomb biological clock, the mother who saves the nation. If we believe that population growth is the solution to labor shortages in certain advanced economies while failing to acknowledge the strain this places on the planetary community, then we’ve got our heads buried in the expanding sands of the Sahara. The disconnect required for governments to acknowledge the catastrophe of climate change and simultaneously incentivize their citizens to have more children is staggering.

Seen in this light, the choice not to have children may be one of the least selfish, planetarily responsible things a person may do. It’s not the only solution. It’s not always an option for people (particularly women) in every context. And of course it should certainly not be imposed on anyone. But we need to have more varied and complex discussions about how to enable people to make informed choices about whether to have children and how many to have. We need to ensure that everyone has the resources to act on those choices in a safe, affordable way. As Eileen Crist notes, “family-planning services, gender equity, and education…invariably work to lower fertility rates across very different nations and cultures.”

A further step is to find innovative economic solutions that simultaneously address elder care, labor shortages, and overpopulation on the planetary scale. Perhaps the financial resources governments devote to incentivizing people to have more children could go into revamping social security, care for the elderly, and programs to help integrate new immigrants into the labor market instead.

Finally, we need to widen the conversation so that making choices about having children becomes a question of living as part of a more-than-human planetary community, not a nation or a nuclear family (but that’s a whole other blog post!).

The convergence of these issues presents enormous social, political, and logistical challenges. Addressing them will change the complexion of many societies. But it’s not as if our societies aren’t torn and restitched on a regular basis. We are already dealing with upheavals caused by “natural” disasters, human violence, conflict over scarce resources, and technological change. We are already feeling the consequences of both population and climate crises. We need to find ways to address this intersectional challenge by giving more opportunities to people already living on the planet and prioritizing the wider planetary community.

Making kin rather than babies is not easier. It’s harder. But we have to do the hard work if we’re serious about finding workable solutions to both population and climate crises. Because procreation is not one of them.

Alissa Jones Nelson completed her PhD at the Centre for the Study of Religion and Politics at the University of St. Andrews in 2009. In 2011 she began her #alt-ac career, working first as the Acquisitions Editor in Religious Studies for De Gruyter and then as the Senior Editor and Head of the Publishing Department for the Dialogue of Civilizations Research Institute in Berlin. She now works as a freelance writer, editor, and translator, based in Berlin. She also is the Publications Manager of Counterpoint: Navigating Knowledge. Find more of her work here..

This Counterpoint blog post may be reprinted with the following acknowledgement: “This article was published by Counterpoint: Navigating Knowledge  on 27 Feb. 2019.”

Ms. Jones Nelson – an excellent article. Thank you for posting it.

Thank you for reading it!

Unholy Alliances and the End of Taker Culture – Counterpoint: Navigating Knowledge · May 14, 2019 at 9:16 PM