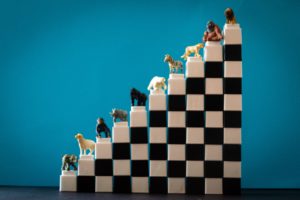 My last blog post suggested that we need to think anew—personally and politically—about population growth and having children in the light of the current ecological crisis. I drew on Donna Haraway’s pithy directive to “make kin, not babies.” That post focused on the second argument (“not babies”), and here I’d like to return to the first point—“make kin.”

Making kin is partly about reconsidering what constitutes “kin.” Thinking beyond the nuclear family and the borders of nations, ethnicities, ideological affiliations, or even species is essential to addressing the twin crises of overpopulation and species death. We’re already well on the way to destroying millions of species, and quite likely ourselves among them. Who we “make kin” with has always been an ethical and ecological choice, but that choice matters now more than ever.

In When Species Meet, Haraway observes that making kin means making “a mess out of categories” (p. 19). For too long, we’ve been placing human beings at the center of things – in theology, philosophy, politics, economics, art, and literature. While terms like “other-than-human” and “more-than-human” do point to the larger context in which humans live and move, they still place human beings at the center. In our current planetary moment, this isn’t enough.

I don’t intend to criticize those scholars who have developed these terms in their research. It’s notoriously difficult to find language to express these concepts, and experts like Graham Harvey have done vital work in this area. But just as the term “non-religious” retains “religious” as the central or default concept–defining a group by its difference from religion–so terms that hinge on “human” primarily remind us of the differences between homo sapiens and other species. If we’re serious about addressing the planetary crises we’ve created, we should be focusing on how we are part of and no better than the flora and fauna around us. As Carl Safina recently noted, prioritizing humans is exactly what got us into this mess in the first place.

This incestuous obsession with the human is an ethical and ecological problem we need to talk about. And we are taking steps in the right direction. The Tierschutzpartei in Germany, which runs on a nuanced platform with the slogan “humans, environment, animal welfare,” has won a seat in the European Parliament for the first time. The Dutch Partij voor de Dieren, which runs on a similar platform—“We are the first political party to put the whole planet and all its inhabitants at the center, not just the short-term interests of humankind”—held onto the seat they won in 2014. Neither are single-issue parties, and both are gaining ground.

At a time when rivers, forests, and mountains have been granted legal personhood in certain contexts, what if we were to speak less of humans and more of persons? And what would it mean to think of these persons as kin?

That’s quite a big leap to take from current thinking and practice. But what if we were to take a smaller first step—to broaden our thinking about kin ever so slightly to include all mammals? How would it affect our priorities or eating habits if we thought of cows as family? How would we reconceptualize things like parental or pawrental leave if care for dependent animals and children were both valued, proportional to the time investment required? What if we took animal abuse as seriously as child abuse? How would our laws change if we thought of lions and elephants as persons protected by the same laws that apply to the trophy hunters who kill them? How might the tragedy of Harambe the gorilla—killed by Cincinnati zoo officials to prevent harm to a 4-year-old who had fallen into his enclosure—have played out differently if we considered both the boy and the gorilla kin, their lives equal in value?

No doubt some of these questions will have readers rolling their eyes. But facing the scale of our current planetary crises, it’s time we started making a mess out of the categories we have too long used to separate humans from other beings and set ourselves over them. This doesn’t mean ignoring our human kin, which we do when we focus on endangered wolves, polar bears, and rhinos while ignoring oppressed, hungry, abused human beings. It simply means that each of these persons would be of equal concern, with rights that are weighted and balanced against each other. It means taking suffering seriously, doing our best to avoid prioritizing some victims over others.

Plenty of people may laugh at the idea that animal kin are as important as human kin. But anyone who has watched a child—or an adult, for that matter—make kin with a domestic or wild animal understands the emotional and physical importance of these relationships. Prisoners and other vulnerable populations also benefit physically and psychologically from animal companionship. And we’re learning more all the time about animals’ emotions and their own interspecies communication. So why are we failing to take interspecies relationships seriously? If we can make kin across bloodlines, national lines, and ideological lines, then why not across species lines?

Rather than casting blame on each other in a downward spiral of competitive ethical righteousness (over what we eat or wear, how we travel, or how many kids we have), let’s talk about how we each balance our desires and responsibilities, both local and global. We all make ethical compromises. The issue is not whose balance is better. The issue is failing to realize that the choices we make about who’s kin (and who isn’t) are part of that balance—that kin relationships are, in fact, an ethical decision and not a given.

This realization—and the complex kin relationships it implies—should be incentivized socially, politically, and economically, just as (or perhaps more than) human procreation is. Because we can’t go on the way we’ve been going. In the search for creative alternatives, we’re going to have to make a mess.

Alissa Jones Nelson completed her PhD at the Centre for the Study of Religion and Politics at the University of St. Andrews in 2009. In 2011 she began her #alt-ac career, working first as the Acquisitions Editor in Religious Studies for De Gruyter and then as the Senior Editor and Head of the Publishing Department for the Dialogue of Civilizations Research Institute in Berlin. She now works as a freelance writer, editor, and translator, based in Berlin. She is also the Publications Manager for Counterpoint: Navigating Knowledge. Find more of her work here.

This Counterpoint blog post may be reprinted with the following acknowledgement: “This article was published by Counterpoint Navigating Knowledge on 29 May 2019.”

These questions don’t have me rolling my eyes at all, and I have no doubt that our human centered focus has gotten us into this sorry state. But how do we avoid prioritizing some victims over others when, as you make clear (correctly, I think) ethics involves compromises? Are there better and worse ways of prioritizing? Is the point that we not default to the human as the one receiving priority? I just don’t know how we make ethical decisions without choosing to help some kin at the expense of some others.

Thanks for reading, Lisa. I don’t think there’s a simple solution to the difficult questions you raise. I do think we can do a much better job of considering courses of action that benefit the most beings and harm the fewest. For me, the key point is in your second-to-last question: we should not be prioritizing humans over all other beings. Our individual experiences will likely dictate who we value most in our ethical decision-making, but I hope we can have more robust conversations about making kin and what this means for the world, and start to find our balance in a common (albeit contested) space between each of our individual positions. If we can admit that ethics always involves compromise, then that’s true on an individual as well as a collective level, and when we’re compromising on who needs help most, human kin should not automatically jump to the top of the list. Those conversations are going to be difficult!

This is a great and thoughtful essay, Alissa. I’ve also wrestled with the ethics of kinship. Here, among other things, I argued that although we typically have greater ethical obligations to those closest to us, that does not mean that in our individual and political lives, we have no obligations to more distant relatives. See ‘Evolution & Kinship Ethics’, where I flesh this out a bit more: http://bit.ly/KinshipEthics . I also appreciate that you brought up Harambe’s death, wherein I made a related argument in ‘The Value of a Gorilla vs a Human’ in the Huffington Post, in which challenged the ideology of #HumanSupremacy; see http://bit.ly/GorillaValue