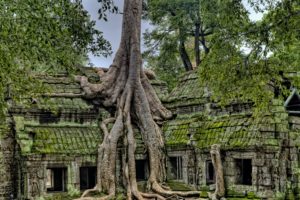 Modern human thought, philosopher Bruno Latour writes, “takes us far away” from the physical world. It defies connections to matter, as if thought were distinct from the bodies that enable them, and at the same time, it hopes to improve upon that matter. It hopes that by defying gravity, the friction that erodes physical bodies is overcome. With roots in Plato, in the Ptolemaic/Aristotelian understanding of the cosmos, and in certain of the Abrahamic religions, it holds that thought, ideas, and spirit are “higher” than material bodies.

The question here is: how did the natural material world become so denigrated? There are of course western traditions of thinking that do not disparage the body or even eroticism, but the particular type of modern thought in question here leans toward a mind/body or spirit/matter dualism, with the former of each pair being of more value and importance.

There are good reasons for certain ancient traditions to distrust changeable materiality and to move toward more enduring spirit, ideals, reason, or god. In times without modern medicine and other technologies, bodies were much more vulnerable to disease, incapacity, and death and so were less dependable. The desire to transcend the fragile body moved people to imagine beings that weren’t vulnerable, that were enduring and powerful—in short, gods, and in particular western traditions, the omni-God of monotheism.

After all, we imagine “better” and “different” realities all the time. If life here is short, then god might be immortal; if we are limited in what we can know, then god might be all-knowing; if we are limited by time and place, then god might be omni-present. Along with the nineteenth century German philosopher Ludwig Feuerbach, we might say there was a collective projection of wishful thinking onto the divine which also valued disembodied thought over physical (fragile) bodies in the human realm as well. In the end, theology, ideas about god, is always also anthropology, information about us.

The desire to reduce our vulnerabilities may also have prodded us to try to be more like those invulnerable gods and to invent technologies that help us live longer (medicine), know more (printing presses, microscopes, telescopes), be more present (faster communication and transportation), and be more powerful (military, agricultural, and production technologies).

However, it didn’t take long for problems to emerge with the effort to be more powerful and god-like, including colonization, slavery, and mass economic inequity. The technological improvements of the modern era benefit humankind and also allow us to better brutalize one another and the planet. We are often so far away from the physical sources of our food, water, shelter, etc. that we think we are “above” the natural world. We are often so distant from those who produce the goods we use that we don’t give their conditions a thought. And that distance allows us to violate them and our natural resources.

Post-modernism was in part a response to the contradiction between western ideals of compassion, cooperation, justice, and fairness and increases in injustice, oppression, and the degradation of nature. In many ways, the post-modern turn is more of a series of interconnected turns, beginning with the revolution of Copernican astronomy, the Reformation, and the era of European colonization, in which many Europeans learned about the non-modern ideas of indigenous peoples. It was furthered by the Industrial Revolution, influx of “eastern” thinking into Europe, which helped fuel the Romantic movement, and the emergence of evolutionary theories in the nineteenth century, which place humans as an emergent part of nature rather than outside it.

With such turns, the monotheistic worldview in Europe was destabilized. Post-moderns began to examine the various mechanisms and politics of what is considered “truth” and thus what is used to justify unjust, oppressive behavior. This in turn led to a proliferation of critical theories, some based in Marxist and identity-politics theory, to address the injustices of the past. Feminist, black, disability, class, latin/x, queer, post-colonial and other critical theories began to challenge the idea of a normative human, a “superior race,” fixed gender and sexuality, etc. Each of these critiques widened the tent of possibilities for how people can live and think about the world (“theoria”).

However, many of these critical theories have been concerned mostly with the human world, with widening human perspectives and possibilities. Many have been wary of the concept of “nature” because what’s considered “natural” has been used to justify various oppressions. If something is unnatural (not as god made it), the argument went, it must be evil.

Starting  in late 1960s, with the publication of Rachel Carson’s Silent Spring, the famous “Earth Rise” photo of the planet from outer space, and the growing awareness of environmental degradation, the idea of bettering human life by reducing the non-human world to mere “resources” for our exploitation was increasingly understood as a serious problem. Yet post-modern thought, with few exceptions, had not offered much in the way of an environmental ethic.

More recently, however, new “immanent” ways of thinking have developed that understand the human animal as part of the animal and plant world—in short, that are returning human thought to the humus. With these, we are beginning to see the new option of critical romanticism.

“New materialisms,” neo-animisms, and other theories are bringing concepts like thought and matter, humans, plants and animals, and biotic and abiotic together, recognizing their existence on a single plane. With help from non-western and non-modern thinking, they offer us a way out of human-centeredness—a way to open up to our creatureliness and to recognize that the human perspective is just that, human. To be critically romantic is to never confuse one’s socially, culturally, racially, sexually, ecologically, located perspective with reality in itself. It is, as David Abram reminds us, to ground oneself and one’s thinking in the gravity of embodied living on a physical planet with its natural processes.

In all this, there remains a place for human reason and ideas about what’s true. But from a critically romantic perspective, whatever we believe to be true has little to do with mono-perspectival ideas about truth. Our truth is housed in ambiguity and uncertainty. It always involves interpretation and is never full and final but partial and provisionary. Truth, from this critically romantic perspective, is more about goodness and beauty, ethics and aesthetics, than about certainty.

The question of whether an idea is true ought to be something like this: how does this idea or do these sets of ideas—”truth regimes”—help support the flourishing of planetary communities and how does it harm some or all of them?

Whitney A. Bauman is Co-Founder and Co-Director of Counterpoint, as well as Associate Professor of Religious Studies.  He is the author of several books and articles including: Religion and Ecology: Developing A Planetary Ethic (Columbia University Press, 2014), and with Kevin O’Brien, Environmental Ethics and Uncertainty: Wrestling with Wicked Problems (Routledge, Forthcoming 2019).

Counterpoint blogs may be reprinted with the following acknowledgement: “This article was published by Counterpoint Navigating Knowledge on 14 August 2019.”

[…] In a recent blog, I wrote about the idea of a “critical Romanticism.” I have now come to think about this as a Critical Planetary Romanticism (CPR) for the earth. Again, it must be critical in order to address the fact that everyone’s embodiment within a given world experiences that world differently. Thus, we need critical theories to keep us focused on the ways in which worlds treat some bodies better than others, and in some cases completely ignore or abject certain bodies. Such theories must be planetary in scope in order to prevent such Romanticism from becoming too closely associated with one’s own experience, culture, language, bioregion, or nation. Finally, it must be Romantic so that we humans acknowledge our embeddedness within the evolving planetary community. […]