At the End of the World (in a Van) 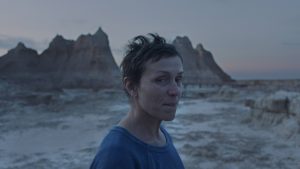 Currently making its rounds through cinemas this spring (2021), Chloé Zhao’s haunting Nomadland is a creative adaptation of Jessica Bruder’s 2017 non-fiction book of the same name (subtitled “Surviving America in the 21st Century”), which deals with the growing underclass of Americans forced by economic hardship to live in their vehicles, perpetually on-the-road. Nomadland has quickly become a darling of the film festival circuits for its gorgeous cinematography and auteur blending of documentary realism with fictional actors (such as Frances McDormand). While Nomadland won the Golden Lion at Venice, and currently carries six Academy Award nominations, it has not always been favorably received by an American public generally unfamiliar with Bruder’s original book and its critiques of late-stage capitalism (“a terrible movie about some depressed lady who just can’t get a real job,” as one person griped on Twitter).

The movie may interest those who study the ongoing cultural manifestations of what some have deemed the “American nature religion” tradition that was amplified by nineteenth-century Transcendentalists such as Ralph Waldo Emerson and Henry David Thoreau—a spiritual ideology which reconstituted itself around the wilderness ethos of John Muir, and the western landscapes of the Sierra Nevada (which, more than mere backdrop here, operates in the movie like actants on the journeys of its different characters). This blog reflection is less a descriptive review of Nomadland itself (though readers beware, there are some spoilers below), and more of an attempt to meditate (loosely) with it: to take hold of the places in the movie that explicitly graft its aesthetics into a peculiarly American problematic around wilderness and spirituality, and offer some reflections on the status of films like these in our moment of planetary crisis and climate change. I’ve been prompted to think about the viability of a critical reengagement with the Romantic tradition here (as evoked by the movie), via Whitney Bauman’s calls on Counterpoints and elsewhere for a kind of urgent earth C.P.R. (“Critical Planetary Romanticism”).

Although director Zhao has said she wanted her movie to “depoliticize” Bruder’s book—much of which unfolds in red-state Trump territory—and rather focus on “universal” themes of home and loss, its panoramic vistas of landscape become inevitably entangled with the politics of late-stage capitalist labor, and the vagaries of the so-called gig economy, as we watch the main character Fern (played by McDormand) move from one debilitating temporary job to another (cleaning toilets, harvesting beets), attempting to stay financially afloat in her van-home. The fluorescent scenes filmed in an Amazon warehouse have been critiqued by some as too sugar-coating of the actual working conditions non-unionized Amazon “campers” face (in contrast to the book, which provides more detail); I still found the scenes unsettlingly garish, reminiscent of the dehumanizing bright distortions of the German photographer Andreas Gursky’s interior landscapes (who had photographed Amazon warehouses earlier, in 2016).

“I think what the nomads are doing,” says Fern’s sister about her at one point, in her defense, “is not that different from what the pioneers did. I think Fern is part of an American tradition.” This tradition is not only a frontier mythos (drenched in the blood of settler-colonialism, a fact only obliquely suggested by the movie), it is an aestheticized relocation of spiritual journey into the landscape itself, and a visual spectacle of the panoramic and the picturesque: a soteriology of the wilderness, its unfolding of endless pilgrimage, à la Jack Kerouac.

“In the wild is the preservation of the world,” as Henry David Thoreau had formatively written in his talks and famous essay on the virtues of aimless drifting, back in the 1850’s—and Thoreau’s religious asceticism and self-reliance (so wonderfully discussed here by Alda Balthrop-Lewis) ghosts several moments in Nomadland. In one brief scene, Fern is seen reading a book in a laundromat that would seem to be—from a distance—to be a battered bluish copy of Roderick Frazier Nash’s iconic Wilderness and the American Mind (with its central chapter on Thoreau); at several other points (following Bruder’s book), the character Linda May also talks about her dream of constructing an “earth ship” for her family in the desert out of recycled materials, following the ecological movement begun by Michael Reynolds that often self-consciously translated the nineteenth-century D.I.Y. “tiny house” aesthetic of Thoreau’s Walden into a (post)modern context.

But all this rootlessness and the making of selves in spectacular landscapes are prompted by loss and economic privation (the film, more than the book, seems haunted, or even of the hauntological, in Jacques Derrida’s sense), not from the illusion of a freedom of choice. Fern—a fictional character developed by McDormand—is from the very real town of Empire, Nevada; a boom-and-bust town created by the United States Gypsum company and its open-pit mine that fueled the town’s growth. After the 2009 economic collapse, US Gypsum went bankrupt more or less overnight, and closed the town (with forced relocations, and even the cancelling of its own zipcode, as the start of the movie clarifies). Fern becomes a van nomad after the death of her mine-working husband, and the town’s collapse—the film never reveals the precise circumstances of his decease, leaving open the possibility to imagine it as related to the toxicity of the mining operations themselves (open-pit gypsum mining near Empire required blasting large amounts of ammonium nitrate and fuel oil). The town of Empire is very much, materially, of the Capitalocene.

The film’s closing sequence, true to haunted Gothic form, features Fern returning to the ruins of Empire and her derelict former home. The town is now a posthumanist landscape, in the ruins of the future, de-peopled in a way that evokes, again, nineteenth-century landscape painting (maybe in particular here Thomas Cole’s final painting—“Desolation”—for The Course of Empire, from 1836, the same year Emerson publishes his rosily optimistic Nature essay). W. J. T. Mitchell has written how the vistas provided by the pictorial landscape tradition provided a kind of “dreamwork for imperialism,” and this is brought somewhat literally home to Empire, at the end of Nomadland. Fern walks out the wreckage of her back door and disappears into the indifferent winds of the Black Rock Desert.

But this land is not empty, in spite of the ways Nomadland must inevitably inscribe its aesthetics into a wilderness tradition shaped by western landscape painting and Transcendentalist spirituality. The Black Rock Desert is sacred lands and territory for the Pyramid Lake Piaute, who have consecutively inhabited the region for over 10,000 years. More recently, the same desert space has become transformed by the annual Burning Man Festival, whose countercultures have sometimes existed in tension with the Indigenous peoples who call that area home. As economically disparate as the van-dwellers of Nomadland would seem to be from the wealthier tech elite who have more recently come to characterize the Burning Man demographic, maybe both are twinned ends of a spectrum shaped by western capitalism that continues to view that land(scape) as frontier blank—a canvas awaiting description, an empty page needing the unfolding of a self.

Devin Zuber is Associate Professor for American Studies, Religion, and Literature, and the George F. Dole Professor of Swedenborgian Studies at the Graduate Theological Union in Berkeley, California. He has published widely on art, literature, and nineteenth-century America. His most recent book, A Language of Things: Emanuel Swedenborg and the American Environmental Imagination (University of Virginia Press), was awarded the Borsch-Rast Prize in Religious Studies for 2020. Before moving to California, Devin taught at different universities in Germany, and has also held fellowships or visiting professorships at the British Library; Stockholm University’s Department for Aesthetics and Culture; and at the Rachel Carson Center for the Environment (LMU Munich).

This Counterpoint blog may be reprinted with the following acknowledgement: “This article was published by Counterpoint Navigating Knowledge on 24 March 2021.”