“Worthy Women”: Sexual Bargaining for a Place in Utopia—or Dystopia? 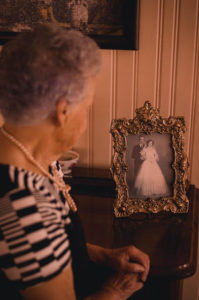 Some white women in South Africa who are followers of the Worthy Women movement are being encouraged to present themselves as sexual objects to their husbands, give over decision-making to their husbands, and live with diminished freedoms and rights at home and in the public arena. This is perplexing to me. Why are they making such choices? The roots of this phenomenon appears to be an extreme form of patriarchal Christian theology advanced by the preacher Greta Wiid as well as the diminishing economic security and challenges to the social identity of white Afrikaners.

The Worthy Women movement was founded by Wiid, a conservative white Afrikaner Christian preacher who has proven to be a controversial figure, having been reported to the South African Human Rights Commission numerous times. The movement is a female-only Christian social movement similar to Angus Buchan’s Mighty Men movement. Wiid promotes a social order of male headship, female subordination, and a family and societal structure that stems from theological convictions that I find a dubious mix of body theology and political theology.

While there are, regrettably, many historical and contemporary examples of male religious leaders urging men to take up “headship” over their wives, there are fewer women advocating such views—and very few who do in the extreme manner that Wiid does. She teaches that it is the wife’s Christian duty to enable her husband to take his rightful position as the head of the household. The wife bears responsibility for making her husband feel like a “real man,” both sexually and socially. According to Wiid, husbands—in this case white Afrikaner men—are in dire need of social, psychological, and spiritual affirmation. This affirmation is facilitated when a wife shows honor and respect to her husband, bolstering his masculine identity, submitting to him as a leader, and treating him like a “King.”

The wife must focus on her husband’s physical and emotional needs to enable him to positively answer this fundamental question: “Am I man enough?” Wiid suggests that a primary way a wife can help is through pleasuring him sexually. Professors Nadar and Nortjé-Meyer, who have done extensive research on the Worthy Women movement, say that Wiid advocates a form of heteropatriarchal “formenism” where the rights, identity, and even wellbeing of women are regarded as secondary to the wellbeing and flourishing of men.

This theology reaches from the individual woman to the wider political sphere. The Worthy Women movement teaches that when a woman fulfills her sexual and psychological duties towards her husband, the correct order in the family is established, which will in turn lead to the restoration of “order” in South Africa. Wiid promises a utopian life to women when they submit to their husbands, saying that they will be “safe in paradise.” The personal is understood to directly relate to the political. She claims that female sexual and psychological subordination will not only lead to more harmonious households but will make South Africa safer for these women and their families since it will be transformed in to what Wiid refers to as a “Christian country.”

Contemporary challenges to white Afrikaners’ historic privilege are central to understanding Wiid’s popularity. In the decades since the end of political apartheid, the social, economic, and political realities of white South Africans have undergone broad changes, posing significant challenges, and for none more so than white Afrikaners. These major shifts have been an important, necessary project, aiming at a more just, inclusive economic, political, and social dispensation in which all South Africans have equal rights and an equitable share of the nation’s resources. Yet, as Prof. Willem Fourie (University of Pretoria) notes, the socio-political reality of white Afrikaners shifted from, “one who was in power, to one who was willing to share power, to one who was finally powerless.” The sense of loss associated with these shifts is most often expressed as a loss “of power, of status, of economic, social and political advantage.”

It is here that Wiid’s theology thrives. Addressing the insecurities of a group now facing massive shifts in identity, economic privilege, and political standing, she promises a way of protecting, even recovering, the group’s previous privilege through a socio-political order that will emerge through her theological prescriptions for gender roles in the home and in society.

One could conclude that the bargain of subservience for a return to white privilege is doomed. Firstly, it theologically problematic since it misinterprets Christian scriptures and goes against key Christian ethical principles, such as the equal dignity of all human persons, particularly the dignity of women. It is also politically and socially problematic since it seeks a better future by establishing a society resembling South Africa’s apartheid past of racially unequal privilege, rather than a more equitable and just future, shared by all South Africans regardless of race.

If Wiid had her way, her misinformed theological views on sexuality and marriage would guarantee for Afrikaners the privileges of their apartheid forbears. For this group of women, the subservience-to-politics program seems like an effective political strategy. It also seems that the goal of the strategy, a return to the “utopia” of white privilege, is more “worthy” than working for justice and economic and political transformation that will secure a better life for all South Africans. For many others, it sounds eerily similar to the ‘dystopia” of The Handmaids Tale.

Counterpoint blogs may be reprinted with the following acknowledgement: “This article was published by Counterpoint Navigating Knowledge on 12 June 2019.”