Who Knows the Day and the Hour? Date Setting, Climate Change, and Apocalypse 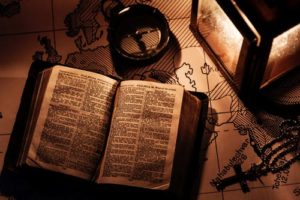 We have twelve years to save the world. When I first heard this statement in June 2018, it was a reference to the work of Kevin Anderson, the climate scientist whose calculations suggested that within twelve years, the average global temperature would rise 1.5 degrees above preindustrial levels. In October 2018, the IPCC released a report warning that we would experience catastrophic impacts if the average global temperature increased more than 1.5 degrees, which at current emissions rates would occur in twelve years.

In January 2019, American congresswoman Alexandria Ocasio-Cortez refracted the results of this report on Twitter, declaring that the world is going to end in twelve years if we don’t address climate change. Ignoring the fact that these statements were made months apart, and by now, in September 2019, we surely must have only eleven years left, there seems to be a persistent, credible, disorienting thrum of voices predicting the end of the world. Climate change is the apocalypse.

But what if it’s not twelve years? What if it’s next year? Hans Joachim Schellnhuber, founder and director emeritus of the Potsdam Climate Institute, predicts that if the upward trend of carbon emissions is not redirected downward during 2020, it will be too late. The climate math determines it to be so. Some critique the IPCC predictions as too conservative. They do not take into account feedback loops or the amount of heat stored by the ocean, which warms far more slowly than the atmosphere or the land. This stored-up heat slowly turning over in the depths means that the planet will continue to heat up even if we stop burning fossil fuels entirely, right now.

Such predictions emanate from the scientific mainstream. On the fringes, warning signs of runaway climate change leading to mass extinction are foreseen. Global omnicide due to the release of methane from the sea floor as the Arctic melts could begin by 15 July 2020 at the earliest. Or perhaps we have until 2021, before we all die. A renowned doomsayer, Guy McPherson, was a climate scientist at the University of Arizona before he moved off grid because he predicted near-term human extinction due to climate change. He gives the world until 2030, maybe. While prophecies of doom may be growing in popularity, such voices lack influence when compared with climate-change deniers who wield political power and public platforms.

Date setting is an easy target for deniers. Lists of failed predictions of the end of ice or the beginning of the next ice age are fodder for right-wing think tanks and media outlets to muddy the waters of climate projections. They make lazy jokes about having twelve years until the timeline changes again, mocking Ocasio-Cortez, even comparing her to Archbishop Ussher, who in the seventeenth century calculated the date of creation based on biblical references.

It is also difficult to set such dates with any accuracy. A lack of precision means that these dates may pass and nothing happens, which builds complacency and further emboldens deniers. Sensitive to this problem, science communicators make more nuanced arguments for urgent change. Katharine Hayhoe, a climate scientist and Evangelical Christian, calls such dates and temperature targets “magic numbers” that lack a scientific basis. Even before we reach a 1.5 or 2 degree increase, the impacts of climate change could cause significant loss of life and destruction of property. Indeed, with increased temperatures making hurricanes like Dorian more intense and longer lasting, climate change is already dangerous, and it is already happening. The apocalypse is now.

Calculating the day when the world will end is as old as millenarianism. Predicting the end of the world leads to calls for a specific date: Tell us when it will come! Since I began researching millenarianism in 2011, I have observed more than one prediction of the end approach and pass by with no event. The American Pastor and Christian radio broadcaster Harold Camping prophesied that the world would end on 21 May 2011. When nothing happened, he changed the date to 21 October 2011. He died in December 2013.

Some people correlated 21 December 2012 with the end of the Mayan Long Count calendar. In popular culture, this became another potential date for the apocalypse, despite experts on Mesoamerica arguing that it merely signified the end of one calendar period, not a cataclysm. I was in Sedona, Arizona at the time, where a man named Peter declared that a portal would open on that date. He planned to jump through it in a leap of faith to reach the source code of the simulation that we live in, rewrite the code, and save us from a virus that was poisoning our air, water, and food. A small group of people waited on the top of a rock in Sedona for fourteen hours on 21 December to see if the portal opened and if Peter would jump. We climbed down at midnight. Nothing had happened. A few months later, Peter determined that the portal would open on 21 December 2018 instead.

Responses to the failure of millenarian date setting are formulaic. Most believers find a way to incorporate the failure into their beliefs. A classic sociological study focused on a group called the Seekers and their prophet, Marian Keech, who believed a UFO would come to save them on 21 December 1956, as the world ended in cataclysm. In their analysis of the adherents’ struggles to come to terms with the failed predictions, the authors coined the term cognitive dissonance.

The history of millenarianism teaches us that date setting is not a useful framework for scientific projections about climate change. While providing a date can galvanize action in the short term, scientific credibility is undermined when the disaster does not happen by the deadline provided.

Climate change is not a matter of belief. Its impacts are already happening, affecting the most vulnerable first. There is no more time to wait. The end is already here.

Susannah Crockford is a post-doctoral researcher at Ghent University in Belgium. As part of the European Research Council funded NARMESH project, she is currently working on an ethnography of climate change discourse. She earned her PhD in anthropology in July 2017 from the London School of Economics, and previously completed an MA in religious studies at the University of Amsterdam and an undergraduate degree in anthropology at the University of Cambridge.

Counterpoint blogs may be reprinted with the following acknowledgement: “This article was published by Counterpoint Navigating Knowledge on 25 September 2019.”

[…] in order to heal the ways we inhabit this planet together. Thus I read Susannah Crockford’s post and, facing my own lack of comprehension about climate change, I feel newly like “the apocalypse […]