Which Comes First? Trust or Truth? 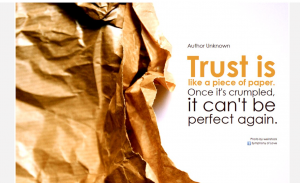 Trust in our institutions is crumbling—churches, governments, science, higher education, etc. The  list could go on indefinitely. This is a problem in my home country, the United States—so I’ll focus on this example, but it is a worldwide issue. A recent survey in The Chronicle of Higher Education reports a dramatic drop in just two years “in the percent of Americans who said colleges have a positive effect on the way things are going in this country.” In 2020, that number was 69%; in 2022, that number now stands at a mere 55%.

The Pew Research Center reports that American trust in medical scientists has also plummeted: “Overall, 29% of U.S. adults say they have a great deal of confidence in medical scientists to act in the best interests of the public, down from 40% who said this in November 2020.” That same Pew study reports that levels of trust are also down for the military and even public-school principals.

Yet it is possible that our lack of trust in institutions is unwarranted. It may well be that many institutions are working better than we believe. The trouble is that the relationship between perception and reality is intimate and quite likely causal, a self-fulfilling prophecy. Suppose millions lose trust in the US Postal Service. If consumers abandon the USPS in droves, substantially cutting its revenue, then what has been one of the most efficient and cost-effective branches of the US government would soon be unable to provide affordable services to its customers. Where there is no trust, there can be no efficacy. Perception very quickly becomes reality.

But there is also another looming and related problem: the truth problem. What if trust creates the conditions under which we are able to determine what the truth is? We have been taught (with good reason) to believe that trust must be hard won, that those to whom we would grant our trust must survive rigorous scrutiny. We trust them because they are truthful. This position may be summed up as follows: first comes truth, then trust.

Only the relationship between truth and trust is more complicated. It may also be that trust must come first!

We are beginning to recognize that living inside a sea of universal suspicion dissolves the very conditions for accepting that certain information or ideas are true. If I am suspicious of every major institution, of researchers, field-specific experts, doctors, teachers, and even my neighbors, it becomes impossible for me to gather information that I consider reliable and that can be the basis of sound decision-making grounded in truth.

Why? Because few of us are in a position to conduct our own experiments or investigative reporting, undertake clinical trials on the efficacy of our medications, or verify the safety of our food supply. We are indebted to a variety of others whose good work we must trust as competently done and as providing accurate information so that we can get on with our daily lives. Living with an X-Files “Trust no one” mentality sabotages the possibility of “arriving” at truth because we cannot accept anyone’s else’s work as accurate.

Ironically, even Fox Mulder, the hero of the X-Files, knew this. In a telling quote from Season Two, Mulder makes this poignant pronouncement to his partner: “Deep Throat said, ‘trust no one.’ And that’s hard, Scully. Suspecting everyone, everything, it wears you down. You even begin to doubt what you know is the truth. Before, I could only trust myself. Now, I can only trust you . . . and they’ve taken you away from me.” Even the fictional patron saint of suspicion, Mulder himself, recognized that adopting an attitude of pervasive suspicion is a corrosive acid that cuts through the bonds of trust, within which we can come to believe that anything or anyone might be true.

Perhaps this level of distrust is emerging now because many have been betrayed by powerful institutions. Consider the explosion of sexual abuse crises in Christian churches both Catholic and Protestant. Consider the discovery of the bodies of Indigenous children on the grounds of Canada’s church-run residential schools. Haven’t a number of our institutions earned our suspicion?

Fair enough. The crises of trust that marks our common lives have not arisen without reason. But stopping there is simplistic. The truth is that trust itself is the common currency of our lives. We trust that our food delivery guy has not poisoned our food. We trust that our $20 bill is worth something; if we don’t, it’s just a worthless piece of paper. We trust that the floor and the chairs on which we are sitting will bear us up. So, when trust takes a comprehensive hit and suspicion becomes the rule of the day, the very possibility of shared life takes a hit.

We might need to repurpose the language of nuclear weapons treaties: “Trust but verify.” Procedures of accountability and transparency must be put in place within institutions so that they might be accounted trustworthy. But that alone won’t fully fix the problem. We must also learn to trust again.

Trust has taken a hit in our societies for reasons other than institutional betrayal. As social media experts have taught us and as our own experience on the web has shown, social media misinformation is being weaponized to rupture the bonds of trust that make shared life possible. Scottie Barsotti, of Carnegie Mellon’s Heinz College of Information Systems and Public Policy, puts this with economic elegance: “Without dropping a bomb or firing a shot, nations can do tremendous harm to one another through cyberwarfare. But even without, say, hacking into a power plant or weapons system, malicious actors can erode trust in institutions and breed an atmosphere of contempt, distrust, and even violence among citizens.”

Even the US Army has recognized that misinformation and the erosion of trust must be factored into their military strategies. A US Army website writes, “Today, actors seek to quickly spread false information to erode public trust in traditional alliances and institutions. In the near future, a comprehensive assault on authenticity could be achieved through disruptive technologies like deep fakes, artificial influencers, AI-generated news and dialogue, and virtual/augmented reality.”

Nefarious actors from Russian troll farms and within the US know the value of trust and work to erode it in order to destabilize societies. That erosion of trust also undermines the ability of institutions to show us that they are trustworthy and our ability to accept that they are. This happens not only because the information commons is polluted with fake news and conspiracism but also because our willingness to trust at all has been undercut.

What might this mean for us in practical life? Counterintuitively, it might mean that we must first start trusting each other as a radical leap of faith which begins to rebuild our common lives. It’s a radical act to trust each other when a variety of forces is seeking to erode the basic trust that makes life together possible. Yes, “trust but verify” is the pragmatic way to go, but without trust even verification is impossible. We wouldn’t trust any of the information that would serve as the basis of verification. So, counterintuitively we must be willing to trust a bit so others can show that they are trustworthy, and together we can find our way to greater trust and perhaps truth.

John Thatamanil  is Professor of Theology and World Religions at Union Theological Seminary. He is also Priest and Volunteer Curate at the Anglican Church of St. John the Divine in Victoria, BC, and Theologian to the Diocese of Islands and Inlets. He is the author of Circling the Elephant: A Comparative Theology of Religious Diversity.

Counterpoint blogs may be reprinted with the following acknowledgement: “This article was published by Counterpoint: Navigating Knowledge on 31 August 2022.”