What Time is Now: Nonlinearity and Climate Activism 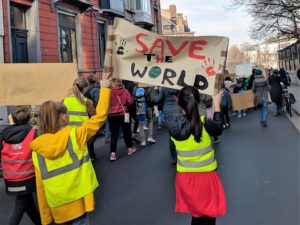 Lately I’ve been thinking a lot about nonlinearity. Though simply it means that the line between point A and point B is often not a direct one, it can be put more complexly. A nonlinear system is one in which the change in the output is not proportional to the change in the input. Such systems are characterized by dynamism. The relationships between variables are unstable. Changes in these relationships are subject to positive or negative feedback loops which amplify or reduce those changes. Existing structures breakup. Unexpected outcomes are created. The result can be a new equilibrium, or novel forms of increasing complexity, or a state of chaos in which uncertainty dominates and predictability breaks down. Nonlinear systems are the stuff of biology, engineering, and mathematics, but it should be no surprise that the social world is also inherently nonlinear, unpredictable, and uncertain (see Kiel and Elliott 1997).

So is the climate system. Many of the uneven, surprising impacts of climate change are the results of nonlinearity in the ocean-atmosphere system, in particular the mechanism of hysteresis or the dependence of the state of a system on its history. The ocean has absorbed 93% of the heat produced by humans since the 1970s. But the ocean’s capacity to absorb heat is not infinite. This history is producing outcomes that humans experience as unexpected. Changes in the system also create tipping points, such as when ice sheets suddenly collapse or forests can no longer grow back after fires. We experience unexpected outcomes, and uncertainty dominates.

The social world has its tipping points too. The problem of the changing climate is perhaps reaching the point where it is impossible to ignore, or peak indifference. Growing concern about climate change is evidenced in recent surveys. Activism can then shift from trying to convince people there is a problem to trying to convince them of the best solution to the problem. But it may be too late to implement solutions: the window for action is closing. We may have to begin to confront the possibility of living on a soon-to-be unlivable planet. With three main approaches available—fixing, mitigating, and adapting—it is perhaps time to shift from focusing on the first to the second and third. We may have to rethink activism to take on board what it means to live on a dying planet.

Yet activism itself is nonlinear. The outcomes often far exceed their origin. A 2015 video of removing a plastic straw from the nose of a sea turtle had an impact vastly beyond the size of the straw or the turtle. It has now reached over 34 million views on YouTube. Through showing the suffering of a creature caused by something so briefly used and so quickly disposed of, it created emotional resonance and impetus that led, indirectly, to companies and municipalities banning the use of plastic straws. One object can have an impact in excess of its size.

One person can have an impact in excess of their size also. Swedish teenager, Greta Thunberg, lapsed into a serious depression when she learned of climate change and mass extinction. As she refused to eat and speak, her family despaired. Then they started listening to her. The family switched to a vegan diet. Her mother stopped flying, effectively ending her career as an international opera singer. In August 2018, Greta sat down outside the Swedish parliament with a sign. She began a school strike for action on the climate. Other children joined around the world. Alexandria Villaseñor sat alone outside UN building in New York. Lilly Platt, ten years old, sat outside the town hall in Zeist, in the Netherlands. From these individual actions, thousands have joined in across the globe. On March 15 over 1 million marched worldwide for a global strike for the future. Greta Thunberg has met with the European Commission, spoken to the World Economic Forum and to the UN summit on climate change, COP24 in Katowice. Her efforts have been rewarded with promises of more money to fight climate change from the EU and a nomination for the Nobel Peace Prize.

Of course it is a cliché to say one person can make a difference. I marched on March 15 in Gent, Belgium, and the outcome would have been the same (most likely) if I had stayed in my office and worked. But the output of social action is not directly linked to the input. Sometimes you sit down in front of a government building, and nothing else happens. Sometimes you sit down and you move the world. In nonlinear systems, it is difficult to predict the effect or the efficacy of any single action. The point of activism should not be to expect a certain outcome. The point is to do what you can until you can’t.

Susannah Crockford is a post-doctoral researcher at Ghent University in Belgium. As part of the European Research Council funded NARMESH project, she is currently investigating the role of narrative in conceptualizations of the interconnection of humans, non-humans, and climate. She earned her PhD in anthropology in July 2017 from the London School of Economics, and previously completed an MA in religious studies at the University of Amsterdam and an undergraduate degree in anthropology at the University of Cambridge.

This Counterpoint blog post may be reprinted with the following acknowledgement: “This article was published by Counterpoint: Navigating Knowledge on 03 April 2019.”

[…] rather than from the centers of power. Often it comes unexpectedly, as Susannah Crockford argued on this blog. It comes from the counterpoint that runs against the well-known patterns of […]