What Not to Say When You Pray 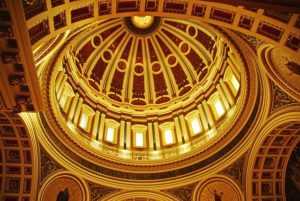 Borowicz however has only reasserted her confidence about her prayer and expressed confusion about how anyone could take offense. In contrast, Johnson-Harrell’s reaction has been clear: she was offended more on behalf of her guests from several religious traditions, invited to her swearing-in, than for herself and she feels that legislators should not be fighting over religion. Johnson-Harrell states, “I do not have a problem with Jesus. I understand more than many Western Muslims how important Jesus is to Islam.”

Borowicz’s prayer strikes some as problematic because in a diverse public assembly within a diverse society, it did not account for or respect the differences in the room. Perhaps at minimum, any shared prayer should as the bill now put forward requires.

But the differences in the room or indeed in society are not just differences. The different positions we have in society are weighted in terms of power. And since Christians have been prominent holders of power in the US since the nation’s genesis, Borowicz stepped up to the podium in a position of power. Meanwhile, Johnson-Harrell, a Muslim woman, stands within a tradition often targeted in the West. So the problem with this prayer was not just one of overlooked diversity. More drastically, the prayer functioned as a power play once again excluding the often-excluded.

The reason this prayer remains so problematic is not that a speaker from one religious tradition was failing to consider another. That is indeed itself problematic, according to the guidance set out for Pennsylvania legislators. But the deeper problem is that a speaker from a dominant, socially hegemonic religious tradition failed to consider traditions often vilified and people often subject to discrimination. As such, the prayer reasserted the Christian hegemony already so deeply woven in the United States public sphere.

In nations where many religious groups attempt to work together in the public sector, working together–and all the more so when praying together—involves more than learning to be aware of and respectful of each other’s differences. It means attention to the ways traditions and groups are weighted, with social advantages allotted to some and social targeting punishing others. Thus, when speakers from societally advantaged positions take the podium, they are speaking from a position of power. Where the goal is to work together in the public sector, it is questionable whether speakers from advantaged positions should ever use their time at the podium to throw their weight around, but certainly common prayer is no time to do so.

What not to say when you pray?  “My group’s in power, and we plan to stay that way.”

Anna Mercedes is Associate Professor of Theology and Gender Studies at the College of Saint Benedict and Saint John’s University and is ordained in the Evangelical Lutheran Church in America. She is the author of Power For: Feminism and Christ’s Self-Giving.

This Counterpoint blog post may be reprinted with the following acknowledgement: “This article was published by Counterpoint: Navigating Knowledge on 10 April 2019.”