What Lies Beneath: Wildfires and Indigenous Fire Knowledge 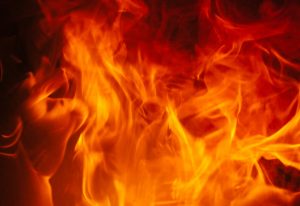 “Follow the smoke,” Ali Meders-Knight told a group of us who had gathered at a local coffee shop to hear about Indigenous environmental practices in northern California. Meders-Knight is a member of the Mechoopda tribe, whose ancestral lands my university occupies. She grew up weaving baskets and was referring to the fact that good basket materials come up after a fire. For instance Beargrass, a popular plant for basketmakers in northern California, produces young leaves after a fire that are prized for their strength and pliability. Basket-making, like many Indigenous California cultural practices, is intimately tied to the history of fire.

The Camp Fire of 2018, the most destructive wildfire in Californian history, took place less than ten miles from Chico where I was listening to Meders-Knight. In the aftermath of the fire, five federally recognized Native groups did cultural monitoring of the burned areas. They attended to what lay beneath the rubble of houses and trees that had to be cleared away, making sure buried artifacts such as arrowheads and mortars were not damaged in clean-up efforts. But the Camp Fire also brought attention to buried knowledge. After the fire, the history of traditional burning practices received increased media and public attention. Although some northern California tribes like the Karuk have been reviving and adapting traditional fire practices for years, there has been widespread ignorance among the non-Native public about such practices. Beneath the charred remains of people’s lives in the towns of Paradise, Magalia, and Concow, devastated by the Camp Fire, is a rich legacy of Indigenous people who lived with fire on the land before Europeans arrived. Until relatively recently, their traditional fire knowledge had been ignored or disparaged in the context of state and federal agencies’ focus on fire suppression.

Before Europeans settled in what is now California and set about a program of massacres, bounty-hunting, and removal, decimating Indigenous populations across the state, traditional fire practices created the landscape some Europeans found so wondrous. As California State University professor Don Hankins, an expert on Indigenous fire practices, puts it, even in the case of John Muir, “The landscape that he fell in love with was a product of that burning and he completely missed it.” Meleiza Figueroa, a PhD candidate in Geography who is working with Ali Meders-Knight on a project to spread Traditional Ecological Knowledge (TEK) explained in an interview for our local radio station that Indigenous Californians practiced “landscape domestication.”

Before the arrival of Europeans, for millennia Native populations treated fire as an ally in working with the land to increase biodiversity, encourage good basket-making plants, facilitate access to Native foods, and carry out important ceremonies, creating and sustaining ties to the land and other living species. These connections are particularly significant today for all people, Indigenous and non-Indigenous, human and nonhuman, as we grapple with the changes coming about due to the climate crisis.

“pananu’thívthaaneen xúus nu’êethtiheesh: We’re Caring For Our World,” the film Meders-Knight was introducing that day in Chico, made the connection between fire, baskets, and other aspects of Indigenous culture. Based in the far northwestern part of California, the Karuk tribe has been particularly proactive in creating projects to respond and adapt to climate change, especially projects including traditional uses of fire. Prescribed burns using traditional knowledge are happening near Chico too. In the past few years, Mechoopda tribal members have been accompanying Don Hankins to the university’s nature reserves, and to Mechoopda lands south of Chico where they set small fires to address the needs of particular ecosystems and of the tribe, such as food or basket making.

In “It’s All Connected: California Basketry, Cultural Context, and Museum Conservation / Practices and Beliefs,” a 2012 blog post on the National Museum of the American Indian website, basket-weaver Deborah McConnell (Hupa,/Yurok/ Quinault) remembers that basket-making was dying out, so the California Indian Basketweavers Association was formed in the 1990s. Central among the Association’s concerns were the effects of environmental issues such as the use of herbicides, logging, erosion, and especially fire suppression, on basketry materials. For decades basket-weavers were not allowed to continue their traditional burning practices, such as setting low intensity fires to clear undergrowth. When traditional practices were suppressed, the understory became more dense, thus fueling higher intensity catastrophic fires that destroyed basketry materials (and much else).

But in more recent years, McConnell notes that state and federal agencies have begun to pay attention to Indigenous practices and that “using fire to promote healthy ecosystems” is happening again. As McConnell puts it, “Our holistic outlook on life is inclusive of our social, physical, and spiritual environment.” “Fire is Medicine” according to pananu’thívthaaneen xúus nu’êethtiheesh: We’re Caring For Our World. Several people interviewed in the film stressed that healthy forests shaped by fire promote the well-being of people and culture.

Disasters related to climate change offer an opportunity to revive Native knowledge and address the effects of colonization. Programs that involve tribes facilitating certification in TEK for Native and non-Native people have the potential to create what Meders-Knight calls “boots on the ground,” a cadre of local people doing forest restoration and preparing the land to be more resilient during climate change. Communities and government agencies should support local tribes in making their long histories on the land more visible in public spaces and in public initiatives and should grant tribes leadership roles in restoration and fire stewardship.

Dr. Sarah M. Pike is Professor of Comparative Religion and Chair of the Department of Comparative Religion and Humanities at California State University, Chico. She has written numerous books, articles, and book chapters on contemporary Paganism, ritual, the New Age movement, the Burning Man festival, spiritual dance, environmentalism, and youth culture. Her latest book, For the Wild: Ritual and Commitment in Radical Eco-Activism, was published by the University of California Press in October 2017. She is currently working on a project about relationships with the land after wildfires.

Counterpoint blogs may be reprinted with the following acknowledgement: “This article was published by Counterpoint Navigating Knowledge on 17 March 2020.”