This is Not a World of One: Our Separability-Amid-Situatedness 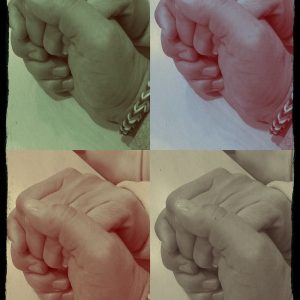 What’s the disconnect? I’m sitting in Washington Square Park in N.Y., which I treat as my “backyard” as its curving paths and grand old trees are a block from my door. All sorts of folks are walking, cycling, and skateboarding by. Some are wearing masks, some have them pulled down below their chins, and some—my favorite—have them dangling from one ear like jewelry from some future medicalized dystopia.

For those who do not have the mask over nose and mouth, I wonder: what is the disconnect between the information we have about virus spread and their behavior?

For half a year, we’ve been seeing the numbers of cases and deaths drop with mask-wearing and social distancing. We’ve seen them rise when caution is thrown to the wind. Now the young count for a substantial number of the sick as they are often the caution-throwers. We’ve heard the medical advice with tedious repetition: wearing masks protects others from possible infection by you.

If everyone wears a mask, we just might live long enough to fight about who gets a vaccine first. If you believe you won’t get sick, ok. But—everyone all together now: wearing a mask protects others.

What part of “others” don’t folks understand?

I don’t mean the folks for whom refusing to wear a mask is political resistance against government tyranny. In the U.S. through May and June, anti-mask protests—often against social distancing regulations set by Democratic governors—erupted across the U.S. on anti-tyranny grounds. The Republican governor of Ohio, Mike DeWine, revoked an order that required mask-wearing because people “were not going to accept the government telling them what to do.” Never mind that we have to stop at red lights, wear seatbelts, and follow a raft of other government regulations for societal safety. Precautions against the coronavirus became government oppression to be resisted in the fight to save liberty. “We want to make sure,” Texas governor Greg Abbott said in June, when his state was setting record levels of coronavirus cases, “that individual liberty is not infringed upon by government and hence government cannot require individuals to wear a mask.”

That’s a lot of “I”s. Not a single person meant harm to anyone else. It’s just that no one else was in their view.

Everyone—all of us—has unarticulated, pre-conscious assumptions about how the world works. In philosopher Alvin Plantinga’s words, we develop them in “the basic way” (p. 242–243), from the interaction of our minds with our physical, psychological, and social experiences. We are “hard wired,” Plantinga says, to make beliefs in this way and we grant them substantial “truth value.” The “basic way” is pre-logical and non-propositional. We don’t go through logical argument or hypothesis testing to know most of the things we assume about the world. When we get up in the morning, we don’t run experiments or logical deductions to determine if the floor is still there. We just get up and stumble sleepily into the bathroom.

I’m thinking about the “basic way” view of the world that all those “I”s suggests. Before logic or hypothesis testing are considered, what’s unconsciously on people’s minds when they get ready to leave the house? Who besides oneself is “present”?

In cultures that emphasize the networked self, there is no isolated “I.” All “I”s are situated among networks of others. And that as a psychological and social experience is, along with the physical world, what the mind interacts with to form “basic way” assumptions about the world—and who’s in mind when one leaves the house. Bottom line, “others” are built in to one’s worldview.

The disadvantage of the networked or situated self can be insufficient wiggle room for the separate, individual “I.” This opens the door to top-down oppression, with few rights and options for the person, and to bottom-up conformity pressures and group-think. To avoid these, the separable “I” must be preserved amid the network of relations that acculturate each child and guide her to become who she is.

I’ve called this separability-amid-situatedness. We become our singular, separate “I”s through the layered networks of interactions with others and our environments—through our situatedness.

In my home, the U.S., the notion of the individual “I” separated from her situation—from relation and environment—has run amok. When uncoupled from situatedness among people and place, its advantages in individual creativity, possibilities, innovation, and rights turn into self-absorption. This can be economic self-absorption, “more for me, my firm, my party.” Or it can be emotional, psychological self-absorption. And that as a cultural and social experience is what the mind interacts with to form “basic way” assumptions about the world—and who’s in mind when one leaves the house. Bottom line: “others” are not quite so built in to one’s way of seeing the world.

This is not generally true of western or American culture, which is grounded in a more balanced separability-amid-situatedness—in the biblical Golden Rule, in Immanuel Kant’s Categorical Imperative to do only what one would want all others to do, in Aristotelian notions of contribution to the republic, and in what used to be called civics classes with their notion of responsibility to the common good.

That sort of outlook might lead one to err on the side of caution for the sake of others and thus to mask-wearing and social distancing when in their presence.

I am concerned when resistance to medical precautions is understood as a political fight against tyranny. But I’m also concerned about a “basic way” view of the world as peopled with one person—me.

When I sit in my “backyard” and watch people go by unmasked and not maintaining social distance, I find myself wanting to yell out, “Yo, ya’ know, you live in the world with others. They’re all around you. Have a look.”

Professor Marcia Pally teaches at New York University and is a regular guest professor at the Theology Faculty of Humboldt University Berlin. Her most recent books are Commonwealth and Covenant: Economics, Politics, and Theologies of Relationality (Eerdmans, 2016), Mimesis and Sacrifice(Bloomsbury Academic, 2019), and The New Evangelicals (Eerdmans, 2011). Commonwealth and Covenant was nominated for a Grawemeyer Award in Religion and was selected by the United Nations Committee on Education for Justice for distribution worldwide. In addition, Prof. Pally has been a columnist and contributor to US and European periodicals, including Religion and Ethics, Commonweal, The New York Times, The Guardian, Religion News Service, Die Zeit, Süddeutsche Zeitung, and Tageszeitung, among other periodicals.

Counterpoint blogs may be reprinted with the following acknowledgement: “This article was published by Counterpoint: Navigating Knowledge on 14 July 2020.”