The Weight of Evidence 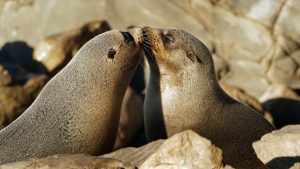 The late neuroscientist Jaak Panksepp would remind people that science doesn’t give us proofs and certainties but only the weight of evidence. The weight of evidence in his field of inquiry suggested that other-than-human animals are conscious beings, and that this consciousness – experiential/phenomenal consciousness: the feeling of the self, not necessarily the thinking of the self – originates in more ancient brain regions that humans share with other animals. Traditionally, it had been believed that the neocortex was the seat not only of “conscious thought, but also of emotional feelings,” with the latter being viewed as a form of thought, as Panksepp explained. Given that the neocortex can vary substantially among mammalian species—see this informative picture—and that non-mammalian species don’t have one, it’s not hard to imagine how many humans were left pretty confused as to whether other animals have emotions and/or what the nature and intensity of these emotions may be.

Deemed out of scientific reach, for a while nonhuman animal subjectivity was banned from scientific and philosophical discussion, non-observance attracted accusations of “anthropomorphism” which basically covered any kind of attribution of emotion and intention to nonhuman animals, and which could cost people reputations and even jobs. Towards the end of the twentieth and beginning of the twenty-first century the tide started to turn, paranoia and anthropocentric chauvinism began to recede and leave more space for genuine, humble inquisitiveness. And under the weight of this new evidence, in 2011, a group of prominent neuroscientists issued the Cambridge declaration on consciousness, which states that nonhuman animals are conscious beings – not a big surprise to anyone who has ever had anything to do with other animals, but an important step nonetheless.

Throughout the twentieth century, when discussions of nonhuman animal subjectivity were effectually banned, animals’ subjective experiences nevertheless continued to exist, and animals suffered profoundly under the pretense of scientific rigor. Ironically—and this would indeed be very humorous if it wasn’t so tragic for the real, living nonhuman individuals, victims of human ignorance—the main reason that animal subjectivity was not evidenced was that no-one was looking for it. The weight of evidence doesn’t just happen; someone has to produce that evidence. That in itself complicates things further because, as Iain McGhilchrist reminds us, “the nature of attention one brings to bear on anything alters what one finds.”

There is thus, inevitably, a strong subjective (including gender-based) component tainting the objectivist project. When we are designing experiments to test nonhuman animals’ emotional and cognitive capacities, for example, we first choose which species we are going to test. That means that some other species doesn’t get tested, as a consequence, and unless someone else does it, there won’t be any evidence in this second species of whatever we are looking for in the first one. Another problem could be finding ways to communicate the research question to the species/individual tested, obviously we can’t just ask them using human language. We have to devise clever ways of asking and making sure the tested subject understands. Sometimes we succeed, other times we don’t. In the latter case we end up with no evidence for that particular thing in that particular species, not because they failed but because we failed. Another important aspect is the complexity of the question: are we asking complex questions or simple ones? And why? Do we assume that there is no complexity that we could possibly find in a specific species?

This has often been the case. Philosopher Vinciane Despret explains, speaking primarily of primates and sheep (but valid for many other species): “The more research advances, the more interesting the questions about apes become, and the more these animals turn out to be endowed with elaborate social and cognitive competencies. By contrast, questions about the others still primarily concern what they eat.”

Things are slowly changing and more research is conducted on traditionally neglected species such as “farm” animals, or kangaroos who have only recently been shown to have “some cognitive abilities of interest,” as researcher Allan McElligot notes. In both cases maybe we’ve had good reasons not to look too closely at their competencies. Do we really want to know how cognitively and emotionally sophisticated the victims of the largest commercial slaughter of land wildlife are? What they may think and feel when they watch babies being head-bludgeoned to their premature deaths? Or farm animals—that face on your plate—the sheep, the pigs, the cows, the hens, and others; isn’t it better to not think about them that way?

I slipped one rainy morning taking grass pellets to my rescued sheep. I fell and the pellets spread in all directions. The sheep gathered around me, a few ovine-paces away from me, and, dutifully ignoring the pellets, began sniffing in my direction. “How are you? How is she?” they must have been wondering, as I remained on the ground, immobile, waiting for the acute pain in my leg to subside, and wondering myself: “How am I? What are you smelling? How much do you know?”

It is easy to get absorbed in the fascinating topic of other animals’ feeling, thinking, and knowing generally and communication specifically. You may step into the garden one day (or go for a walk in the woods, or down the street in a big city or a small town, take a dip in the ocean or dig into the ground) and, like a little Doctor Dolittle, find the world is no longer what it used to be; it is alive and speaking—all of it: that slug crawling along the path is leaving a trail that contains meaningful information for the slug-language-literate, that chirping bird is also saying something that is not just “chirp-chirp,” and others—all of them, all of us, with our own “voices” and messages that are meaningful to us and those who can read us.

And that’s only the animal realm. What about the acacia? And others?

And why should we know even when we don’t want to? Human impact upon other forms of life is inevitable. Not knowing, and not thinking about it, does not relieve our weight of responsibility.

Counterpoint blogs may be reprinted with the following acknowledgement: “This article was published by Counterpoint Navigating Knowledge on 12 January 2021.”