The Role of Indigenous Women in Ecological Activism: Deforestation in North Sumatra 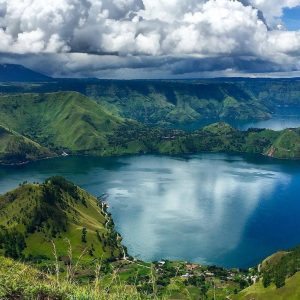 The deforestation of indigenous peoples’ land in North Sumatra is a long, ongoing problem. One such community is the indigenous people of Pandumaan Sipituhuta. The homeland of this community is in Tano Batak, Humbang Hasundatan district, North Sumatra. The majority of indigenous peoples there work as farmers. Many of their beliefs center on the Haminjon tree which produces a sap used in incense, and is thus both an economic source and part of their ancestral heritage. The Haminjon tree is the incarnation of a woman from ancient folklore. The Haminjon sap (kemenyan) is the woman’s tears that give life to the indigenous people of Pandumaan Sipituhuta. It is said that this tree originated from a woman in the village of Pandumaan Sipituhuta. This woman was exiled because she had violated some village customs. She was banished and placed in the forest alone. A few years later, her parents searched the forest for her, and when they found her she was transformed into a tall and big Haminjon tree.

Indigenous women in North Sumatra and other places in Indonesia have become victims of structural and development imbalances through the exploitation of forests. So-called development programs have created social conflicts and environmental destruction even robbed women of their rights. It is women who most easily lose their source of livelihood due to deforestation, land grabbing, and agrarian conflicts.

In line with this, Zoe Todd argues that the close relationship between humans and nature is an indigenous adat (or customary practice), and it shapes discussions about history, government, cosmology, and the legal order of the community. Natural damage due to deforestation results in the destruction of the world order which can threaten the future of an indigenous people. One of the impacts of deforestation is structural land cover changes that affect important ecological processes such as species migration. The direct drivers of deforestation (having a lot to do with palm oil production) in Indonesia are spatially and temporally dynamic, highlighting the need for tailored forest conservation policy responses at the subnational level, and new methods for monitoring the drivers of deforestation over time.

In the case of deforestation, President Jokowi gave 4 decrees on customary (adat) forests in Lake Toba in February 2022, but the problems of the indigenous people of Lake Toba have not been resolved. There are still many problems and agrarian conflicts that must be seriously resolved. The relationship between humans and nature is part of the indigenous peoples’ cosmology, and it binds them to a balanced life between their relationship with God and care for nature.

In developing an ethics of care, one should take into account the late twentieth-century cultural feminist notion of a “care ethic” and its impact on ecofeminist thought and practice. In the Toba area, many indigenous peoples consider the earth as mother and sky as father. The two become together, nature. Heteronormativity aside here, the deforestation of Sumatra rips this intricate cosmology asunder. The PT Toba Pulp Lestari (TPL) and PT Dairi Prima Mineral (DPM)  companies in North Sumatra have, for over three decades, seized customary land and thereby adversely affected rural women‘s rights in the Toba region and destroyed incense forests. Recent zero-deforestation commitments may not have had a major impact on deforestation in Sumatra, where Palm Oil plantations have increasingly expanded to non-forest land over the past twenty years. This damage has contributed to a climate crisis that makes it even more difficult for farmers to determine the planting season, and increases crop failures due to unpredictable weather.

Efforts to reduce deforestation are increasing worldwide through the implementation of climate change mitigation schemes. Activists and indigenous women have a huge role to play in fighting deforestation in North Sumatra, and thereby in the mitigation of climate change. Current anthropocentric actions always disturb the harmony between humans and nature. The phenomenon of deforestation has a negative impact not just on the climate and local ecosystems, but on indigenous women’s rights. These indigenous women in North Sumatra may not use the language of eco-feminism, but they act as ecofeminists by protecting their lives, the life community of the forests, and thus their cultures.

Bibi Suprianto is a student at the Center for Religious and Cross-Cultural Studies (CRCS) of Universitas Gadjah Mada (UGM), Yogyakarta. He is active in publishing articles in several journals in Indonesia. His articles address Islam and ecology, human-nature relation, religious conflict and Islamic strategies of peacebuilding, and exploring symbols of Christianity. He is also preparing his thesis in the postgraduate program at CRCS UGM about Eco-pesantrens.

Counterpoint  blogs may be reprinted with the following acknowledgement: “This article was published by Counterpoint: Navigating Knowledge on 27 September 2022.”