The Butterfly Effect and the Coronavirus: The Truth of Interrelatedness 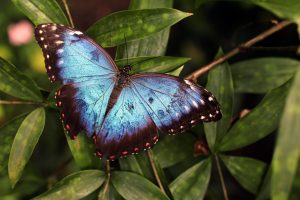 A butterfly flutters its wings in the Amazon and triggers a typhoon in China—some version of that image, with varying locations for the butterfly and the storm was all the rage in popular discussions of chaos theory three decades ago. At a technical level, “the butterfly effect” names how the most delicate fluctuation of initial conditions in a complex system can ramify far beyond calculation as causal connections extend outward. It also serves as shorthand for the truth of radical interconnectedness, every single element in reality bound to everything else.

The events of the last two months have jolted us awake to the truth that the butterfly has to teach. Patient Zero coughed in China, and this week, California and New York are on lockdown.

There is a temptation to speak of interconnectedness solely in laudatory and romantic terms, but as COVID-19 transmission demonstrates, intimate ties, when left untended, can wound as well as heal. Interrelatedness can bring bane as well as blessing, but there’s no negating it. You cannot build “big beautiful walls” against reality; no matter how we might try to sever connections between each other, inseparability will reassert itself. We are like spiders bound up with the webs they spin. Trying to sever the web of our interconnections makes about as much sense for us as for household arachnids.

Although chaos and quantum theories confirm that “all reality is interaction,” to use physicist Carlo Rovelli’s turn of phrase, this truth is as old as the hills. It is a central tenet in religious traditions east and west, ancient and modern. The truth of relatedness rests squarely at the heart of Buddhist traditions which affirm that reality is dependent co-arising (pratityasamutpada). In modern religious thought, exponents include Jewish philosopher Martin Buber who affirmed that “All real living is meeting,” and Martin Luther King, Jr. who preached that “We are caught in an inescapable network of mutuality, tied in a single garment of destiny.”

So, what then of social isolation and quarantining? Are they futile attempts to rend King’s garment of destiny? No, isolation is a temporary mitigation strategy that understands all too well just how porous, fluid, and intertwined our bodies are. We distance because we cherish all those to whom we are bound. But prolonged isolation is no more natural for the general public than it is for those placed in inhumane solitary confinement. We can no more easily endure being starved of touch than we can of food. We need each other if we are to remain healthy, a truth that applies to persons, cultures, nations, and religions. Every form of xenophobia is a quixotic revolt against reality itself.

To be convinced of the truth of relatedness leads inexorably to one logical conclusion: my well-being and yours are inseparable. I cannot flourish at your expense, no matter that you live in China and me in Manhattan. The zero-sum logic that aims at winning, “so much winning,” at the expense of others is a metaphysical impossibility.

The only rational commitment to adopt in an interconnected world is a commitment to work for the welfare of all beings, not just some. An interrelated world cries out for universal compassion and loving kindness. Moreover, in a complex world of radical interdependence, compassion cannot be confined to interpersonal kindness. No single person nor corporation has the capacity to account and care for the billions of ties between peoples in a globalized world, ties forged by air travel, the internet, mass media, global commerce, and, yes, disease vectors. Compassion and love must find structural expression; our private and public institutions must be mobilized not in competition of each against each but for the sake of cooperation of each with all. Leaders who lack the capacity to intuit interrelatedness are not only obsolete; they are, in the long run, more destructive than the pandemics they abet.

It is telling that the one institution that has shined most brightly in the midst of this crisis has been the World Health Organization (WHO). WHO staff know that pandemics care not a whit about Narendra Modi’s Hindutva majoritarianism in India or Stephen Miller’s white nationalism in America. COVID-19 will infect both Hindu and Muslim as well as white and black alike. Trump’s tweets notwithstanding, the coronavirus doesn’t seem to know that it’s “Chinese.”

Unfortunately, neither the American imagination nor our institutions are configured with interrelatedness in mind. Americans are generous and caring in times of crisis as indicated by such measures as personal charitable giving. But among us, kindness takes only the form of private charity rather than the creation of just and efficient public institutions that can sustain us both in seasons of acute crisis and relative calm.

As Robert Reich recently observed, the US does not have a public healthcare system, functional or otherwise. The decimation of public health infrastructure and total reliance on private hospitals have left Americans in grave peril because we lack the capacity for the kind of robust testing regimen implemented by South Korea in short order.

If Americans wish to emerge from this crisis with wisdom and resilience, we will have to attune our imaginations to the truth of relatedness and away from toxic individualism. We are in this fix because national and interpersonal habits of thought and action have been shaped almost exclusively by market competition rather than mutual cooperation. We must curtail those destructive habits if human and non-human populations are to survive what is sure to be just the first of many shocks to come in an age of climate crisis. The only viable competition left remaining must be a race toward developing new and life-giving modes of planetary collaboration. As Pope Francis keeps insisting, the time for building walls is over; the time for building bridges has arrived. When we compete to build those bridges, we all win.

John J. Thatamanil is Associate Professor of Theology and World Religions at Union Theological Seminary. He is the author of The Immanent Divine: God, Creation, and the Human Predicament and the forthcoming book, Circling the Elephant: A Comparative Theology of Religious Diversity. He teaches courses on comparative theology, theologies of religions as well as a course on Gandhi and King. He is a past-President of the North American Paul Tillich Society and the founding chair of the American Academy of Religion’s Theological Education Committee. His Op-Eds have appeared in the Washington Post, the Los Angeles Times and a variety of sites online.

Counterpoint blogs may be reprinted with the following acknowledgement: “This article was published by Counterpoint Navigating Knowledge on 24 March 2020.”

Thank you so much, Dr.Thatamanil, for this beautiful write-up, which inspired me to reframe and resignify the act of embrace beyond the current “quaran-time.” You have wonderfully connected the Buddhist idea ” Patticcasammupada” with the Butterfly Effect. And I think this is very much in conversation with the “Systems View of Life”(Capra).