Sub/Urban Farming, Democracy, and the Environment 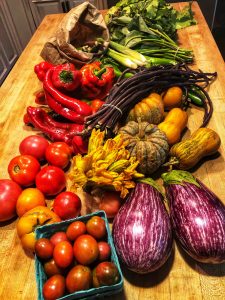 In the late 1990s, a few college students began a regenerative agriculture project that has now become a small farm on a college campus in a suburb of Los Angeles. They did not ask their college administration for permission to begin composting and planting on a piece of apparently unused land, rather they simply took over the space and began farming. Soon other students and members of the larger community joined them, and the farm became a space for growing and sharing food, conversation, and music, and for political organizing. When the administration discovered that a part of their campus had become “occupied” by this loosely organized group of farmers, they tried to shut the farm down. A “save the farm” movement fought back, and eventually the college incorporated the farm into one of their environmental studies programs.

In the last few decades, “guerilla gardening” or farming has expanded around the country and the world. In some cities, “guerrilla grafters” convert ornamental city street trees into fruit trees in order to address the dual problem of food insecurity and the environmentally destructive practices of industrial agriculture. A “Food Not Lawns” movement is expanding across the U.S. in order to address a multitude of problems ranging from toxic runoff into our ground water, loss of habitat for pollinators and other wildlife, food deserts, and the pollution resulting from transporting food large distances.

In Detroit, Brooklyn, and other cities, urban farms are addressing the problem of “urban blight,” often caused by decades of redlining, segregation, and governmental neglect. Urban farming can bring new jobs to impoverished areas which, in addition to building economic security, contributes to health improvement, crime reduction, and the creation of safe, healthy, outdoor spaces for children and families.

Similarly, the development of farm-to-school programs improves the diets and health of school children, while contributing to students’ understanding of where their food comes from and other important ecological issues. These programs are organized around small-scale, local, regenerative agriculture enterprises. In some cases, these programs provide jobs for disabled adults.

Some criminal justice activists are promoting community farming and gardening as a way to address the many problems that detained people face, from mental health crises to poor diets, and coping with isolation and the separation from loved ones. Several urban farm or street gardening projects focus on helping people transition out of prison or drug treatment programs, and they also assist at-risk youth.

A network of neighborhood-based farmers markets has expanded alongside the increasing number of urban “farmlets.” These markets support a community’s local and regenerative farm system, as well as local artisans who sell handmade baked goods and cheeses, soaps, plants, and other goods. In addition, these markets provide venues for food trucks, and may feature live music, or information tables on food waste recycling, composting, permaculture design, and food forests. They frequently serve as distribution points for CSAs (community supported agriculture).

First, the climate crisis is foremost on the minds of sub/urban farmers. Sub/urban farmers are typically quite knowledgeable about the contribution of industrial agriculture to global warming, as well as to soil erosion and the creation of dead zones. With each farmlet, sub/urban farmers aim to replace wasteful and polluting agriculture practices with regenerative ones, and to help their communities live more sustainably.

Second, sub/urban farmers are interested in establishing mutually beneficial connections with other people and with the non-human world. Today, the community garden or farmers market is a more ideal Habermasian public sphere than the café or popular media. These are the spaces or institutions where people in liberal democratic societies exchange information and ideas in a context not controlled by governmental or economic elites. At the farmlet or farmers market, we disengage from our screens and corporate-dominated social media that competes for our attention with sophisticated algorithms in order to sell us an idea or product, and we turn our attention to our neighbors and their creative endeavors. In the garden, we turn our attention to the dirt, insects, and plants that sustain life. And while we are at this, we hear alternative viewpoints and perspectives, and get outside of our information bubbles.

Third, sub/urban farmers are concerned about the political polarization of our societies and the resulting dysfunction in disaster preparedness, which will leave enormous numbers of people highly vulnerable as they face the challenges of sea level rise, water contamination, increased storm strength, desertification, and possibly mass migration due to environmental degradation and civil unrest. Some sub/urban farmers are preparing to live “off the grid” by generating their own food and energy, and collecting fresh water. Some are participating in what Marcuse called “the great refusal” by refusing to support (with their purchasing habits or work choices) environmentally irresponsible and destructive businesses and industries. Indeed, some sub/urban farmers take a “buy nothing” approach and participate in systems of bartering and recycling for clothing, services, food, equipment, labor, and so on.

Sub/urban farming, which may look to some like bourgeois escapism, is more subversive in its aims and methods than it initially appears. By challenging the wasteful practices of industrial agriculture, and promoting local, small-scale, sustainable food production, sub/urban farmers are demonstrating ways of living that resist the logic of capitalist markets. Their recycle, buy-nothing, and live-with-less philosophy challenges wasteful forms of consumerism. Some are experimenting with systems of personal exchange in which individuals “who have” give to those who don’t, through seed and plant swaps and neighborhood giveaways. This helps the latter meet their needs more independently of the exploitative gig-worker economy and without engaging in wasteful, polluting forms of commodity production.

Furthermore, sub/urban farmers are challenging our aesthetic ideals by “rewilding” our sub/urban spaces and preserving habitats for non-human creatures. They are also collapsing the urban/rural divide by bringing food production to cities, and communal living to rural areas. Given that the urban/rural divide maps fairly systematically onto deep cultural and political divisions, reimagining and connecting urban and rural spaces could be politically transformative.

Sub/urban farmers represent a diverse group in terms of their gender, ethnicity, age, religious affiliation, education level, nationality, and even political values. There are no publicly visible leaders or celebrities at the front of this grassroots, loosely organized, and decentralized social movement. Yet, without leadership or direction from the top, sub/urban farmers practice what Timothy Snyder calls “corporeal politics”: going outside and putting their “bodies in unfamiliar places with unfamiliar people.” On the farmlet, people make small talk and eye contact which can build bonds of trust among neighbors. Snyder argues that this leaves us less vulnerable to hate-mongering tyrants or mendacious fascists. In sum, sub/urban farmers are developing networks and organizations in order to empower people to grow healthy food, while protecting both the environment and democratic norms for future generations.

Laurie Shrage received her PhD in Philosophy from the University of California, San Diego (1983), and is Professor of Philosophy at Florida International University. She has published books and articles on various social movements, especially on reproductive health, decriminalizing contract sex, marriage equality, and racial justice.

This Counterpoint blog may be reprinted with the following acknowledgement: “This article was published by Counterpoint Navigating Knowledge on 2 March 2021.”