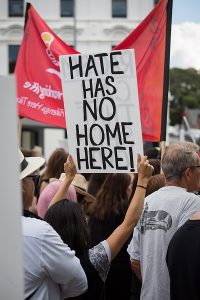 Kanye West likes Hitler. Now we know. We also know that hate speech flourishes when it is given free reign. If a thing can be said by celebrities or from high offices, surely it can be repeated elsewhere in public. The more often it’s said, the more acceptable it becomes and the more permissible it is to repeat. And so the cycle goes. Inundate public space with hate speech, and hate speech is normalized.

Free speech advocates insist that the appropriate counter to hate speech is not censorship but more speech. Comedian Jon Stewart, for example, responding to his friend Dave Chapelle’s SNL monologue, argues, “Penalizing somebody for having a thought, I don’t think is the way to change their minds or gain understanding. . . . This is a grown-ass man and to say, ‘We’re going to put you in a time out, you’re going to sit in a corner and stare at the wall until you no longer believe the Jews control the international banking system.’ We have to get past this in the country.”

To be sure, communication that counters hate speech is a powerful tool. It’s also important to any democracy, government in service of the people, that we are very careful that government not censor the voices of those people—especially when provocative ideas are aired. Such legal issues should be debated in the courts. But communities, including religious communities, have different obligations. They have to educate folks not only about the evils of hate speech but of the consequences of repeating it—of giving people and entire groups of people social permission to repeat it. Affording venues for and granting acceptability to noxious views may merely provide a release valve for hate speech, but it also may generate and reinforce those views where they did not previously exist.

Speech that demeans and degrades any human group is a violation of basic ethical and religious norms. Indeed, safeguarding the dignity and worth of all persons—regardless of religion, national origin, gender, and sexual orientation—must be a core commitment of any who believe that all persons are created by God and so possessed of sacred worth. Non-theistic traditions too can hold that harm to any of us will amount to harm for all of us as we are bound together in a single interconnected web of relations. It may be that government cannot censor hate speech, but communities can condemn it.

What brought this issue to my mind is the recent explosion of anti-Semitic speech and acts of violence against Jews. If the flame of anti-Semitism thrives on the oxygen of permissibility and repetition, ethical communities have obligations to choke off that supply; religious groups also have distinctively religious obligations. For them, speech that treats any human group as less than human and inferior is a lie and an affront to basic human dignity.

Donald Trump’s political career has opened wide the Pandora’s Box of hate speech. Public hate speech regarding Mexicans, immigrants of color (as opposed to those from Norway), Islamophobia, anti-Semitism, and a countless other malignities proceeded from his bully(ing) pulpit and have multiplied in public since his first presidential run.

Worse, the line between hate speech and hate-motivated action is blurry at best and easily crossed. The Brookings Institution reports,

Even more alarmingly, there is a clear correlation between Trump campaign events and incidents of prejudiced violence. FBI data show that since Trump’s election there has been an anomalous spike in hate crimes concentrated in counties where Trump won by larger margins. It was the second-largest uptick in hate crimes in the 25 years for which data are available, second only to the spike after September 11, 2001.

Recently, the proliferation of hate speech is being actively fostered in the name of free speech by Elon Musk and has found its brashest exponent in a disturbed and virulently anti-Semitic Kanye West.

It is precisely in this context that voices opposed to hate, especially religious voices, are most in need. Even in an age of diminished religious authority, religious communities can still wield and even regain moral power by contesting the tacit endorsement that their silence may seem to grant. When religious communities do not speak against spikes in hate speech, they give the impression that this issue does not matter as much to them as other issues, like abortion, where religious voices are routinely heard.

Christian communities like mine are especially obligated to speak out against hate speech—particularly against anti-Semitism—because the long history of Christian anti-Judaism and supercessionism provided the fertile soil for the Holocaust and other contemporary forms of anti-Semitism. Given our condemnable history, there is every reason to read silence as complicity—as the cliché goes.

Finally, when progressive religious voices counter both hate speech and its public repetition, they generate the possibility of allegiance with secular voices who also argue that hate speech must be curtailed. As Richard DelGado and Jean Stefancic write in their provocatively titled Must We Defend the Nazis? Why the First Amendment Should Not Protect Hate Speech and White Supremacy,

We believe that society should take more decisive measures to marginalize and discourage hate speech of all kinds than it has been doing. Moreover, we believe that this would be constitutionally and morally permissible and the right thing to do, even in the world of business and profits, such as the internet.

Religious communities may add that such restrictions are not just morally justifiable but religiously mandatory. To believe that every human being is made in the image of God is a distinctively theological reason to oppose hate speech. On both religious and secular grounds, we may argue that human flourishing requires the curtailment of speech that injures and maligns human dignity.

John Thatamanil is Professor of Theology and World Religions at Union Theological Seminary. He is also Priest and Volunteer Curate at the Anglican Church of St. John the Divine in Victoria, BC, and Theologian to the Diocese of Islands and Inlets. He is the author of Circling the Elephant: A Comparative Theology of Religious Diversity.

Counterpoint blogs may be reprinted with the following acknowledgement: “This article was published by Counterpoint Navigating Knowledge on 14 December 2022.”