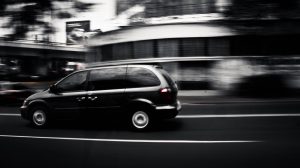 This time of year I observe the Christian season of Lent, traditionally a period of penitence and reflection. This year, I’m observing it as a season of interruption.

Lent begins each year with “Ash Wednesday,” a day when you might see Christians around with ashen crosses on their foreheads. This year my Ash Wednesday looked like many other days in my life as a professor and a mom of young children in the upper Midwest United States: I was rushing about in the minivan, trying to get family members dropped off on time. I had to get assignments posted online for my students on time, emails answered on time, and so forth.

At one point during this busy, not so penitential day, I was a passenger in the minivan for an hour stretch, allowing me to multitask and get reading done for class while zooming down the interstate. I was reading about the long and deadly history of Christian anti-Judaism and how it is fueled by the scripture passages and theologies that many Christians encounter in the season of Lent.

Meanwhile my spouse had flipped on a podcast as he drove; it was a This American Life episode covering the unofficial and unregulated refugee camps on the Mexico side of the US/Mexico border.

Vital narratives interrupted me from different angles, through the voices on the page and the voices of the podcast. On the page I read about how the history of Christian anti-Judaism continues in pernicious ways even where Christians openly repudiate anti-Semitism. Many Christians around the world will hear again this season in their churches the false and dangerous claim that Jewish people are to blame for the death of Jesus of Nazareth. This last year has seen a spike in antisemitic hate crimes in the US. The topic about which my students are reading is not, in other words, some old, abstract problem, but a current and concrete crisis.

The podcast filtered into my awareness as I read; I heard about how in a particular camp near the border there are only a few toilets for an enormous number of people, and so most people journey into the woods to relieve themselves. But, the woods are not safe for women especially because there are men waiting to attack them there.

A volunteer nurse was interviewed in the camp; she explains that one woman has asked for condoms so that she can ask her next attacker to use one. The nurse also explains that the rainwater from the woods is washing down into the camp and bringing the human waste with it to contaminate the camp itself. Everyone in the camp has some variety of gastro-intestinal ailment.

New Testament and Jewish Studies scholar Amy-Jill Levine writes in the conclusion to my students’ textbook that every Christian preacher speaking about the death of Jesus this Lent should imagine a row of Jewish children seated in the front row of their congregation. Would they preach in the same way? Or would their message be interrupted?

The podcast host mentions an “exodus.” I’m interrupted from my reading; is the podcast talking about the book in my lap, in reference to the Jewish story of the exodus—also a biblical story Christians read during Lent? No, I realize, the reference instead is to the large number of United States asylum officers leaving their jobs because of their moral disagreement with the work they are being asked to do on the U.S. side of the border in sending people back to the dangers they faced traveling through Mexico.

And there I am, rushing down the interstate in Minnesota. All in a day’s work I zip along. Without interruption I will close the book and turn off the podcast, and my emails and my appointments will fill my day as they do routinely every day. I am not regularly aware of the women who face sexual violence when they try to empty their bladders in a camp in Mexico, or of the Jewish schoolchild whose classroom buddy is taught at church to blame him.

That day, because it was Ash Wednesday, my tradition was handing me an interruption, and so I did stop and notice the absurdity of my rush in a world so torn. And I knew I wanted to stop or be stopped more often. How does a professor mom in a minivan listen to the global crises in our day?

I suspect I need ongoing rituals of interruption to keep me aware in some way of the systems of pain circulating around me. Surely this is part of why some religious observers stop for prayer throughout the day, whether the Benedictine Sisters of my local college or the Muslim residents of our Minnesota town. Practices of regular mediation, of weekly sabbath, or of pilgrimage all speak of interruption. That interruption is necessary in order to turn my attention to the shared “wicked problems” we face today. The interruption breaks the “pace of progress” of which Bauman, Bohannon, and O’Brien write in chapter one of their Environmental Ethics and Uncertainty: Wrestling with Wicked Problems. If my ordinary is “business as usual, the kinds of production that have degraded the world,” I look for interruption, for decision-making “not at the pace of progress but the pace of ambiguity.”

I’m looking for a ritualized exodus of thought, a way out of my ordinary rush. In that “ordinary” I can be so profoundly cut off from the cross-disciplinary and cross-cultural exchange that is necessary for problem solving in today’s world, while I can simultaneously and problematically seem so successful. I may be on time for my next appointment, and if I craft enough strong student assignments I may even be promoted, but what I need instead is an interruption—if, that is, I am ever going to listen to you, and we are going to find a way forward together.

Anna Mercedes is Associate Professor of Theology and Gender Studies at the College of Saint Benedict and Saint John’s University in central Minnesota, USA, where she also serves as pastor for Protestant students on campus as an ordained minister in the the Evangelical Lutheran Church in America. She is the author of Power For: Feminism and Christ’s Self-Giving and a co-administrator of the College of Saint Benedict’s Becoming Community grant initiative for transformative inclusion.

Counterpoint blogs may be reprinted with the following acknowledgement: “This article was published by Counterpoint Navigating Knowledge on 10 March 2020.”