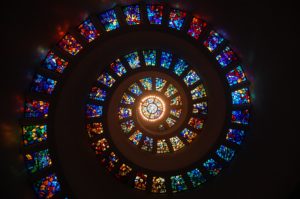 It could be said that social media is the most prevalent religion of our time. Like other faiths, it forms us, and we use it to form our world according to our desires, values, and beliefs.

New York Times bestselling author, Yuval Harari, writes in Sapiens that it is the human capacity for “fiction” that makes us different from other species. Simply stated, we are believers, and our beliefs shape our world. “You could never convince a monkey,” he says, “to give you a banana by promising him limitless bananas after death in monkey heaven.” Today, things that do not “really” exist, like Twitter, Facebook, borders, currencies, and political agreements are reshaping things that do exist, like weather patterns, species loss, and human freedoms.

In this sense, humanity remains deeply religious. We believe, often without question, in things that we cannot see. They shape our relationships and practices by shaping our emotions.

The American theologian James K. Smith notes that since the Reformation and Enlightenment, society has been shaped by the values and beliefs of theologians, philosophers, and social scientists—who erred in thinking that people are primarily rational beings. Descartes (ontological rationalism), Husserl (phenomenological rationalism), and Heidegger (perceptive rationalism) all had a hand in this. But if we were truly rational beings, we would never eat too much, waste the world’s finite resources, or binge-watch on a workday evening. Yet knowing that we do, we still buy into the myth of “rational” identity, where society works according to concepts, ideas, and “facts.”

In reality, much of how we live is pre-cognate, developed through our social and cultural imagination—things we can’t see that form us, including our traditional religions and the “religion” of social media. Oxford professor Graham Ward describes the cultural imagination as “the subconscious within which we move and from out of which we try to make sense, even cope, with all of our collective experience.” Cultural imagination emerges from our history and identity and then feeds back and re-shapes identity and history.

Social media are now a central part of how that happens. They both contribute to our socio-cultural imagination—our desires, aspirations, and emotions—and offer clear and telling insight about them. Social media change how we live and also “showcase” our lived experience. They reflect back to us, in the virtual world, how we make sense of our social life. This applies not only to our personal needs for friendship, belonging, recognition, and purpose. It also applies to larger social systems, such as how we shape our societies, develop shared group-identities, and come to adopt cultural norms. This is known as mediated identity formation.

For some scholars, the year of the Arab Spring (2011) marked a paradigm shift in social identity formation, especially for social movements. Organized and captured through social networking, protests were no longer limited by geography, language, class, religion, or gender. Shared identity was formed outside of traditional constraints. Wael Ghonim, administrator of the Facebook page, “We are all Khaled Said,” links the Egyptian people’s revolution to the ubiquity of social media and democratized mass communication. He says, “[t]his revolution started online, this revolution started on Facebook.” He continues, “if you want to liberate a society… if you want to have a free society…. This is Revolution 2.0. … Everyone is contributing to the content.” Such a paradigm shift is not surprising if we consider that approximately 55% of the human population had access to the internet at that time.

Not only do social media allow the bypassing of norms and societal gatekeepers, they allow for the creation of shared identity. The name “We are all Khaled Said” suggests an identity claim, “We are…” In Thomas Allmer’s words, the page served as a cognitive, communicative, cooperative platform, where people with similar views (cognitive) and outrage could communicate, be shaped (communicative), and be mobilized for action (cooperative) without the constraints of proximity, political affiliation, etc. Rich media captured more than the intellect; they stirred emotions around the world.

Such uses of social media are not only associated with bold activist causes. More recently, Cambridge Analytica employed manipulative social media strategies to influence the U.S. 2016 election. Similar strategies were employed to influence British views on immigration and swayed the vote for Brexit. In short, social media not only reflect but also shape our cultural imagination, the social identity and social values around which we construct our personal and public life.

Ward suggests that if we gain greater insight into the construction of our cultural imagination, we may find many new “possibilities for the way we live, or might live, act or might act, socially.” In other words, we are not merely unthinking participants in a powerful unseen system. Rather, he suggests, that critical reflective insight into our individual and social identity construction could transform our “politics, religion, economics and all the relations that bind and oppose us, one to another.”

Gaining insight into our cultural imagination includes the social media that help build it. Their influence could be likened to the social power exercised by religions in centuries past. As religions need mindful, socially aware critique, so do our technologies. The “unseen” bonds they create may be what Harari called fictions. But like many beliefs, they are powerful enough to start movements, remove and install political leaders, and change history.

Dion Forster is Professor of Ethics and Public Theology at Stellenbosch University. He is the author of numerous books and articles in theology and ethics. His research focusses on social ethics, economic ethics, and political ethics. Dion is the director of the Beyers Naudé Centre for Public Theology. See: http://www.twitter.com/digitaldion

Counterpoint blog posts may be reprinted with the following acknowledgement: “This article was published by Counterpoint: Navigating Knowledge on 05 Sept 2018.”