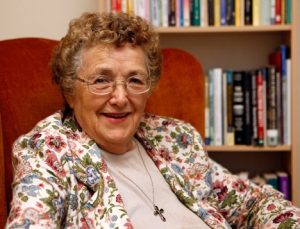 At a recent meeting of the American Academy of Religion, there was much sharing of memories about prominent scholars in religious studies who passed away in 2021 and 2022, including my mentor, Rosemary Radford Ruether. Ruether was an intersectional scholar and activist before “intersectional” even existed. From participating in Freedom Rides, and her first academic position at Howard University, to her first books addressing Sexism and God Talk, and her early books New Woman: New Earth and Gaia and God, Ruether has understood that the systems of anthropocentric, racist, ethnocentric, hetero-patriarchy will not be undone by addressing just one of its oppressive logics alone. They must be understood and deconstructed together.

As one of the lucky people in this world who have been privileged to study with her, I would like to offer some of the key highlights of how she has dealt with the twin phenomena that mark the 20th and 21st centuries: globalization (or more aptly described by Derrida as globalatinization) and climate change (or what I, following a modification of Amory Lovins, call climate weirding). These two phenomena affect different humans and earth others differently, depending upon one’s embodiment and specific location, but to be sure, no place or body is unaffected.

When I use the term globalization, I mean it in both an economic and a socio-cultural sense. It is the period since World War II that some sociologists refer to as “the great acceleration,” when fossil-fueled communication, transportation, and production technologies have sped up the daily lives of most “western” folk, and made the world much smaller. This has been an unequal process affecting people differently based upon class, race, gender, sex, sexuality, and geographical location. Ruether’s work on globalization and ecofeminism reveals her awareness of this process and the unequal distribution of goods and ills brought about by the globalization of neo-liberal capitalism and modern, western technologies.

In addition, the globalization of information and culture is not an even process. For example, I spend some time teaching in Jogjakarta, Indonesia, at the University of Gadja Mada. When I ask students there who the president of the United States is, they all know. When I ask my students in Miami who the president of Indonesia is, none of them know and in fact most could not point to Indonesia on a map. Western exceptionalism, gender and sex roles, and monotheistic values of western, Christian cultures have been imposed by the so-called “Modern West” upon the rest of the world. This is so-much the case that Derrida referred to the process as “globalatinization.” That is, globalization is not an equal process everywhere but the enforcing of western economics, cultures, and ideals over the face of the globe. Ruether has a deep understanding of this process and connects the contemporary process of American exceptionalism and domination to ancient patriarchal empires and earlier forms of European colonization. This uneven cultural exchange is paralleled by an unequal economic exchange with resources and benefits going to the wealthiest, while the ecological and social costs of global neoliberal capitalism are felt disproportionately by the poor. Colonization, Enlightenment, and Development in the name of “progress” should always face the question, “progress for whom and toward what end?” Ruether’s work in regards to racism, sexism, and anthropocentrism has been instrumental in sifting through the detritus of history to uncover the “dark” side of modernity and progress.

One of the consequences of fossil-fueled globalization is that we are literally living at a pace that is beyond the regenerative capacities of the planet. Climate change, and all that goes with it, is one of the negative consequences of pumping fossil fuels into the veins of humanity. Ruether’s work, from New Women, New Earth to Gaia and God among others, has addressed the problems of this fast-paced living, even when other theologians and scholars were not. Her understandings of the web of life and her relational ontology recognize that humans, as part of the rest of the natural world, cannot control and manage the rest of the natural world and that attempts to do so will end up causing problems. Instead, humans ought to work with and support the flourishing of the planetary community and all bodies therein.

In addition, Ruether recognizes that relationality also means vulnerability: something we are all very aware of as the climate changes and as pandemics spread across the globe. Furthermore, just as the effects of globalization are not distributed equally, she understands that climate activism alone won’t do the trick; rather, we need climate justice that pays attention to how poor women, children, and people of color around the world experience the ill effects of climate change more so than the wealthy (male) humans who contributed most to the problems of climate change. The unequal distribution of costs and benefits is, again, due to the underlying, systemic structures of racism, sexism, classism, and other disparities that persist in the modern world.

In conclusion, the ways in which Ruether deals with globalization and climate change in an intersectional and interrelated way, suggests that she had what I call a planetary environmental ethic. Such an ethic understands that humans are deeply embedded in evolutionary and ecological processes, and that we are first and foremost, citizens of the planet. From the perspective of a planetary ethic, the ideal and the material (god and gaia) exist on an immanent plane. Our ideas matter for the world around us, and the world gives birth to our ideas. However, relationality does not mean we are all the same. Different bodies experience the world differently based upon race, class, sex, gender, sexuality, and ability (among other identity markers) precisely because we co-construct worlds that favor certain ways of being and becoming over others. Ruether’s planetary ethic is a call to critically attune to the worlds in which we live, all of which make up the planetary at any given moment, in order that we might co-construct worlds that bring about more justice and more flourishing for the entire planetary community.

Note: This was previously published in the forward to a Festschrift for Ruether, Valuing Lives, Healing Earth.

Counterpoint blogs may be reprinted with the following acknowledgement: “This article was published by Counterpoint Navigating Knowledge on 1 December 2022.”