Religious Rituals and Scientific Laboratories: The Case of India 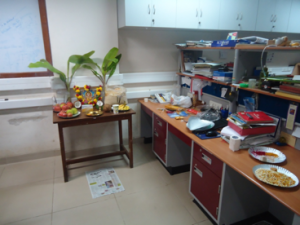 Science and Religion are often perceived as mutually exclusive, but historical and anthropological scholarship shows that there exist different forms of receptions. What is sometimes called the ‘conflict thesis of science and religion’ certainly has its limitations to understand the everyday life of ‘science and religion’ in many locations, including India.

Rituals and prayers are very much part of the public imagination of science in India. The Indian Space Research Organization (ISRO) is an interesting place to engage with questions of science and religion because of the religious nature of the technological work, and also because of the popularity of space science among the Indian public. The public comes to know about new innovations and missions of ISRO through news and media when the ISRO scientists visit a prominent Hindu temple to pray for the well-being of the space mission. Similar is the case of Ayudha Puja, where instruments are worshipped and get blessed by Brahmin priests in Indian scientific research institutions. Let’s have a closer look.

Space Science and Rituals: The Case of ISRO

The domain of science and technology is popularly close to notions of progress, development, and rationalism. However, scientists publicly perform puja and seek ‘divine’ help before launching satellites in India’s prestigious Indian Space Research Organization. This happens every time there is a new space mission in ISRO. In 2019, the space scientist and the current chairman of ISRO, Dr. K. Sivan, offered prayers at the famous Hindu temple in Tirupati on the occasion of the 50th mission of PSLV: The Polar Satellite Launch Vehicle (of ISRO). Former heads of ISRO have done this as well. It has become a norm now at ISRO before the launch of a satellite, and the image of the head of ISRO offering prayers to a Hindu deity today is an important image that people associate space science in India with. Leading Indian Newspapers cover this with much interest, and the images of the scientists and Brahmin priests doing the rituals together are a matter of discussion for a few days, and shared widely on social media platforms.

Though the worshipping of a Hindu deity with the help of a Brahmin priest is clearly inspired by the cultural domination of Hinduism in these institutions, it also invites us to think about the way science and technology is received differently in different places. Here, the cultural domination of the majority group is demonstrated through technology and science. Though these rituals are exclusively Hindu in nature, and very much in contradiction to the ethos of Indian secularism (as ISRO is a publicly funded government institution), it also invites us to think about the religious nature of technology itself, the way in which it is welcomed and practiced by the dominant groups.

Instruments, Rituals, and Laboratories: The Case of Ayudha Puja

In leading Indian scientific and technological research institutions, the scientists celebrate various Hindu festivals. The celebration of Ayudha Puja is the most noteworthy because many scientists participate in it. The Ayudha Puja (worshipping machines/instruments) is a visual treat in the plethora of decorative items that adorned the departments, office rooms, and the laboratories of the scientific research institutions. The technical staff generally initiates the celebrations, but the scientists actively participate in the puja, and heads of the departments give permission to conduct the prayers. Many Brahmin priests are seen on that day in the campuses for doing the puja. They visit various departments to perform the rituals and distribute Prasadam (sacred food that has been ritually offered to a god/deity) to participants. It is usually Brahmin priests or a mechanic or a staff member familiar with the prayers and rituals who perform the Ayudha Puja rituals in the presence of scientists and researchers. After the priest conducted the rituals, the workshops, which are part of the various departments, remain closed for two days, as it is considered inauspicious to touch the tools and machines during these two days. This was the case in the Indian Institute of Science, Bangalore, where I conducted ethnographic fieldwork. 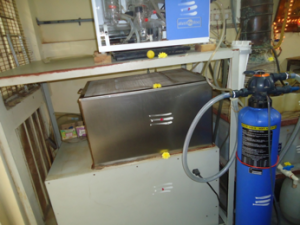 A decorated workshop after the puja, Department of Inorganic and Physical Chemistry, IISc. © Renny Thomas 2020

Some scientists celebrate the festival with their research students in their labs and distribute sweets to colleagues from other laboratories. A leading cell biologist told me that she celebrates Ayudha Puja regularly at her lab along with her research students. I have seen them decorating their lab and distributing sweets to researchers from neighboring labs on the day of Ayudha Puja. Special meals are served in the students’ mess (halls) on this day. All the departments, photocopying centers, canteens, cafes, library, and offices are decorated with banana leafs, flowers, color drawings, and sandalwood paste (chandan). During this day one finds decorated cars, bikes, and bicycles on the campus.

It is important to note that Ayudha Puja not only represents the culturing of technology; it also defines and legitimates certain traditions as cultural. This raises a larger question of how certain festivals such as Diwali, Holi, Ganesh Chathurti, and Ayudha Puja come to be celebrated as cultural, devoid of their religious content. One rarely finds such a consensus to celebrate or be a part of other festivals such as Christmas or Eid, which were conveniently relegated to the realm of ‘religion’. One can argue that the split between religion and culture acts as a strategic trope to normalize the majoritarian religious tradition, and these boundaries are constantly reworked.

From the two examples discussed above, it is clear that science, technology, and religion are part of complicated negotiations in different locations. The ‘conflict’ or ‘complementary’ models do not sufficiently reflect these negotiations. While we need to talk about how locations are important to understand the complex nature of science and religion, we also need to talk about how majoritarian cultures and religions shape and modify scientific cultures, and how this leads to the exclusion of other communities.

In order to understand how science works, it is important to understand the religious world of science, as aspects of religion are reflected in the way science is practiced. Though India is a nation of many religions, it is Hinduism that dominates when it comes to cultural practices in scientific and technological institutions. What we see is that science and technology help in reinforcing the domination of the majoritarian cultural beliefs and systems. Just as large parts of European science have their origin in Christian cultures, in India, the Hindu rituals and practices are seen as ‘Indian cultural practices,’ and in that process other communities and religions are ignored. Hence, we are confronted here with important questions about how science and technology are used for the promotion of the majoritarian religion and culture, which eventually can lead to cultural nationalism, in India just as in Europe and other cultural locations.

Renny Thomas teaches Sociology and Social Anthropology at Jesus and Mary College, University of Delhi, New Delhi, India. He was the Charles Wallace Fellow in Social Anthropology, Queen’s University Belfast, Northern Ireland, UK (2017–2018). He was also the recipient of a Collaborative International Research Grant from the American Academy of Religion, New York (2015–2016). He has published extensively on science and religion, science and social justice, and instruments and rituals. He is currently finalizing a book manuscript on science and religion in India. He is also working on an edited volume on scientific method.

Counterpoint blogs may be reprinted with the following acknowledgement: “This article was published by Counterpoint Navigating Knowledge on 1 September 2020.”

I hear sanskrit is the most computerable language and that NASA use it to program their satellites. Does ISRO also do the same?

Embracing the Magicality of Science – Counterpoint: Navigating Knowledge · September 22, 2020 at 11:41 AM

[…] few weeks ago, Renny Thomas argued on this blog that “rituals and prayers are very much part of the public imagination of science in India.” […]