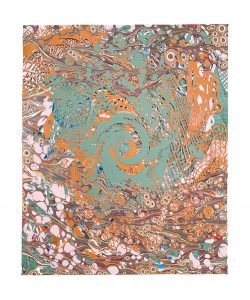 Talk of catastrophe has become ubiquitous in recent years. A global pandemic has harmed individuals, devastated communities, and upended established ways of life. But even as organizations around the world rush to address the Covid-19 crisis, climate catastrophes are raging. There are hurricanes of unprecedented intensity, droughts, floods and fires, as well as slower moving food shortages, water toxicity and species extinctions. Climate refugees have forced wealthier countries to contend with collateral issues of climate change beyond their borders. Even as different geographic regions envision the end of the pandemic (at starkly different speeds), few are expecting a full resolution of climate change any time soon. It seems likely that climate catastrophes—the effects of which are exacerbated by and exacerbate social inequality—will continue to transform the worlds in which we live. What then is the role of the study of religion in the times of climate catastrophe?

Reflecting on the contributions of the study of religion to a deeper understanding of the challenges of climate change requires that we look back at the histories that shape the cultures, religious traditions, and practices we (religion scholars) study. Which histories of catastrophe are told and which are quickly forgotten? For some communities, catastrophes produced by colonialism and slavery are an inherent part of the histories that still shape their lives. For many, today’s environmental catastrophes are, in Elizabeth Povinelli words, “ancestral catastrophes” (p. 2–3). Addressing the deepest dimensions of environmental catastrophe thus requires exploring also the legacies of socio-material histories in our present moment. We need to explore the ways in which histories of colonialism, slavery, nationalism, and migration have shaped the environment of particular places—and be attentive to the ways in which proposed solutions to climate change follow the extractive paths carved by colonialism and expanded by global capitalism. Along with the socio-material analyses, the study of religion has much to contribute to the examination of contemporary narratives and visions, being attentive to how predominant visions of climate catastrophes can perpetuate the occlusion of other histories and visions, paving the way for the unequal distribution of environmental damage and resources for repair.

Rather than collapsing humanity into a totality, responding to climate change and environmental catastrophe requires deep analyses of diverse ways of being in the world. How have particular communities understood their relationship with and responsibility toward the environments in which they live? How have different religious traditions responded to—dismissed, justified, or confronted—environmental degradation? What distinct resources have specific religious traditions or communities developed to denounce or adapt to environmental changes in their communities? How are climate catastrophes changing religious traditions or even sparking the development of new ones? How does the present situation test traditional visions of a collective future? Such questions would allow us to grapple with Arturo Escobar’s suggestion, “If worlds are multiple, then the possible must also be multiple” (ix).

These questions are part of the 2022 American Academy of Religion’s presidential theme, in which it is inviting its members to reflect on the contributions of the study of religion, actual and potential, to addressing climate change. If you haven’t heard of it, the American Academy of Religion is one of the oldest and largest scholarly organizations with international membership devoted to promoting the academic study of religion. Each year, between 8,000–9,000 scholars from around the world meet to discuss important topics across the field of religious studies. The president of the society each year (it shifts on an annual basis) chooses a theme for the meeting to help focus the content of the meeting. In 2021 Marla Frederick’s presidential theme, “Religion, Poverty and Inequality: Contemplating our Collective Futures,” invited scholars to think about the “human implications of religion in a world upended.” This sets up this year’s theme, thinking about environmental justice in the times of climate catastrophe, not as an isolated concern, but rather as woven through the fabric of our society. At this year’s meeting in November 2022, we are hoping for interrogation across disciplines, fields, and subfields of the role of the study of religion in analyzing, historicizing, and envisioning alternative ways of life in the context of climate change catastrophe. If you are interested in joining the conversation, more information can be found on the AAR’s website.

Mayra Rivera is Andrew W. Mellon Professor of Religion and Latinx Studies at Harvard University. She is the current president of the American Academy of Religion. Rivera works at the intersections between philosophy of religion, literature, and theories of coloniality, race and gender—with particular attention to Caribbean thought. Her most recent book, Poetics of the Flesh (2015), analyzes theological, philosophical, and political descriptions of “flesh” as metaphors for understanding how social discourses materialize in human bodies. She is also author of The Touch of Transcendence (2007) and editor of Planetary Loves: Spivak, Postcoloniality, and Theology (2010) and of Postcolonial Theologies: Divinity and Empire (2004).  Rivera is currently working on a project that explores the relationships between coloniality and climate change through Caribbean thought.

Counterpoint blogs may be reprinted with the following acknowledgement: “This article was published by Counterpoint Navigating Knowledge on 2 February 2022.”