Preserving Religious Freedom When (Some) Churches Abuse their Members? 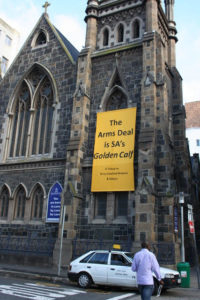 Religion plays a significant role in the lives of most South Africans. In the last census (2011), just over 84 percent of citizens said they are Christian while a Pew-report from the same period found that 74 percent of South Africans say that religion plays an important role in their daily lives. Churches and religious leaders enjoy higher levels of trust than either the government or private sector.

Some suggest this is because of governmental moral and political failures. People feel they cannot trust corrupt politicians to look out for their best interests. Other researchers argue that religious leaders and institutions gain trust in situations where citizens face high levels of economic and social vulnerability, as is the daily reality for many South Africans. Religious groups are often the only sources of basic care and hope in the midst of great need and vulnerability.

However, this is where we encounter a dilemma. While South Africans are deeply religious and trust religious leaders and institutions more than the government, there is also evidence that some persons face abuse at the hands of religious leaders and communities. In some of the more visible cases, Pastor Timothy Omotoso is alleged to be involved in sex trafficking of female congregants. Numerous persons were killed and various other crimes were committed in the Seven Angels cult massacre. The self-appointed “Prophet” Lethebo Rabalogo sprayed a deadly insecticide on parishioners as part of a “healing” ceremony. While these incidents are not representative of the actions of the majority of South Africa’s religious communities and leaders, they are serious.

As a result of public outcry, the state has proposed new regulations on religious leaders and communities, including requiring leaders to hold graduate qualifications in theology or religious studies to lead religious communities and requiring registration and state approval of religious communities before they can operate. These initiatives began in January 2017 under the auspices of the “hate crimes” and “hate speech” bills. The state claims that it has a right to curtail religious freedoms, determining which forms of religion and religious communities are legitimate since they have a responsibility to safeguard the safety and human rights of South Africans.

However, various civil society organizations have raised concerns about the government’s approach. Allowing the state to determine the legitimacy of religious leaders and communities limits religious freedom with results that are potentially dangerous to democracy. Under apartheid, for instance, the South African government used “protect-the-people” reasoning to try to silence religious communities working against its human rights abuses. They called the situation a “state of exception,” where the state can remove or curtail rights– including the right to practice one’s faith–in order to secure important state interests.

For example, between February and April, 1988, religious leaders mostly from mainline Christian Churches protested against the government’s clampdown on political opponents. When the government shut down anti-apartheid protests as part of the “State of Emergency,” it wrote to Archbishop Desmond Tutu: “You are no doubt aware that the expressed intention of the planned revolution by the ANC/SACP alliance is to ultimately transform South Africa into an atheistic Marxist state, where freedom of faith and worship will surely be among the first casualties.” The government argued that, to protect its citizens, it had to shut down the activities of those faith communities that it regarded as illegitimate.

Robert Vosloo (professor, University of Stellenbosch) comments that the, “notion of freedom of faith and worship [was] invoked to challenge the legitimacy of the churches’ participation in the struggle for liberation.” The state seemed to be setting up a conflict between “legitimate” religion and religion that it judged to be harmful to the interests of its citizens and the objectives of the state. In short, the pretext of “protecting the citizenry” was used to curtail citizen rights.

Of course, the Nationalist Apartheid government and the democratically elected African National Congress are very different. However, because of the current state of distrust in the government, there is significant suspicion when the state uses selected, uncommon abuses by religious leaders and communities to curtail religious freedoms—especially as they have historically held the government accountable for its actions. This remains the case today. For example, the South African Council of Churches played an important role in exposing corruption in the Jacob Zuma administration and working for his resignation. The government and governing African National Congress party reacted strongly and negatively and would gladly find ways to exercise restrictive power over critical religious leaders and communities.

Hence the dilemma: how do we balance the need to protect people from abuses by selected religious leaders and communities while allowing religious communities to function freely?

It seems to me that the abuses found in the few highly publicized cases do not call for the broad limits on religious freedom that the state is trying to impose through its use of the “hate crimes” and “hate speech” laws. The state already has the right, through criminal law, to prosecute any person or institution that harms, or seeks to harm, another person.

Of course, the churches and religious leaders bear responsibilities for greater reflection, action, and cooperation to avoid abusive conduct and law-breaking. This could include, among others: the establishment of best practice models; policies and procedures protecting the safety of members and adherents to religious communities; clear internal processes for lodging grievances against a leader or community; disciplinary consequences for transgressing persons and policies; mutual cooperation between religious groups and the state; and the training and monitoring of religious leaders and religious communities. The various ecumenical structures, such as the South African Council of Churches and the Religious Leaders Forum, could play a significant role in working with member institutions, and the state, to ensure that they develop and subscribe to such policies and practices.

In sum, the state and religious bodies each have a role in protecting safety while preserving religious freedom. The state should enforce existing criminal law while religious bodies must ensure that their leaders and communities deserve the trust that the South African public places in them.

Dion Forster is Professor of Ethics and Public Theology at Stellenbosch University. He is the author of numerous books and articles in theology and ethics. His research focusses on social ethics, economic ethics, and political ethics. Dion is the director of the Beyers Naudé Centre for Public Theology. See: http://www.twitter.com/digitaldion.

This Counterpoint blog post may be reprinted with the following acknowledgement: “This article was published by Counterpoint: Navigating Knowledge  on 05 December 2018.”

Religion and state need to be in balance to protect democracy in South Africa - MambaOnline - Gay South Africa online · July 21, 2022 at 6:27 PM

[…] the law is often complicated. It is sometimes even conflicted. At the heart of the matter lies the tension between freedom of belief and association, and protection from […]