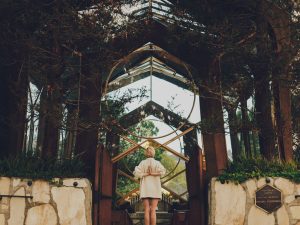 In many ways the nineteenth and twentieth centuries were marked by a slow slide in western modern thought from transcendent ideals to immanent, relational realities. The universal truths, transcendent ideals of beauty, and moral ideals of ultimate good and evil began to break under the pressure of an increasingly globalized world and new understandings of the natural world that were in no small part influenced by “eastern,” relational ways of thinking. In other words, through the development of technologies of transportation and communication more people were able to travel around and read about different places and cultures. From a western, colonial perspective this meant more and more people were coming into contact with “eastern” ways of thinking and with various indigenous understandings of the world. These encounters provided more relational and immanent understandings of human beings and all things human: including ideas, knowledge, values, and morals. In other words, “getting to know” from these more relational and immanent perspectives was much more about engaging with multiple perspectives, places, things, and phenomena “on the ground,” rather than seeking transcendent universal principles that were “out of this world.”

Two of the major shifts in what we think of as modern, western science occurred in those fields of study western science identifies as evolution and cosmology. Again, both were influenced by the influx of eastern and immanent ways of thinking, especially during the period of European Romanticism. More attention to the data provided by examining nature more closely (through stronger microscopes and telescopes) helped evolutionary theorists and cosmologists shift away from what might be called a metaphysics of separation and stasis (everything is created as it is, in a steady state, from the beginning) toward that of a metaphysic of relation and change. This meant paying closer and closer attention to how organisms and entities interact and change through time. Out of this closer examination western science began to understand existence as a series of relationships and exchanges that began, cosmically, 13.7 billion years ago with an initial expansion event, and, geologically on this planet, 4.5 billion years ago in a process of evolution. Nineteenth-century European intellectuals with these emerging immanent and relational understandings of reality began to think about the arts, natural sciences, and human sciences (including religion/theology) as emergent from this process as well. The process of “making immanent” all things human would eventually lead to a series of crises for the western modern mind, that many now think of under the rubric of “postmodernism.”

This is not so much a blog entry about postmodernism as it is a way to begin thinking with the rest of the planetary community in an immanent way: something that has been done in most human cultures that have been recorded (including in non-dominant western sub-cultures), but which is a kind of “return” to materiality for the modern western mind. The controversial nineteenth-century Romantic scientist Ernst Haeckel was one such intellectual trying to rethink humans and all things human (culture, language, religion, technology) from within an immanent framework. He also wanted evolution to be the basis for a new religion in which the old Greek Trinity of Goodness, Beauty, and Truth were rethought from within an immanent frame. For the rest of this short blog entry, I think with and beyond Haeckel and these other Romantics to what truth, beauty, and goodness might look like from within a planetary perspective.

If truth from a transcendent perspective is “far away” and “above the fray,” then truth from this immanent, relational, planetary perspective is up close and embodied. Co-creating knowledge together is about listening to the multiple perspectives of/on a given situation, place, event, or thing (human and nonhuman) and then making sense out of the situation at hand. This is a building of “common sense” among humans, plants, animals, entities, and events. However, we must also realize that as embodied creatures who are part of this pluriform process of becoming, the planetary community also makes sense for us. That is, most of what “makes sense” is due to the geo-evolutionary history around us that creates our bodies, oxygen, gravity, etc., and which we were/are created by. We need multiple and critical perspectives to help us understand the multiple truths of our world(s) at any one given moment of planetary becoming. This is where some notion of justice or planetary goodness is required.

Goodness as Attunement to the Flourishing of Bodies

Whereas truth from a transcendent perspective is mostly about metaphysics and ontology, truth from this immanent, relational, planetary perspective is more about ethics (goodness) and aesthetics (beauty). In other words, truths are as good and beautiful as they promote the flourishing of multiple planetary bodies. From a critical perspective no one system of truth and knowledge will support all bodies in perpetuity: reality is constantly changing, in flux, and on the move. Thus, we need constant amendments from multiple earth bodies: deep attention to the injustice caused by certain ways of understanding and thinking about reality vs. others. We need what Rob Nixon might call “cartographies of violence”: constant attuning to the bodies that are harmed by a given truth, idea, value, and knowledge system, and then a re-attuning to those bodies in ways that help us to cause less violence and promote more flourishing. All of this must be done, of course, with the realization that all “common grounds” depend upon an “under commons.” There is always bad mixed in with the good. There is always a definition of ugliness on which beauty depends.

Beauty as Resonating With

Rather than there being universal, eternal, and unchanging concepts of beauty, from within a planetary perspective beauty is evolving and relational. It might be understood as resonating with: that feeling when the hairs on your arms stand up from an “aha” moment, or from the sound of a symphony or choir, or from watching a sunset, or hearing/reading a beautiful poem. This doesn’t mean that all entities will resonate with the same experiences: and that is ok. Beauty is multiple in form. We are varied enough to warrant different ideas/feelings of the beautiful. We should always pay deep attention to our understandings of beauty (beauty for whom and on what it depends). Some forms of beauty depend upon such violence that they may not be worth promoting: think about understandings of beauty that lead to body dysmorphia, or the adornment of beautiful things that depend upon the violent extraction of resources from earth, water, plants, and animals. We should promote those forms of beauty that lead to flourishing (goodness), and amend those that create so much ugliness they are destructive to the planetary community or members therein.

Counterpoint blogs may be reprinted with the following acknowledgement: “This article was published by Counterpoint Navigating Knowledge on 26 January 2022.”