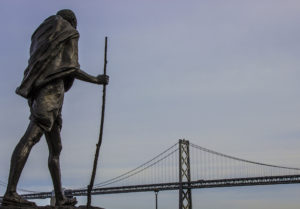 Can we find certain convictions abhorrent without abhorring those who subscribe to them? Put crudely, can we refuse to hate the haters? If it is possible, is it also obligatory? If Mohandas Gandhi and Martin Luther King are to be believed, the answer is an emphatic yes. Figuring out how to fulfill this spiritual obligation is imperative in this moment of intractable political conflict in many areas of the world, including where I make my home, the U.S.—not because we seek to be nice or to refuse conflict but in order to fight well.

The debate over the confirmation of Brett Kavanaugh to the U.S. Supreme Court has made these questions not only harder to answer in the U.S. but more difficult to pose. Such questions elicit the suspicion that the questioner intends to venture into the pabulum of well-intentioned civility discourse. And to avoid the pabulum, the reaction against civility per se has become severe. It implies, for many, troubling equivalencies across partisan divides and a refusal to engage in necessary conflict.

Just recently, on Oct. 9, Secretary Hillary Clinton asserted that civility, at least for the moment, is impossible when it comes to Republicans. To CNN’s Christiane Amanpour, Clinton stated, “You cannot be civil with a political party that wants to destroy what you stand for, what you care about…. That’s why I believe, if we are fortunate enough to win back the House and or the Senate, that’s when civility can start again.” Clinton’s cry is civility later, but not now!

The central question before us is: Can we resist the temptation to demean those who demean others?  Can we resist and politically oppose our enemies without becoming them?

The difficulty of this task must not be underestimated. Consider the way many were triggered, quite understandably, to near fury by President Trump’s repellant parody of Dr. Christine Blasey Ford at his October 2nd rally in Southaven, Mississippi. His shameless caricature of a survivor of sexual assault together with the enthusiastic response from his audience constitute a frontal attack on human decency. Trump’s actions no longer surprise, but watching men and even women gleefully applaud his mockery generated among many a visceral, automatic reaction of disgust.

Within disgust, danger lurks. It is the danger to which Secretary Clinton arguably fell prey during the 2016 election season. She rather infamously characterized half of Trump supporters as a “basket of deplorables.” She may have meant that certain of their actions are deplorable, but the language suggests that these persons were deplorable in toto. It risks dehumanizing those who dehumanize. Spontaneous reactions of disgust may be unavoidable, but directing that disgust toward other human beings is not.

Those who hold to religiously or spiritually inspired convictions about the inherent dignity and inviolability of all human beings strive to resist such totalizing disregard. Such convictions form the beating heart of nonviolence theory and practice. Ironically, Gandhi, whose 149th birthday was commemorated on the very day of Trump’s Southaven rally, insisted on this point. Yet he had no interest in making nice nor was he in doubt about the righteousness of his cause against British colonialism.

The impulse to honor, even reverence, one’s enemy is not motivated by moral uncertainty. Citing the resoluteness of the Buddha and the Christ who “drove out the money-changers from the temple of Jerusalem,” Gandhi wrote, “Both were for intensely direct action. But even as Buddha and Christ chastised, they showed unmistakable gentleness and love behind every act of theirs. They would not raise a finger against their enemies, but would gladly surrender themselves for the truth for which they lived.”

Nonviolence emerges from a set of spiritual disciplines that prevent those who practice them from becoming like their disparaging enemies, even if inadvertently. While the wellbeing and redemption of the enemy remain the primary goal of nonviolent resistance, it is also an exercise in soul-craft, spiritual self-care within a toxic environment. It is the studied commitment to honoring the dignity of both the enemy and of oneself in equal measure. The nonviolent resister knows: If I am to preserve my own dignity, I must be prepared to defend my enemy’s especially when my enemy denies mine. Only then can I fight by means other than those my enemy deploys.

Trump seeks to mock, distract, and enrage his opponents because his style of politics hinges upon grievance and polarization. Generating an unbreachable wall between “a righteous us” and “a wicked them” is essential to his project. That boundary becomes impassible when both parties take the bait and believe that the other is no longer human. While it is easy to see that Trump degrades himself when he degrades others, it requires keener vision to recognize the same processes at work in those who are disgusted by Trump and his followers. Nonviolent resisters may loathe certain deeds but never the doer.

If we come to believe that Trump’s acolytes are no longer human, we deny their infinite sacred worth. In so doing, we not only diminish what we expect from Trump supporters, our political opponents in general, but also from ourselves. When we say, “What else can we expect from Trump supporters?” we lower the setting on the national moral thermostat. We accede to the “lock her up” chants against Clinton and Senator Diane Feinstein (Democrat, California) during the 2016 election campaign, to attacks on journalists, and to a thousand other barbarous behaviors as the new normal. We expect little from them, and we soon find that we expect little from ourselves when it comes to how we resist our enemies. Anything goes.

This mutual debasement is a corrosion that plays into Trump’s hands. Should we demean or even demonize our opponents as they do unto us, inevitably, expectations for a politics of decency, integrity, and mutual respect—things Trump’s opponents should want—go out the window. The alternative is not that we “play nice.” What we need is a style of vigorous conflict that refuses to degrade the other. Robust conflict, well conducted, requires honoring the other and in so doing honoring ourselves.

As Martin Luther King so eloquently put it, “God is interested in the freedom of the whole human race and in the creation of a society where all men [sic] can live together as brothers, where every man will respect the dignity and worth of human personality.” If that is the moral goal we seek, then, as King advises, we must employ moral means. We must learn to fight well if what we are fighting for is the wellbeing of all, enemies included.

This Counterpoint blog may be reprinted with the following acknowledgement: “This article was published by Counterpoint Navigating Knowledge on 17 October 2018.”