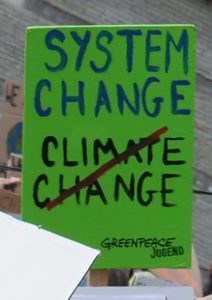 Earlier this November, thousands of people—country leaders and activists, climate experts and NGOs—traveled to Glasgow for COP26, the 26th annual UN global Climate Summit. As world leaders were debating inside and negotiating an agreement that many criticized as, to put it mildly, “too little, too late,” the streets outside filled with protesters. In the pouring rain, they demanded not just “net zero” but something much larger: an overhaul of an entire system they deem fundamentally destructive and unjust.

In a 2015 conversation with Black studies scholar Katherine McKittrick, Caribbean cultural critic and theorist Sylvia Wynter advocated the same. “If we continue with our old way of thinking,” Wynter conveys, “we drift as a species toward an unparalleled catastrophe.” She also identifies its precise nature: “global warming, climate instability, and ecosystemic catastrophe.”

For Wynter, this catastrophe is partly onto-epistemological. Wynter is widely read by activists and scholars working with and in Black studies, Caribbean studies, literary theory, and post- and decolonial theory—and, increasingly also in philosophy, theology, and religious studies—for her wide-ranging analysis of the way that race has shaped our thinking about being human. Beginning with her 1984 essay “The Ceremony Must be Found: After Humanism,” Wynter has been on a quest to demonstrate the exclusionary nature of the supposedly universal category “human.” Her argument is complex and expansive; here, I will simply note that Wynter shows that since the symbolic year of 1492 racialized peoples have been relegated to the realm of “not-quite-human” or “abject humanity” (Zakiyyah Jackson’s term) because “Man,” currently embodied by the white bourgeoisie, “overrepresents” itself as the only way of being human.

For Wynter, the “unparalleled catastrophe” that we face today is grounded precisely in this false but persistent idea that “Man” is the only way of being human, which also had as effect that everyone is “programmed” to be, act, and feel in “His” ways. In practice, this has meant, among other things, a globalization of free market capitalism and then neoliberalism which, as the climate protesters in Glasgow also noted, has had immensely destructive implications for people of color and the Earth.

The system that these protestors demand to be changed, in other words, is grounded in, revolves around, and reinforces the “wellbeing of Man”—to the detriment of those who cannot or will not or are not allowed to follow in His footsteps. Of course, Wynter is attuned to the manifold ways in which Man is and has been resisted; what she offers is a broad, structural analysis of race and hegemony after 1492.

While identifying this link between ecological destruction, capitalism, and race is not necessarily new and indeed, as Glasgow also demonstrated, is voiced both within and outside the ivory tower, Wynter’s analysis goes further than most in that she attempts to locate the roots of such linkage. According to her, we find its locus in something she calls “the phenomenon of religion.”

Wynter’s writings on religion are somewhat ambiguous because she frequently uses the term, though never defines it. However, I argue that for Wynter the “phenomenon of religion” names a particular social function, a wrestling with the who, what, why, and where of human existence.

I argue, too, that this wrestling takes on a particular form. Indeed, what makes religion religion, for Wynter, is that such thinking about existential and ontological questions involves a particular structure, which I call the grammar of distinction and displacement. Religion produces a set of interlinked distinctions—between spirit and flesh, earthly and celestial, rational and irrational, human and nonhuman, animate and inanimate. What’s important here is that such distinctions are not neutral: one part of the unified pairing is seen as good, holy, order, life—the other as bad, profane, chaos, death. Wynter demonstrates, too, that such distinctions are attributed to what she calls “extrahuman agents of determination.” This means that such distinctions are considered the work of God(s) or Nature, and therefore seen as fixed, eternal, and/or natural. This is what I mean when I use the shorthand of displacement: human agency and invention is assigned to extrahuman agents.

Importantly, for Wynter, we find this grammar not only in theological reflections about what it means to be human; we find it, too, in such seemingly “secular” realms as Renaissance humanism, or even modern science. This grammar of distinction and displacement becomes particularly problematic, moreover, when we consider that such seemingly fixed, natural, and eternal distinctions are used, in turn, to hierarchically differentiate between groups of people. As Émile Durkheim already told us in the early twentieth century, religion is ultimately about community formation and cohesion—and thus, and this is precisely what Wynter calls our attention to, also exclusion.

To avoid the “global catastrophe for our species,” Wynter advocates an onto-epistemological overhaul: in a nutshell, we must acknowledge and take responsibility for the fact that we invent the categories and distinctions that we live in and by, such that we can diversify them, change them, and replace them with concepts and boundaries less rigid, pure, and absolute.

Artists and writers who intervene in the grammar of religion—who disrupt, challenge, and go beyond distinction and displacement—can also help us get there. Over the past years, I’ve been thinking, specifically, with the work of contemporary Afrodiasporic writers such as M. NourbeSe Philip and Fred D’Aguiar, with artists like Ellen Gallagher, Kara Walker, and Christopher Cozier, and musicians like Drexciya. Each of them, in their own way, challenge hierarchical, racialized systems of domination. They wrestle with ontological and existential questions but do so by inhabiting and breaking certain well-worn and worn-out categorical distinctions—in particular, distinctions that have been foundational to “Man,” such as that between human and nonhuman, animate and inanimate, rational and irrational. They ponder, in fact, the possibility of entanglement, relationality, symbiosis, and more-than-human agency (not to be mixed up with the “extrahuman agency” I referred to above). In doing so, they demonstrate, too, that such categorical distinctions are not fixed, eternal, transcendent, and natural, but human-made, porous, fictious.

To name and theorize the destabilizing nature of these works, my dissertation and current book project establishes and develops the concept of parareligious stories and a theory of parareligion. The prefix “para” here indicates that these works both distort and exceed the grammar of religion (and in doing so it diverges from Jonathan Benthall’s and Pete Ward’s iterations of the term parareligion, which mostly home in on “religious parallels”).

Thinking about parareligion as distortion and excess is useful and necessary because it produces a critique of the racist and colonial continuities from “theological” and “secular” discourses through which ideas about being human developed. It also demonstrates that “religion,” when it desires pure categories and distinctions, always fails. After all, precisely the constant need for absolute separation demonstrates permeability, porosity, or entanglement.

We may think of parareligion, then, as deferring “religion’s” narratives of hegemony and conditioning the possibility of an “otherwise.” Perhaps more importantly, the term identifies and names the existence of such alternative stories and modes of being and living. Of course, the protestors that met in Glasgow earlier this month were not the first to voice a systemic critique and demand change. Whether implicitly or explicitly, they build on centuries of interventions—intellectual, cultural, and social—of many who were constitutive of yet excluded from the realm of what Wynter called “Man.” The concept of parareligious stories and the theory of parareligion offer us a way to think about some of these interventions and name their disruptive, creative nature.

Dr. Justine M. Bakker is Assistant Professor in Comparative Religious Studies at Radboud University Nijmegen and postdoctoral researcher at KU Leuven (funded by Fonds Wetenschappelijk Onderzoek). Parareligion is the central theme and theory of her dissertation (defended in May 2020 at Rice University, with portions of it presented at earlier stages), which in turn forms the basis of her current book project, Demonic Ocean: Parareligion in the African Diaspora. Together with David Kline, she is currently editing a volume on Sylvia Wynter and religion, which is under contract with Fordham University Press.

Counterpoint blogs may be reprinted with the following acknowledgement: “This article was published by Counterpoint Navigating Knowledge on 23 November 2021.”

Is your dissertation published or available online? I am very interested in this line of critique – it chimes with my own work. You might be interested in Playing the Scene of Religion: Beauvoir and Faith (Equinox, 2021) – where I present a theoretical scaffold for thinking “religion” as it currently iterates in capitalism, the contemporary scene of religion.

Karen, apologies, only seeing this now–thanks for the response, I’ll send you an email!

[…] [20] Wynter and McKittrick, “Unparalleled Catastrophe for Our Species”, 27. I develop this argument in my contribution to Words Made Flesh: Sylvia Wynter and Religion, a volume I am co-editing with David Kline that is currently under contract with Fordham University Press. See also: Justine Bakker, “COP26 and the Need for Parareligion”, Counterpoint: Navigating Knowledge, 23 November 2021. https://www.counterpointknowledge.org/on-cop26-and-the-need-for-parareligion/. […]