Immediacy and the End of Modernity’s Ends 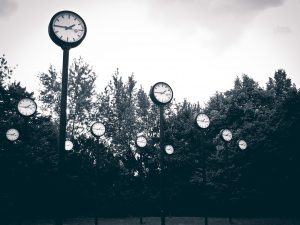 Several recent blog posts have touched on the meanings of end times and apocalypses. One in particular hoped for an apocalypse, in the sense of a new world being uncovered. I want to add to this discussion of the end times in a different way. Perhaps one thing we’re uncovering in our excavations of the apocalypse is the faults in our End-thinking—and by “End,” I mean goal-oriented. What if the Ends that ground Modern western thinking are accelerating the certain end of the fossil-fueled Modern world?

At least since the Great Acceleration that followed WWII, the Modern world has increasingly brought the entire planet under the tyranny of chronological time and attempted to project and perpetuate Modernity’s goals into the future of the entire planetary community. Many of these goals are quite lofty and admirable, so this post is not a blanket critique of everything Modernity has given to many humans. But it is a critique of particular out-of-this-world, fossil-fueled hopes and dreams that outstrip the planetary community’s regenerative capacities. It is a critique of Modernity’s goal of greater material wealth for a few over the flourishing of the many (human and non). It’s also a critique of the ways in which Modernity’s material goals have always been based on injustice (slavery, racism, classism, and genocide) and the use of the rest of the natural world as mere means toward Modern Ends.

Is it possible for 7.6 billion people to live out the fossil-fueled dreams of Modernity and still leave space for any other life on the planet? Are these End goals realistic? Climate change, mass economic inequity, and zoonotic pandemics might suggest the answer is a resounding, “No.” Maybe the current pandemic can give us the time we need to slow down and re-evaluate Modernity’s Ends. Maybe it will even allow us to take a break from End-oriented thinking and pay more attention to the immediacy of life. By “immediacy,” I don’t mean ignoring the future, or that any experience of life is unmediated. I mean something like Donna Haraway’s admonishment to “stay with the trouble,” to pay attention to the life bubbling up in our everyday experiences—both when it’s pleasant, and when it’s unpleasant.

Paying attention to immediacy doesn’t entail throwing off ethics and values; instead, it involves paying deep attention to how our collective Ends—or at least the collective Ends that have become the dominant drive behind Modernity’s expansion—are affecting different planetary bodies in different ways. For instance, I don’t think it’s a coincidence that the recent global attention to and success of the Black Lives Matter movement comes during a time of pandemic. Many (though surely not all) have experienced some kind of time shift (let’s call it pandemic time) that has jolted us out of the usual grind of fossil-fueled Modernity. Many of us so-called Moderns have more time to notice and pay attention to what’s going on around us, and we have more time to collectively organize and to fight injustices. Of course, this is not a new recognition for most black and brown peoples, but rather an opportunity for more people to share in the outrage of what has been going on for centuries—especially in the Modern, western world—to repent, and to turn toward new ways of thinking and being.

The narratives that have fueled the End goals of the Modern western world are being uprooted. Statues and monuments valorizing racism, sexism, slavery, the genocide of indigenous peoples, and other oppressions and violence are being torn down. The narratives of discovery, development, and progress that we’ve taught to the next generation are being questioned and critiqued. And still, the “white power” that has fueled Modernity’s Ends is raising strong opposition to these changes in both direct and indirect ways: Directly, we see white power rallies and resistance to changing the historical narratives and institutions that have supported that power. Indirectly, we hear that the “slow violence” of economic inequity and environmental racism—which poor brown and black peoples experience most often, and most strongly—is simply part of the “normal” experience of life. This violence has gone almost unnoticed in Modernity’s fossil-fueled time, but during “pandemic time,” it’s becoming increasingly easier for many more people to see.

Paying attention to the immediacy of life also means critically (re-)attuning to the worlds in which we live, in a way that addresses Modernity’s violence. It means pausing to make space for multiple voices to help co-create new worlds, rather than jumping too quickly into more End-oriented thinking. The bodies sacrificed on the altar of Modernity’s Ends make it impossible to justify continuing on this trajectory. Before we can work toward finding answers, we’re going to have to sit with the questions. We’re going to have to listen. For many of us, pandemic time is a good time to begin this process.

Finally, acknowledging the end of Modernity’s Ends also means acknowledging that the planet on which Modernity emerged is currently undergoing drastic climate-related change. We don’t yet know what that future will look like. But we do know that it’s impossible to just cling on and work toward the same Ends that were incubated during a period of relative climate stability. We’re living on a planet in transition, and we have to pay attention to the shifting planetary bodies (human and non) all around us. The stable ground under our feet has shifted—if it was ever really stable to begin with. We have to piece together our actions, our thinking, our hoping, and our dreaming in the midst of this instability, as we work together to co-create life-rafts to help carry us through the current and coming planetary transitions.

As with any apocalypse, the end of Modernity’s Ends will be painful, but it will not mean the total annihilation of all known worlds. Instead, it will require uncovering new possible worlds—worlds we can co-create with other members of the planetary community.

Counterpoint blogs may be reprinted with the following acknowledgement: “This article was published by Counterpoint Navigating Knowledge on 1 July 2020.”