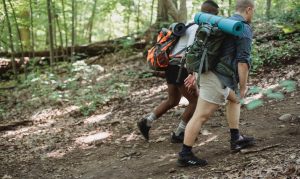 Perhaps most readers know and assent to the idea that “the map is not the territory.” But, do we actually live as if that were true? On a daily basis, I take maps to be reality: google maps that help me bike, ride public transport, or drive to specific places; maps of the stars; maps of a museums; and the “maps” of the library that allow me to find a specific book I am looking for. Furthermore, each of these maps can be isometric, showing the contours of the territory covered, or isogonic, showing the true distance between points, but not both. A decision every mapping is made as to what qualities will be depicted. In all of these cases, I take for granted that the map will lead me to the reality that I seek; that that reality is actually there. But to embody the assumption that “the map is not territory,” is more than just recognizing at an intellectual level that the reality a map describes is not the fullness of the actual reality that is there; it also means that reality is on the move, multiple, and differently constructed depending on how you look at it.

The maps of knowledge used in our educational system are subject to the same realization: they are not describing things as they really are, but rather, they are interpretations of some aspects of reality. It is not that we, as some post-modern constructivists claim, fully construct reality with our language, ideas, and cultures. This would mean (once again) that humans (or at least some of them) are the center of the universe, creators ex nihilo of all reality. No, there are other entities, persons, events, subjects, and realities. There is real “push back” from these “others,” and indeed our own subjectivities are co-constructed by these others. Rather, as Kevin Schilbrack argues, each individual entity has a perspective on reality, and helps to create reality for multiple others. We are all emergent parts of realities that help make up the multi-perspectival worlds in which we live. We can’t see “objectively” the whole, but just because we don’t have an objective view, an “Uber-map” doesn’t mean that we are disconnected from the multiplicity of life around and within us. No, we have a perspective on and are a perspective of reality.

The current map of our educational systems has its origins in the nineteenth-century European Enlightenment mentality. This was a time when history itself along with the many different sciences were emerging. The maps created then between the human sciences and the natural sciences, and the subdivisions within those are still with us today. These maps set boundaries around what counts as anthropology, biology, literature, philosophy, politics, and religion, for instance. One can be highly trained within one of these disciplines in a way that one becomes an expert of reading that discipline’s map of the world, and even becomes a mapmaker: creating new worlds in the image of these disciplinary maps. However, this system has confused the map for the territory. Our educational system keeps trying to identify reality according to these old maps, despite the vast changes that have happened and are happening on our planet. One can only stretch these old maps so far until they rip apart at the seams.

Globalization and climate change mean that human societies and the planetary systems are all changing at a rapid pace: a pace so fast that our old maps are indeed ripping apart at the seams. Reality has, in this sense, gone feral. Ana Tsing and others have created an engaging project to try to deal with this constantly shifting and mixed up reality: The Feral Atlas Project. Like other projects of decolonizing the university, or un-disciplining the university, this one too recognizes that our extant maps are no longer helpful in navigating the realities that we face from our various perspectives on a daily basis. Yet, the university keeps forcing students and reality into these old maps. For one, maps are not just “maps of” a territory out there, they are mapping out territories: they are co-creating the worlds in which we live, or, in other words, they are “emplotments” of a story we are told and that we in turn tell. Again, not in any sort of willy nilly ex nihilo way but in a way that recognizes mapping projects are always co-constructions and in process. It is not just an individual mapping, or even just a human mapping, but multiple planetary others (plant, animal, mineral) co-construct maps along with humans. As Tsing notes, “Other species, as well as nonliving things, make it possible to be human. That this statement is not obvious to many humans at this moment in time is only because of habits of thought that have become powerful over the last few hundred years.”

What can we learn from the rest of the planetary community? How can plant and animal communication become part of our curricula? What can we learn when we make Octopi teachers? What does it mean to listen to what the rivers, forests, or even our atmospheric systems are telling us about the world and how can we co-construct new maps that help us “hear these voices into speech”? Dynamic maps that help us understand the co-construction and entanglement of our worlds, much like the feral atlas project, will demand that we rethink disciplines and the university system in general. We can no longer pretend that knowledge maps of the world are for human beings alone, but rather must recognize that mappings are of and for the entire planetary community.

Counterpoint blogs may be reprinted with the following acknowledgement: “This article was published by Counterpoint Navigating Knowledge on 1 December 2020.”