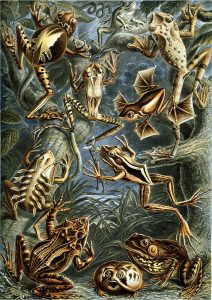 At a recent one-day symposium in Berlin on “The Body, Religion and Planetary Imagination in a Time of Environmental Crisis,” I was asked what I meant when I used the word “entanglement” and whether it was different from “relationality.” I’ve been thinking about this since, and I keep going back to the entangled bank metaphor of evolution. In the closing section of Origin of Species, Darwin ponders: “It is interesting to contemplate a tangled bank, clothed with many plants of many kinds, with birds singing on the bushes, with various insects flitting about, and with worms crawling through the damp earth” (333). Whatever else evolution means for human beings; it means that we are entangled with the rest of life on the planet. In this sense, we evolve with and not out of other life on the planet. We could extend this back to the 14 or so billion-year-old process of cosmic expansion to argue that we are also entangled with everything in our universe. This entanglement means that we are through and through relational creatures; and that life processes and even abiotic processes are also relational.

From my perspective, then, entanglement refers to the genetic, ecological, geological, chemical, physical, biological, and cultural reality that any individual entity, process, or life-form is the result of the interrelatedness of things. This means that we have no control over our entanglement; it just is a fact of living on planet earth today. Relationality, on the other hand, and thinking with the history of feminist ethics and thinking on this term, is the way in which we react to the reality of entanglement. This is my own distinction, and I’m not sure such a distinction really exists outside of this thought experiment but humor me for a little bit here.

Relationality or the way in which one responds to the facticity of entanglement acknowledges that not all relations are good ones: there are violent relationships among humans, and between humans and the rest of the natural world; we exist in a predator-prey-planet, which means we have to relate to some things by eating and drinking them, and eventually, other things will eat or drink us (unless we are cremated); pandemics mean that our relations can also be deadly. Entanglement does not always lead to pretty ways of relating. However, we must relate. Relational ethics then help us to think about the ways to live with and honor the fact of entanglement, rather than to relate to others “as if” we were not entangled.

Now, let’s look at responses to evolutionary theory to think about a couple of ways in which humans have related to the world as if we were above it, or somehow not entangled with it. One of those is to deny that we are always already evolving with rather than “out of” the rest of the planetary community. A fun, but relevant example of this is the meme in which a human (usually male) emerges from a primate, to a civilized-suited male, and then “regresses” back to the primate stage in front of the computer. This image, though admitting our evolutionary nature, still suggests that the distinction from the primate is what makes humans special. There is somehow a negative luddite-esque critique in the way in which the human-male adopts a primate posture again. Other common turns of phrases in English reveal this attitude as well, as when someone is told they are behaving like “an animal,” or are “bird brained,” or should not give in to their “base nature.” These and so many other common phrases in everyday language suggest that the special nature of being human is that humans have evolved “out of” their natural state.

Most of the other presentations in the symposium that I referenced in opening were arguing for a different way of relating to the facticity of our entanglement. Many talked about kinship with the rest of the natural world, or our emergence within the entangled bank of nature, and/or the re-animation of nature and re-distribution of value and agency that is beginning to flood the alienated modern mind with such terms as “new materialisms,” “neo-animisms,” and “agential realism.” From these perspectives, we would act differently, we would relate differently, if we were to acknowledge rather than repress our entangled bodies.

Counterpoint blogs may be reprinted with the following acknowledgement: “This article was published by Counterpoint Navigating Knowledge on 25 May 2022.”