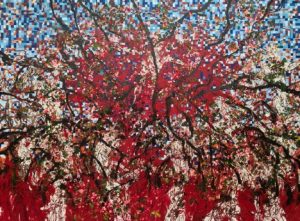 Throughout history, art has been critical to the sociopolitical narrative of society. It has been used as a tool of power by governments and religious institutions, as a method of propaganda, and as a means of protest. A chronology of art becomes a chronology of history, culture, and the natural world. Through art one can piece together a society’s power dynamics, protest movements, notions of beauty, among others—it is essential to understanding a society.

Many artists create to tell a story—whether it is a story that serves or replicates the official account or one that seeks to reframe an established narrative or challenge certain societal notions. Through my work as a painter, I, humbly, attempt to do the latter.

For several years I have immersed myself in the history of the Transatlantic Exchange: I drowned in academic sources, I traveled throughout cities of both continents, I hiked the extremes of both landscapes, and I emerged on the other side with a body of work entitled The Roses of Fibonacci. The paintings tell the story of this Transatlantic Exchange, but reframe certain elements—what if Europe didn’t conquer America at all? What if it was really America who conquered Europe? Or what if the conquering is never over, but is rather a never-ending cycle of give and take—a Fibonacci spiral—that has no conquerors or vanquished? 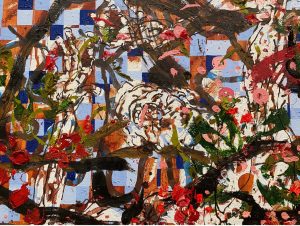 Decree if Death, one of the three large paintings that made up the series, gets its title from Decreto de Guerra a Muerte of Simon Bolivar. This document proclaims “Spaniards and Canarians, count on death, even if indifferent, if you do not actively work in favor of the independence of America. Americans, count on life, even if guilty.” 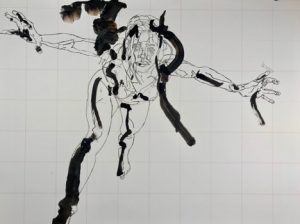 The central figure in the piece is America, a powerful, all-knowing, and confident woman. She is not being subjected or conquered, but rather she is the conqueror. She is depicted rising out of Lake Maracaibo in Venezuela, towering over twelve European men, dominating them with her flora of strangling mangroves and suffocating roses. The roses radiate in Fibonacci spirals out of her vagina, embodying her power as a woman.

In this painting, America is in a pose similar to Christ in Raphael’s Transfiguration in the Vatican Museums or Michelangelo’s Last Judgement in the Sistine Chapel—she is triumphant and powerful. In this retelling of the classic story, a woman is at the forefront, not a man. The role of women as powerful and influential beings is elevated in an attempt to directly challenge the systematic erasure of women from history, and the inequality that still exists in the present. Furthermore, she presents a defiance to what we understand as the traditional conqueror-conquered relationship—where would Europe be today without America. 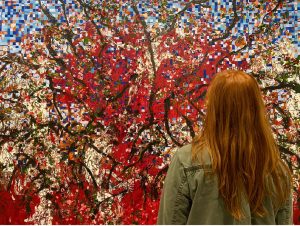 Decree of Death at LnS Gallery.

This painting attempts to explore the concepts of discovery, free will, and destiny. The flowers in the painting have multiple raison-d’etre: Elagabalus’ flowers of death, flowers as America’s vagina, and to pose the mathematical question of whether or not we have freewill. Arranging the flowers in Fibonacci spirals possess the most important philosophical question: is math invented or discovered? Does the universe have an underlying order or are we projecting a system on to chaos to make sense of it? Are all historical events and human interactions of war and love inevitable-simply flowers in the course of human history? Was the history of America and Europe inevitable?

America—a land and culture that is alive and evolving, has been continuously depicted as defeated and beaten down by its colonizers—but despite that abuse, that land continues to thrive, to provide, to be beautifully powerful, and greatly underestimated. 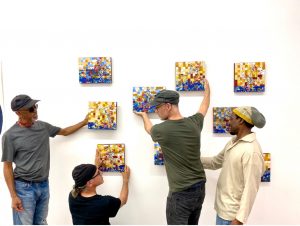 Decree of Death is currently on display a Florida Atlantic University in Boca Raton at “Why Shouldn’t We Talk About These Things at the Table?” curated by Jeanie Ambrosio and AdrienneRose Gionta. A selection of smaller works depicting the Miami landscape are on view at Edge Zones in “Ground Zero,” curated by Ian Peter Hosfeld.

John William Bailly is a French–American artist born in the UK. He is the Artist-in-Residence Fellow at the Deering Estate in Miami. He received his MFA in painting and printmaking from Yale University, and has been a Faculty Fellow of the Honors College at Florida International University since 2004. His work explores the random nature of information and the methods we employ to process it. Utilizing juxtapositions of diverse data and multiple historical references, Bailly’s work intends for us to reflect on the manner in which we conceptualize our realities. He is represented by LnS Gallery in Miami.

Counterpoint blogs may be reprinted with the following acknowledgement: “This article was published by Counterpoint Navigating Knowledge on 1 March 2022.”