Decolonizing for the Planetary Community: Many Worlds, One Planet 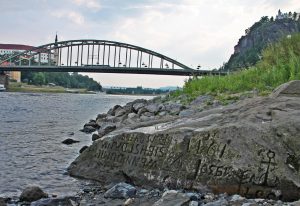 Sylvia Wynter has argued, I think successfully, that the idea of the human and subsequently what the “Humanities” are, grew out of a colonial context. The human was made in the image of the European, western, white (heteronormative and wealthy) male. All other humans were classified as more or less “like animals” or more or less “civilized” according to how well they match the ideal human. Most readers will know this as the system of patriarchy against which feminists, womanists, queer theorists, and many others have been arguing for years.

In addition to this colonial concept of humans, what constitutes the Humanities and social sciences, and also the natural and physical sciences, emerges from this colonial understanding of what it means to be human. In this sense, the human (and all things human) are separate from the rest of the natural world, which is only as good as it is useful or beneficial to the human. Our humanity, then, is automatically tied up with an origin that is somehow out of this world: whether the imago Dei in theology, or ideas of Reason and rationality in philosophical discourses, or both. This provincial understanding of knowledge (the western modern model) is then projected as objective and the replication of academic disciplines the world over continues the colonization of minds and bodies.

A whole host of theories—postcolonial, decolonial, liberation, critical race, disability studies, deconstructive thought, as well as those already mentioned above—have weakened colonial thinking and all its isms. However, I would argue that such deconstructing and decolonizing does not take place in a vacuum. In other words, there is always a context within which one is doing the decolonizing and deconstructing: be it a parochial, national, and/or global one. This context is not in a place outside of the ongoing evolving relationships that eventually make up “the planetary.” We are, in other words, planetary creatures and this provides us with common grounds from which to deconstruct, decolonize, and then reconstruct “better” worlds that are more just and promote the flourishing of more planetary bodies.

From this perspective, we need to foster some un-disciplined thinking to rethink humanity away from theological, national, and reasonable / rational abstractions and toward the planetary. We need to re-attune our ways of thinking about what it means to be human toward the creaturely context of the planetary, and I think religious studies has a role to play in the development of something like the planetary humanities. Religion, if nothing else, is about the critical process of re-reading and re-connecting human beings into some sort of meaningful narrative about reality. It is about re-attuning to the worlds around us in ways that take serious accounts of suffering earth bodies (human and non). Religion, then, is part of what it means to be human: regardless as to whether one is atheist, agnostic, or a believer that identifies with some sort of faith tradition, we all, as human beings, make meaning out of our daily lives and are constantly re-attuning our minds and bodies to the evolving bodies around and within us.

At this point, in worlds marked by climate change and globalization, re-attuning to suffering earth bodies means paying deep attention to those suffering from climate change: from severe drought and forest fires, to rising waters, to species extinction. How might we re-attune to these bodies, from within our own worlds, in a way that acknowledges their suffering and works toward building different worlds that decrease that suffering and promotes planetary flourishing? A decolonial approach to religion and the study of religion, might start by eroding that original boundary that separates humans from the rest of the natural world, thereby making a place “above” from which all else can be judged. In doing so, the disciplinary divisions between the humanities and the natural/physical sciences begin to fade. Indeed, it is this disciplined way of thinking that has created the worlds in which we live and all problems therein.

Religious studies has also been pretty forthcoming in critiques of mere objectivity when it comes to knowledge claims and knowledge production. Education, in other words, is always education for. The disciplines created by the western modern mind—one that argues for a non-human world that can be objectively known (and used) by certain types of human beings—has educated for the type of world in which some humans can use other animals and the rest of the natural world (and those humans who have not been seen as fully human). The disciplines created by the western modern mind have educated for the world of climate change and economic inequality that we find ourselves in. So, perhaps we might decolonize the curriculum and our minds and bodies through a bit of re-attuning our thinking and our acting to the planetary community of which we are a part. This doesn’t mean “one size fits all” education, but rather, curricula can take the many shapes that the biologically and culturally diverse worlds of the planet contain.

Counterpoint blogs may be reprinted with the following acknowledgement: “This article was published by Counterpoint Navigating Knowledge on 14 September 2022.”

Very nice essay raising important considerations for a natural ethics. Without explicitly delineating it, I think you’ve pointed to the very nexus of human life: the intersection of the natural and spiritual sides to each human life at the point of awareness of connectedness with all other life in the natural world, starting with each other. I hope readers think deeply about the source of this link.