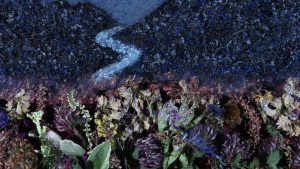 A flowing sound of wind and waves. A transforming image. Blue. Red. White. Green. Grey. A voice of an elder woman. The story begins.

An Ovoo, a shamanic stone altar, opens the scene of the animation film The Fourfold by Alisi Telengut. Comprised of an ever-growing heap of stones and rocks, each Ovoo has a sacred shrine on the top to which Khatags, colorful ceremonial silk scarves, are tied as decorations and gifts to the deities and the spirits of the place. These altars are special places for Mongolian peoples, where they worship Mother Earth, the rivers, the ancestors, the spirits of the Earth, and Father Sky, Tengri. Any person approaching the Ovoo would circle around it three times as a blessing and out of reverence, in a dynamic performance of thanksgiving between humans and the land.

A woman offers a milk libation to the mountains, to the forest, to the sky with its foaming white clouds. Milk is considered the most precious offering in nomadic cultures, and it is presented to honor Tengri, Mother Earth, the divine rivers, and the ancestors. Flowing milk nurtures the deities of nature, dwelling in the land along with humans and the other-than-human inhabitants of the sensuous landscape, our homeland, in a reciprocal relationship. Flowing down the river, we enter a forest with a shimmering undergrowth under a cobalt blue sky.

Moving with and through the forest that grows as far as the eye can see, we reach the setting of a ceremonial bonfire. The fire is also a god. Around the dancing fire stands the silhouettes of the botanical persons, silent and dancing participants in the sacred ceremony. The movie ends with a flowing river whose waters are milk and ice, and with the perpetual singing and dancing of the plants in the thriving canopy of life. 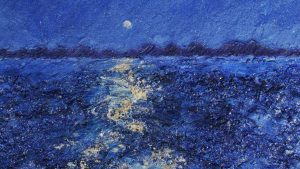 The Fourfold (2020) is the most recent animation film by Alisi Telengut. Alisi is a Canadian artist of Mongolian origin, currently working on her PhD at the Filmuniversität Babelsberg Konrad Wolf in Potsdam, Germany. Her art draws from her own story and heritage rooted in Mongolian culture, as much as from the current thriving conversations about animism, shamanism, Indigenous knowledge systems, and respectful human-environmental relations. The embodied and dynamic flow of colors, images, sounds, voices that are The Fourfold is a celebration of the vitality and animacy of the world. The animated images, along with the music, bring us into a multi-sensorial deep-experience, into the pulsing flesh of the world. Our eyes, ears, and even our skin ­are led into this journey by the narrating voice, that of Alisi’s grandmother, Qirima Telengut. Inspired by the stories of her grandparents who lived as nomads on the Mongolian grassland in their youth, Alisi’s art is not only an artwork with a unique personality, but also an insider ethnographic research.

Her artistic quest converses and draws inspiration from the thriving and current discussion about animism. After this term had been dismissed due to its colonialist and evolutionistic connotations, in the last decades scholars of religion and anthropology reintroduced animism as a fruitful concept. A new, relational and decolonizing usage has emerged. According to the religion scholar Graham Harvey, ‘animists’ are “people who recognize that the world is full of persons, only some of whom are human, and that life is always lived in relationship with others. Animism is lived out in various ways that are all about learning to act respectfully (carefully and constructively) towards and among other persons.” Accordingly, with personhood being acknowledged in spirits, deities, animals, plants, stones, mountains, seas, rivers, places, and human artifacts, nature is recognized and experienced as a living and animate community, and due care and respect. As a result, sociality is not relegated to humanity, but extended to the broader web of life.

Tengri gives the name to Tengrism, the animistic and shamanic tradition of Mongolia. If animism is the cosmological and ontological horizon, shamanism represents the meshwork of relational practices, ideas, and performances belonging to this horizon. Shamanic performances aim at establishing connections and communication with other-than-humans, in an effort to establish or restore the well-being of the human community, and build and enhance respectful relations with the deities, spirits, ancestors, animals, plants, and mountains. The role of the shaman is that of a cross-species mediator: in his/her ecstatic journeys, the shaman is capable of communicating with the different other-than-human inhabitants of the sensuous landscape, of the relational cosmos. In order to do so, the shaman has a profound and intimate knowledge of and relation with the local environment, the multiple voices, personalities, and perspectives of the encompassing land. 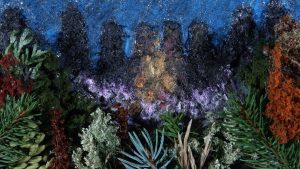 The Fourfold enacts a moving play of correspondences: between the ritual ceremonies in Mongolia and the animated film, between rituals and stories, between sounds and colors, between voices and shapes, and between drawing and weaving. Alisi’s art itself can be seen as animistic: her animation movies are created frame by frame under a camera, with painting as the medium; this generates the movement and transformation, the animation. This technique expresses the strong connection between the hand-made and painted visuals of her films with the ancient and traditional hand-crafts. Every hand-made work – be it drawing, weaving, braiding, gathering, painting, carving – is material, bodily, and it requires time, patience, and care. Hands create images, the camera creates movement, in a flow of stories and transformations. From this viewpoint, animated movies are among the most engaging artistic expressions for representing and embodying the animacy of life, for deep-listening and giving voice to nature and the different ways of being human.

Ceremonies, rituals, and art works are all celebrations of reciprocity and respect among the different persons that dwell in and make the world. Ronald Grimes understands performance as “currency in the deep world’s gift economy”, as a gateway to nurture interconnection. In this perspective, an alliance between art and animism appears powerful and more compelling than ever. According to the eco-philosopher Val Plumwood, the role of art, writing, and storytelling is crucial for re-animating and re-enchanting the world, and for allowing nature to speak in the active voice. In order to rediscover ourselves as members of the ecological community we belong to, “we need to spread concepts of agency and creativity more widely” into the world, so that “we become open to hearing sound as voice, seeing movement as action, adaptation as intelligence and dialogue, coincidence and chaos as the creativity of matter.” Through re-storying shamanic and animistic traditions of Mongolia, Alisi Telengut creates a new performance, a new story. Her movie The Fourfold is a precious gift to the world and a shimmering celebration of life.

Anna Perdibon is a scholar in the fields of religion and anthropology, and a writer. She is the author of Mountains and Trees, Rivers and Springs: Animistic Beliefs and Practices in Ancient Mesopotamian Religion (Harrassowitz, 2019), and of academic and disseminating writings. She engages with new animism, religion and nature, eco-cosmologies, and anthropology of plants. Especially, she delves into botanical personhood in ancient and contemporary cultures, with a particular interest in Indigenous and marginalized worldviews, botanical stories and myths, and gender. In her more creative writings, she explores the relations between animism, art, story-telling, and ecology.

This Counterpoint blog may be reprinted with the following acknowledgement: “This article was published by Counterpoint Navigating Knowledge on 21 April 2021.”

Photo credits: The images are stills from the film The Fourfold, © Alisi Telengut 2020.