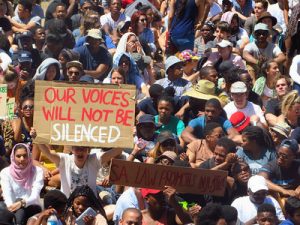 Each year on the 16th of June, South Africans commemorate Youth Day. It is a day on which we remember the sacrifices made by young people in the struggle against apartheid. In particular, we remember 176 people who were killed by the Apartheid police in the 1976 Soweto Student Uprising. They were part of a group of approximately 20,000 students who took to the streets to protest racist policies in the nation’s education system. In 2015-2017, young South Africans were once again at the forefront of the #RhodesMustFall and #FeesMustFall movements, which called for free, quality, decolonized higher education.

However, a rift has developed between these younger activists and their 1976 counterparts. One of the #RhodesMustFall student leaders, Ntobo Sbo Qwabe, said in 2016, “Older black people who want to silence us on the basis that they fought against apartheid need to shut the fuck up!!! We are here because you failed us! So please!” His statement expresses the frustrations of the so-called “born free” generation, who were born after the end of political apartheid in 1994 yet still live with the ongoing injustices of racism, poverty, unemployment, poor education, and hopelessness that their parents and grandparents faced before them. It has been almost three decades since the end of political apartheid in South Africa, and while this new generation of South African youth has experienced the “right to have rights” (as Seyla Benhabib describes it), the enactment of those rights has not been realized in any significant and transformative manner.

South Africa has a predominantly young population, with the average age of 27.6 years. Shockingly, 55.5 percent of the population lives below the international poverty line of less than US$2 per day, and unemployment sits at 29.1 percent. Moreover, South Africa remains the most economically unequal society in the world.

Achille Mbembe, an African philosopher and political scientist, notes that young black South Africans are expressing their political, social, and economic discontent by turning first, to a politics of identity, pitting the races against one another, and second, to a generational politics, where young persons are increasingly distrusting of older activists and liberation leaders as “sellouts.” Finally, the young are turning to a politics of impatience, where they seek rapid and significant transformation by revolution rather than social evolution.

Young people, in particular, experience the utter hopelessness of the slow violence of poverty, racism, and injustice. In short, they are losing hope for the future. In this regard, one could question whether these young South Africans are really “born free.” Language matters. It can witness to the truth and communicate it with clarity and intent. Or, as the student activist Lovelyn Nwadeyi notes, language can be used to “perpetuate a deceptive and dangerous story” of untruth and a false reality.

At a Youth Day lecture, commemorating the students who were slain in the 1976 Soweto Massacre, she said,

I completely and unequivocally reject the term ‘”born free” because this is a term that perpetuates a deceptive and dangerous story about the reality of South African youth. Phrases like “born free” and “rainbow nation,” amongst others, have come to find comfort in the mediocre lexicon that we have entertained since the end of apartheid in South Africa. I personally struggle with words like “born free” and “rainbow nation” as I’ve experienced these words as tools for silencing, silencing and diminishing the genuine grievances of young people, and particularly young South Africans of colour. I also think that the process of meaning making that is associated with this ideology of “born free-ism” and “rainbow-ism” is one of the most insidious and powerful attempts at whitewashing the complexities of the struggle for liberation in this country.

Indeed, language matters! Just as we question the uncritical use of the phrase “post-apartheid South Africa” (in what “real” sense has apartheid ended in South Africa?), we also need to question the use of the phrase “born free.” What happens when we label a whole generation of persons as “free” just by virtue of the date of their birth? Nwadeyi suggests that in doing so, we politicize the act of their birth and indeed by virtue of that, we politicize the very existence of children and young people. We do not have the right to impose a label, particularly an untrue label, that denies the suffering and daily reality of the majority of young South Africans. Nwadeyi notes, “It is part of perpetuating a false narrative that disguises the terror, the violence, the deliberateness, and the logic of erasure, that is core to the formation of the story of modern South Africa at various points in this 25-year long journey after 1994.”

Dion Forster is Professor of Ethics and Public Theology at Stellenbosch University, South Africa. He is the author of numerous books and articles in theology and ethics. His research focusses on social ethics, economic ethics, and political ethics. Dion is the director of the Beyers Naudé Centre for Public Theology. See: http://www.twitter.com/digitaldion.

This Counterpoint blog may be reprinted with the following acknowledgement: “This article was published by Counterpoint Navigating Knowledge on 26 May 2021.”