Art Meets Astrology: Towards a Broader Understanding of Art History 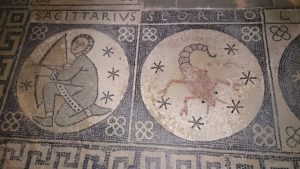 Traditional art historians and scholars ignore or even deny the importance of astrology in art. This limited view had led to some strange interpretations of artworks. It also overlooks Aby Warburg’s advice of 100 years ago that important works of art cannot be fully interpreted without some basic knowledge of astrology. Although Warburg remains among the most influential art historians, his point is largely ignored.

Many works of Leonardo da Vinci, Albrecht Dürer, Tizian, Andy Warhol, Salvador Dali, and other artists were inspired by astrology. This is true not only for works exhibited in museums or documented in old books but also for castles, palaces, town halls, cathedrals, baptisteries, bell towers, and middle-class houses, which were often, in all epoques, decorated with astrological symbols.

Often the symbolism is hidden for reasons I’ll discuss in a bit. The most prominent example is da Vinci’s “The Last Supper,” which has yielded a good deal of confusion among art historians because they ignore the influence of astrology on the depiction of the twelve disciples. “The Last Supper” is a hidden portrayal of the zodiac. Starting from the right: Simon is the Aries, dynamic and forward with his arms, followed by Thaddaeus, Taurus, with a strong neck, protecting himself and perhaps his belongings with his arms. Matthew, the Gemini, is open for everything, in contact with everyone, turning his head to one side, his arms to another. Philipp, Cancer, is vulnerable, sensitive, with a lot of female energy. Jacob, Leo, is self-reliant, taking his place as a king with his arms spread wide, etc.

Many works by Tizian and Dürer too contain astrological principles in hidden or esoteric ways, which raises the question: these artists lived in a period when astrology was prestigious. Certain popes had their own astrologers, whom they consulted regularly to identify the best time for important decisions. After his election in 1503, Julius II even asked his astrologers to set the best date for his inauguration. Like him, many theologians were convinced that God shows his will through the stars.  So why have some of the greatest artists hidden their astrological meanings if astrology was accepted and unquestioned?

It seems they wanted only the initiated to understand the deeper meaning. There was a significant gap between the astrology presented to ordinary people and what the initiated understood. The mostly illiterate commoners followed the stars and the moon mainly for agricultural purposes. Artists and other initiated used astrology for a deeper understanding of cosmic circles and the circle of life—issues most peasants and craftsmen didn’t have the luxury of spending time on in their focus on survival. Leonardo and Tizian were members of esoteric circles , possibly in the Knights of Templar. Leonardo also used mirror writing so that only few could follow it. These artists wanted to address people whom they regarded as equals in their ambition to discover the meaning of life. So, too, for many unknown master builders who used astrological and esoteric symbols in the great cathedrals.

There are, however, also examples of unveiled zodiac and planetary symbols throughout western art, not the least in the cathedrals, where signs of the zodiac are found in the tympanum, the decoration above the portal that leads into the cathedral. This entryway is the border between the sinful world and the sacral, divine area of God. Entering the area of the divine was a kind of initiation rite which was performed in full awareness of the passage from profane to sacred. Of course, Christ is the most frequent figure in the tympanum, but the zodiac often placed around him demonstrates that the ruler of the universe makes use of the stars as his tools. Baptisteries too were often decorated with the zodiac, mostly as a mosaic in the floor. Baptism was the entrance into the church of Christ, the cosmic order. And the zodiac was a symbol of that order.

With the end of the Middle Ages, art was no longer limited to depictions of the sacred. The flourishing towns of early modernity gave artists new locations on which to place their art. Many, especially in Northern Italy during the booming Renaissance, decorated public buildings with astrological symbols to express the connection with this important spiritual and knowledge tradition. The art historian Dieter Blume, one of the few who acknowledges astrology as a source of art, says, “astrology was part of communal self-expression.”

The age of enlightenment and the industrial revolution saw a decline in the influence of astrology. The cathedrals of the new era were factory buildings, railway stations, mansions for the new capitalists, and housing blocks for the growing urban population. The new ruling classes were not very interested in metaphysical symbolism.  Yet astrology never completely disappeared. Art Nouveau, historism, symbolism, and abstract art picked up its symbols again. Alfons Mucha, Hilma af Klint, Salvador Dali, Friedensreich Hundertwasser, and Andy Warhol are some of the prominent figures who made their tribute to astrology.

But the real comeback of astrology came in the twentieth century with all its catastrophes. As it became obvious that technological progress doesn’t mean ethical progress, many lost belief in eternal truth and moral certainty. Artists like Picasso, Hundertwasser, and Dali both reflected this disorientation and tried to give people cosmological orientation. They did so in part by using astrology.

The connection between art and astrology is really quite natural: Art expresses current and timeless ideas in a visual form. Astrology gives a broader understanding of these ideas, expressing the idea that we are not isolated but connected to tradition. It helps people searching for orientation. Both art and astrology share the desire for cosmic harmony and aesthetics. In this, astrology is not far from religious systems as it offers a framework of meaning beyond physical reality.

Scientists, artists, astronomers, and astrologers for centuries have been convinced that there is something like a cosmic harmony. The great Johannes Kepler and many others aspired to discover it. Only since the enlightenment and rationalism have scientists transferred the search for the cosmic order to the realm of scientific positivism on one hand and pure subjectivity and relativism on the other. They deny any broader context of the physical and metaphysical world.

Last but not least, to acknowledge that astrology has always been an important source of inspiration for artists does not mean one believes in or practices astrology. It is an acceptance of the historical record.

Klemens Ludwig is a writer and president of the German Astrologers’ Association (DAV). He has been practicing astrology since the late eighties and has published several books on the subject, among them “Astrology in Art.”

This Counterpoint blog post may be reprinted with the following acknowledgement: “This article was published by Counterpoint: Navigating Knowledge  on 12 December 2018.”

[…] if there’s such a thing as a science of astrology. Even so, it is undeniable that the art of astrology has existed since the beginning of time. Every civilization with an interest in astronomy has […]