Anthropocentrism and Quietism: Scylla and Charybdis for an Integrated Migration-ecological Ethics? 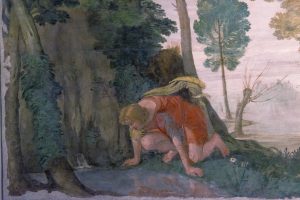 When seeking to develop an ethics that integrates concern for ecological devastation with international migration, rich material abounds. Worthwhile responses to these challenges can be found that range from the empirically rigorous to the culturally potent to the theopoetically creative. Given the stakes involved, it is fitting—indeed, encouraging—that these resources exist.

Yet if one accepts as a premise of an integrated ethics of migration and ecological devastation the conviction that how we treat each other as humans is inseparable from how we as humans treat the rest of nature, then a concern arises as to the intersection between intraspecies and interspecies dynamics. This concern takes the form of a dilemma between anthropocentrism and quietism. Respectively, these terms refer to a sense of human distinctiveness that shades into superiority—not just over other species, but also over other cultures, an undeniable point given the long and painful history of associating cultural otherness with less-than-human status—and a sense of human indistinctiveness that, a bit ironically, shades into relativism, passivity, or quiescence in the face of social and ecological injustice. Are anthropocentrism and quietism a kind of Scylla and Charybdis for an integrated migration-ecological ethics?

At the risk of seeming digressive, consider the classical Chinese text, the Zhuangzi, which contains a proverb known as the “happy fish” passage. In this story, the Taoist Chuang Tzu and the Confucian Hui Tzu are out strolling along the Hao River. Viewing the river below a dam, Chuang Tzu leans over and remarks, “Look at these minnows darting here and there. How pleasurable is the life of a fish.” His conversation partner Hui Tzu is not impressed; he says, “You are not a fish. How do you know what gives pleasure to a fish?” Chuang Tzu’s response is illuminating. His rejoinder: “You are not I. How do you know that I don’t know what gives pleasure to a fish?” The proverb concludes by Chuang Tzu’s claiming that he knows the fish to be happy because of his vantage point in overlooking the river.

In light of the quietism/anthropocentrism dilemma raised above, note the fault-lines within this conversation. On Hui Tzu’s side, there is the option of asserting epistemic unity between humans but placing a boundary between humans and other forms of life. On Chuang Tzu’s side, there is a loosening of epistemic human bonds that allows the possibility of a human connection with nature, yet also suggests a sort of ethical quietism verging on complacency. Accepting either of these options would cut against asserting continuity between humans on the basis of continuity between human and other forms of life that I believe is essential to any integrated migration-ecology ethics. Both sides portend trouble.

Take quietism, for instance. In asserting human-nature continuity, as Chuang Tzu does, this suggests that all that is nature is well, in that the fish is happy because the fish is swimming in the stream. If such is the case, might not humans be content to claim as natural all that we are doing to dominate and destroy the ecosystems of other species? For if we are a part of nature, including our capacities for language, planning, values, and organization that make our industrial civilization possible, what is not natural that humans do? Indeed, the history of attempts to invoke nature on behalf of opposing social and political beliefs bears out a profound equivocation. Clearly, asserting something as natural, and hence good, is insufficient to ground an ethics of either migration or ecology.

As for anthropocentrism, perhaps the reason Hui Tzu cannot consider the fish when looking at the river is because, as with Narcissus, he is too preoccupied with his own human reflection. If invoking narcissism seems a bit ungenerous, consider that in developing an ethics of nature that emphasizes human responsibility toward other forms of life, one almost invariably has to find something uniquely human about the challenge—e.g. normativity for this or that human context, discursive thought, etc. And I struggle to imagine how this does not represent some form of anthropocentrism. It could well be asked: is a certain type of anthropocentrism really so bad? Might there not be something noble in thinking of our unique capacities as humans to guide us, something akin to Barack Obama’s ca. 2008 slogan “We are the ones we have been waiting for”? In recognizing that we cannot speak for nature, but only for ourselves, we can admit that any ecological ethics or migration ethics is a human project for human purposes.

Alas, I do not believe that even a self-aware, responsible anthropocentrism would be worth the cost. There are many vital and compelling projects that marry responses to human cultural and social problems to deep reflections on humanity’s being within a nature that transcends ourselves. I am thinking here of Carol Wayne White’s project on black lives and sacred nature, or Mike Hogue’s project on American immanence, which insists that it is by realizing ourselves as terra bēstiae that we can summon the courage to take the responsibility for the world we have created (3). I am also thinking here of Eduardo Kohn’s “anthropology beyond the human.” Among its other damaging entailments, anthropocentrism would seem to impair, perhaps severely, all of these projects.

If this all seems too abstract, consider the notion of taming. “Taming” is a potent metaphor for interspecies ethics. In Antoine de Saint-Exupéry’s wonderful children’s classic The Little Prince, for instance, taming names a kind of meaningful interpersonal encounter akin to Martin Buber’s famous framing of relationships in terms of “I-It” and “I-Thou,” in which to be a “thou” is to be, just as with taming, intimately known and set apart from all the world. The taming of a wolf is a central legend in the life of Saint Francis of Assisi, who was lionized by Lynn White, Jr. as a possible ecological patron saint and selected as namesake by the current ecologically minded pope. Yet is taming really such a great metaphor? Might there not, in fact, be some sense in which taming could represent a kind of human domination over nonhuman life, perhaps even almost a sort of colonization of nonhuman life? Should wild things not stay wild?

My point is not to challenge actual practices of taming as animal domestication, whose significance to human life, both historically and today, has been enormous. My point is that within a discussion framed by anthropocentrism and quietism, such questions become contradictory and confused in a way that can be difficult to escape. To resist taming on the basis of keeping wildness wild, for instance, might itself be a bit of human projection onto nature, a bit like Timothy Treadwell’s romanticized friendship with the grizzly bears who eventually mauled him to death. To continue with the colonialism analogy, extolling wildness in opposition to taming might in fact represent a sort of “Orientalism for nature,” referring to Edward Said’s famous formulation for how Westerners historically projected upon and exoticized other cultures.

How real is this anthropocentrism/quietism dilemma, and can its horns be escaped? I do believe that the dilemma is real, and aside from the benefit of simply becoming aware of the dilemma and keeping it in mind, there are at least two paths out of the dilemma that strike me as particularly promising.

One path is to recognize a distinction between anthropomorphism and anthropocentrism, with preference for the former. Such a move is made in Michael Raposa’s project on theosemiotics, and it is particularly helpful for ecological ethics. Another path is to apply ordinal logic to the study of borders, thus articulating a topology of boundaries and boundedness—whether these involve the boundary between citizen or non-citizen, human or non-human, animate or inanimate, or nature as a closed or open system. This ordinal approach to borders—which can be called b/ordering—responds to the work of Henk van Houtum, and it is particularly helpful for an ethics of migration. As sites of power manifested, of families separated, of alienation and friendship, of ecological continuity amidst political discontinuity, and of the limits of civil and political order, borders represent a stimulating and dangerous juxtaposition of the real and imaginary, continuous and discontinuous, and inclusive and exclusive. In brief, borders represent both challenge and opportunity for an integrated ethics of migration and environmental degradation. What makes b/ordering a way forward is that this approach takes account of all these contradictions and, in distributing border-related distinctions across different orders of analysis, turns contraries into complements and generally avoids dead-end binary logic.

In any case, whatever contrivances might be detected in my framing of this discussion, it seems to me that the problems I am discussing are far from being merely academic. In a world of complex emerging political alignments that exploit interspecies or intraspecies divisions on the basis of continuities elsewhere—shoring up human rights on the basis of anthropocentrism, for example, or promoting an “ecofascism” whose expressions mix love of nature with hatred for outsiders in jarring ways—these issues matter.

Gary Slater is a Humboldt Fellow based at the Institut für Christliche Sozialwissenschaften at the University of Münster, Germany. With training in philosophical theology with a specialty in the thought of C.S. Peirce, he writes on theological ethics and pragmatist philosophical theology. His first book, C.S. Peirce and the Nested Continua Model of Religious Interpretation (OUP 2015) developed resources in Peirce’s work for these fields. His current project is a book on Pope Francis’ integral ecology as a culturally creative response to the integrated challenge of ecological displacement and forced migration. He is also Editor of the American Journal of Theology and Philosophy.

This Counterpoint blog may be reprinted with the following acknowledgement: “This article was published by Counterpoint Navigating Knowledge on 31 March 2021.”