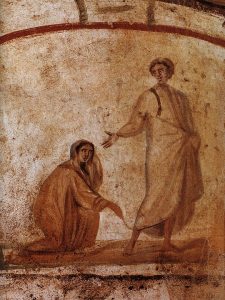 In my May 2022 blog for Counterpoint, I was reflecting on how collective crises like the war in Ukraine, a global pandemic, and (often racialized) threats to democracy inescapably distract from the mounting, world-encompassing catastrophe of climate change. All these matters rightly demand and dangerously divide our attention. Now another such demand locks eyes with us. This June, the U.S. Supreme Court overturned Roe v Wade and with it the right to abortion.

Many of us are only slowly absorbing the shock. Women’s reproductive liberty has been protected under the 14th Amendment of the Constitution for a full half century. It was in place just as I came of age. So indeed I have taken it—along with a grand host of women’s rights—for granted. I have long felt free to pour my feminist theology into the service of matters aside from abortion politics—into, for instance, the intersections of gender, LBGTQ+ issues, race, class, ability, and always into the intersectionality of all the relations that embody our ecology.

So now this great leap backward. All it took was the Republican party stacking the US Supreme Court with Trumpist conservatives. This despite the fact that there has never been a smaller percentage of US citizens believing that abortion should be illegal in all circumstances (13%). And never, since Gallup began polling in 1975, a larger percentage thinking it should be legal under any circumstances (35%). Currently, 53% of adults say it should be legal in “all or most cases.” Views by religion vary greatly with almost half (48%) of Catholics supporting its legality in all or most cases, 60% of mainline Protestants, 33% of Evangelical Protestants, and 80% of Jews. The Public Religion Research Institute finds that 46% of white evangelicals oppose the overturning of Roe v. Wade.

This issue of abortion therefore demands direct theological response. The success of anti-choice politics depends upon its appeal to conservative Christians and thereby upon a certain version of biblical validation. So I want  to make tidily available a two-Testament biblical counterargument (not as pro-choice, as that would be anachronistic for the Bible, but as anti, anti-choice).

Biblically, one must always note how crassly anachronistic anti-abortion appeals are to a book which has no concept of abortion. Biblical authors did however address the value of the fetus in terms of penalties for causing a miscarriage. So let me quote in full  the passage that comes closest in either testament to articulating a position relevant to abortion. “When people who are fighting injure a pregnant woman so that there is a miscarriage, and yet no further harm follows, the one responsible shall be fined what the woman’s husband demands, paying as much as the judges determine. If any harm follows, then you shall give life for life, eye for eye.” (Exodus 21:22-24).

That’s it. The possibility of the penalty for murder is simply not raised in relation to the death of the fetus. It is raised only if other “harm follows,” that is, to the only other person potentially at risk, the woman suffering the blow. The penalty for causing a miscarriage is a monetary fine much as penalties were for other, non-lethal harms (by the time of the Hebrew Bible, “an eye for an eye” meant not physical body parts but monetary compensation proportional to the harm done). The matter of murder pertains strictly to harm done to (born) persons. If the woman dies, the murderer shall be sentenced to death as with any murder.

While the  rabbis taught the Genesis call to be fruitful and multiply, the rabbinic priority of the mother’s life remained indisputable. The  Mishnah, the third-century (CE) foundational codification of Jewish law, makes clear the ethical legitimacy of terminating a pregnancy under certain circumstances, even at a pregnancy’s end: “If a woman is having difficulty giving birth, one may dismember the infant in the womb and remove it limb by limb, because her life comes before the fetus’s life” (Mishnah, Ohalot 7:6; see also here). In short, whether accidentally or deliberately caused, the killing of the fetus is not identified as murder.

Perhaps because of Jewish familiarity with biblical and rabbinic texts, pro-choice advocates rarely find themselves in arguments with Jewish communities but rather with a range of conservative Protestants and Catholics. So what about the Second Testament? Simple answer: it says nothing at all about abortion or miscarriage, willed or accidental. Nothing. That doesn’t mean one cannot make arguments based on Second Testament texts for a pro-life position. But one cannot claim them as “the biblical position” in any literal or authoritative sense.

The one use of a term that comes anywhere close is by Paul in 1 Corinthians 15:8, when he refers to himself as what is usually translated “one untimely born” (ektroma). This may be interpreted in a number of  ways but not as physical abortion as Paul was clearly born live. Aside from this mention, the concept does not occur. Jesus suffering the little children to come unto him is not a call to fetuses.

What might Jesus, with his teaching of care for the wretched of the earth, say to this matter? I can only speculate with the help of feminist Christians who have worked far more deeply on this issue than I. As the key point, they take Jesus’ priority as care for persons in anguish and in the margins. (Jesus, like all in the ancient world, has no concept of unborn persons.)

Rev. Lauren Jones Mayfield, chairperson of Planned Parenthood’s national Clergy Advocacy Board, brings the point home about Christian ethics: “I see Jesus as one who continually meets folks who are at the margins of society and listens to them and amplifies their voice and welcomes them . . . When we are on the side of the marginalized, I think that we are with the patients who are walking into the health centers [to obtain abortions] rather than protesting on the sidewalks outside of them.”

In her superb and timely Abortion and the Christian Tradition: A Pro-Choice Theological Ethic (2019), Margaret Kamutsaka reflects on how a Christian pro-choice position affirms both the value of fetal life and the priority of the life of the mother, on whom the burden of decision falls. She asks what the good Samaritan might do. Building on the idea of caring for those in dire straits, Kamutsaka, like Mayfield and indeed like all responsible readings of the gospels, imagines “Christ the Samaritan stopping to help the wounded pregnant woman on the road, accepting her decision that her pregnancy is unwanted, and standing next to her and comforting her as she is undergoing an abortion.”

Because of the cancellation of women’s right to make their own decisions in matters that concern their intimate lives, a horrifying new proportion of women will, for the foreseeable future, be pushed into the margins, forced to seek illegal help for secretive abortions or else to bear and raise unwanted children, often with the tremendous burdens of scant resources. It will of course be women of color and women in poverty bearing the brunt of this new, or rather renewed, oppression.

I hope religious and secular communities in every state find ways to help women make their difficult decisions about welcoming or terminating a pregnancy, with the issues and timing of fetal viability carefully considered. This means that—by a half century of US Constitutional right and by thousands of years of religious right—it is not the potential person but the actual person whose needs take ethical priority.

Catherine Keller is George T. Cobb Professor of Constructive Theology in The Graduate Division of Religion, Drew University. Her books include    Apocalypse Now & Then: a Feminist Approach to the End of the World;  God & Power;  Face of the Deep: a Theology of Becoming; On the Mystery;  Cloud of the Impossible: Negative Theology and Planetary Entanglement; Political Theology of the Earth: Our Planetary Emergency and the Struggle for a New Public.   Facing Apocalypse:  Climate, Democracy and Other Last Chances is the most recent. .She has co-edited several volumes of the Drew Transdisciplinary Theological Colloquium, including Entangled Worlds: Religion, Science and the New Materialism, and Political Theology on Edge :Ruptures of Justice and Belief in the Anthropocene.

Counterpoint blogs may be reprinted with the following acknowledgement: “This article was published by Counterpoint: Navigating Knowledge on 07 September 2022.”