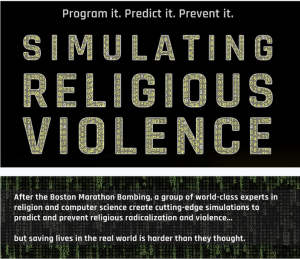 “If we’re going to successfully combat violent extremism, we’d better understand all of the factors because we can’t change minds without knowing what’s in them. And we have to do so mindful of the fact that understanding and acceptance are not the same.” – John Kerry

In her newest documentary feature film Simulating Religious Violence, producer and director Jenn Lindsay looks into how technological innovation—and more specifically, artificial intelligence—can contribute to the understanding and research of social behaviors like radicalization, religious violence, and xenophobia. The film tells the story of an expert crew of computer scientists and religion scholars who are called to action by the 2013 Boston Marathon Bombing, a terrorist attack perpetrated by two young religious extremist brothers. After the bombing, the scientists develop cutting-edge technology to investigate the causes of such behavior. They travel to refugee camps in Greece in order to understand and simulate connections between religious extremism and the refugee crisis. The film is also a broader meditation on the prospect of taking specialized academic learning out of the ivory tower and into the “real world” to alleviate complex social problems.

Radicalization, religiously rationalized violence, and refugee displacement are urgent large-scale crises in today’s world. Responses range from traditional military campaigns, grassroots activism, to politicized gestures, but no one has been able to come up with anything beyond short-term band-aid solutions to what is a long-term problem. This film captures the story of invention and personal purpose that goes into developing technology that can make the world a better, safer place. The team of scientists in the documentary adopts a “thinking outside the box” approach to test and validate scholarly theories about what causes religious violence. Their findings, they hope, will lead them to long-term concrete public policy proposals that have the potential to prevent further tragedy stemming from religious extremism. Throughout their endeavor, called the Modeling Religion Project, they attempt to use digital simulations to predict and prevent religious radicalization and violence.

What does it mean to use simulations in this way? Computer simulations are used in many sectors to teach us, guide us, and provide virtual environments as experimental spaces—like flight simulators, war games, surgical dummies, or emergency evacuation models that calculate how many people can be safely evacuated from a city during a crisis through specified routes. They provide a “play space” by which city, hospital, factory, and military planners can practice a scenario before introducing the concrete complications of the “real world.” Another helpful analogy for understanding computer simulations is a road map. Just like a computer model, a road map is a “purposeful abstraction”—it shows the line of the road and significant landmarks in order to guide a navigator—but it doesn’t include every blade of grass or tree. Otherwise, the map becomes too complicated, and the user literally cannot see the road for the trees. Likewise, computer simulations don’t replicate every aspect of society or social conflict—rather just the most significant causal mechanisms of collective behaviors and reactions—and how they might be adjusted to affect social stability and levels of mutually escalating xenophobic violence.

In order to study religious violence in this way, the computer scientists will program “parameters” for the models—that is, they will mathematically express relationships between social factors and behaviors that are well-established in social scientific literature—such as the inverse correlation between education level and vulnerability to radicalization. Then, they can run experiments reaching up to 100 years in the future to see how social conditions might be influenced in order to reduce levels of radicalization in our midst. It’s not a Minority Report-type scenario where we can predict that an attack will happen at 2pm on a Saturday in a specific neighborhood. But the scientists can use these tools to sense the increasing likelihood of social instability and reactivity, and signal to policymakers the importance of investing in certain demographics in order to reduce their vulnerability. If a given society invests chiefly in security and homeland defense strategies, the model can show us what our social dynamics might consist of in 50, 80, 100 years—as opposed to what it will look like after comparable investments in language instruction, safe housing, cultural initiatives, or arts programs. The simulation allows for a more precise expression of a future scenario that can accommodate enormous data sets and tremendously complicated, inter-influential causal mechanisms and systems dynamics.

Since computer simulations demand such a precise and data-driven expression of relationships between social factors, the Modeling Religion Project can potentially shed light on the conditions that lead to religious violence and illuminate the path by which massive human displacement is not only caused by religious sectarian violence, but also how some asylum-seekers and second-generation youth become vulnerable to radicalization in their host countries. This story demonstrates how the powerful methodology of computer modeling and simulation can reveal solutions to some of the world’s most pressing global issues. When political rhetoric and reductive media narratives create a simplistic correlation in the collective consciousness between “Muslim refugees and terrorism,” we can become trapped in short term solutions (like “building walls”) that don’t actually make us safer or help us see the problem more clearly. Computer modeling, however, demands that even terms like “religious violence” be broken down into components of identity, tribalism, solidarity, charismatic leadership, diasporic living, levels of income and rates of integration into a host culture, language acquisition, education level, psychological and physical health, access to safe housing and fair labor, et cetera. It can shine a light on the multidimensional complexity of reactive xenophobia and shows how populist ignorance that blocks us from better understanding our collective complexity can actually be lethally dangerous, and trap us in vicious cycles of “immigrant invasion rhetoric,” disenfranchisement of second-generation immigrants, and ineffective public policy that only deepens social divides.

According to So Fare Films team member Melissa Indeglia, Simulating Religious Violence looks into finding the problem and solutions rather than letting the collective discourse be rooted in facile stereotypes. So Fare’s mission is to celebrate and respect diversity by telling the stories of those belonging to minority groups so that others can learn to appreciate them. Melissa hopes that with this documentary, So Fare Films can successfully raise awareness about how stereotypes and hatred are often shaped by the lack of understanding and empathy on behalf of the other. The Simulating Religious Violence documentary project gives insight into this emerging field in the social scientific study of religion and how technological innovation can be used to alleviate humanitarian crises.

A crowdfunding campaign has been launched by the team behind the documentary feature film Simulating Religious Violence in order to finish the film and connect it with audiences.  The crowdfunding campaign takes place from March 8 to April 7, 2022.  Those who desire to support the campaign can do so at: www.SRVfilmsupport.com.

Sofia Parenti is a Communications major at John Cabot University in Rome. Throughout her academic career, she has developed a passion for writing, researching, and learning about people. Aside from her studies, she has dedicated herself to working as a teacher for English beginners and as an intern for a start-up photography agency called Your Hotel Moments. As a Strategic Communications inter for So Fare Films in Rome she is responsible for social media management, newsletter writing, fundraising and marketing strategy planning.

Counterpoint blogs may be reprinted with the following acknowledgement: “This article was published by Counterpoint Navigating Knowledge on 15 March 2022.”