Fire and the Transfiguration of Paradise 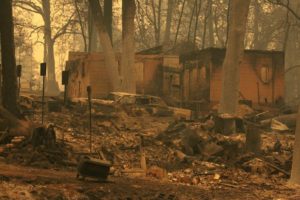 On the morning of November 8, 2018, the world turned silver and a shadow of its normal self. A black cloud of smoke from the Camp Fire in Paradise, California, ten miles from my home, blocked the sun for most of the day. We entered an eerie silver twilight that reminded me of the 2017 solar eclipse. The fire came from nowhere, and its fiery and fast-moving conflagration ruined lives in minutes.

Eighty-six people died, and more than 18,000 homes and other buildings were destroyed before the Camp Fire was extinguished. The homeless population in my town swelled. Our hospital was well over capacity. Fire victims took refuge in churches, the county fairgrounds, and every available hotel room. Many decided never to return, or so they said. The Camp Fire was the most destructive wildfire in the history of California.

We lived in a post-apocalyptic landscape, where ash covered cars and sidewalks like a dusting of snow. We wore masks outside, but thick smoke permeated everything, the cracks in our homes and the pores in our skin. When the rains finally came, I thought about our permeable bodies. We become our surroundings. The microscopic ash lodged in my hair, skin, and lungs. We breathed in the tiny debris from a hundred and fifty thousand acres of burned leaves and woods, from the burned bodies of birds, reptiles, and mammals, including humans, and from the toxic materials used to construct the buildings now reduced to ash. It all washed into our water. The smoke was us, the ash was us.

It was a reminder of our vulnerability, that smoke and ash can remake us. Anthropologists Gisli Palsson and Tim Ingold argue in their book Biosocial Becomings: Integrating Social and Biological Anthropology (2013) that humans can be best understood not as bounded “beings but as becomings.” We develop in relationship to other beings, objects, and landscapes. Palsson and Ingold and others–environmental humanities scholars, new materialists–challenge our assumptions that humans are separate from the rest of existence. I understood this theoretically before the fire. I now know it in a much deeper way.

Weeks after the Camp Fire, graying Ponderosa pines, and gnarled oaks stood like sentinels amidst the ruin, their canopies sometimes intact while adjoining houses were burned to their foundations. A friend circulated a photo of his neighbor’s lemon tree, still green beneath the ash and festooned with bright yellow lemons while the ground beneath was blackened and nearby buildings, reduced to rubble.

These are the strange survivors. What else remains in the wake of such destruction? In my town, months later, over a hundred domesticated animals are still unclaimed by their human companions, who may be dead, moved away, homeless, or incapable of caring for them. Tons of concrete, metal, burned vehicles and other debris have to be moved and processed. Memorials are underway. More medical facilities, housing, and schools are being created.

Waterways were fundamentally altered as heavy rains following the fire washed ash and toxins downhill from Paradise and into Butte Creek, affecting the salmon that spawn there and the downstream Sacramento River. Our water and air have become hazardous from the industrial chemicals, fire retardants, plastics, paint, and other toxic substances. The physical presence of devastation sits in tension with the absence of what existed but is now no more—like the deer and wild turkey which had foraged near a colleague’s home, the sound of crickets through her windows on a summer evening, the perfect tracks of small animals in the snow on a winter morning, all lost to her.

This dynamic of absence and presence is the fire’s aftermath. The absences–lives vanished, even bones unrecognizable–remain in our hearts and memories. But fire can also nurture, and growth comes from devastation, as ecologists and fire scientists try now to tell us. Post-fire forests are likely to see a decrease of non-native plants and an increase of native, fire-dependent plant species like the Ceanothus and Coffeeberry shrubs that need fire to activate their seeds. Plant ash nourishes the soil, and dead trees become habitat to returning wildlife.

For thousands of years before Europeans arrived, Maidu Indians burned the forests where Paradise stood. They timed their burnings to encourage particular plants to grow and to get rid of others. Don Hankins, professor in the Department of Geography and Planning at California State University/Chico, notes that when people stopped controlled burning of undergrowth in California forests, hotter, more intense fires like the Camp Fire increased.

We speak of wildfires as “other,” as natural forces with agency, separate from us, to be fought and conquered. Yet everything that comes from fires gets absorbed by our landscapes and bodies, shaping our health and well-being just as we have shaped the planet’s. The transfiguration of our bodies, tree bodies, other animal bodies, and bodies of water melds our fates together. We are not apart from the forests, the wind, and the drought. We might learn how to live with, not against, fire.

We need to think more about where and how we build and what substances we build with. Some San Francisco Bay Area designers are using natural building materials such as cob in earthquake zones. We might adopt other eco-friendly practices in fire-prone areas and support experts like Hankins who are working with Native communities to apply ancient techniques of living with fire.

Sarah M. Pike, Ph.D., is Professor of Comparative Religion and Chair of the Department of Comparative Religion and Humanities at California State University, Chico. She has written numerous articles and book chapters on contemporary Paganism, ritual, the New Age movement, the primitive skills movement, the Burning Man festival, spiritual dance, environmental activism, and youth culture. Her most recent book is For the Wild: Ritual and Commitment in Radical Eco-Activism (University of California Press, 2017), an ethnographic study of radical environmental and animal rights activism, ritual, and youth culture.

This Counterpoint blog post may be reprinted with the following acknowledgement: “This article was published by Counterpoint: Navigating Knowledge  on 23 Jan 2019.”