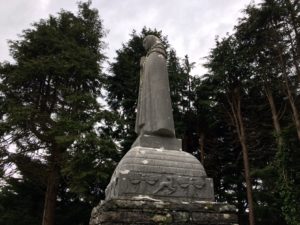 With some of my students, I bent down to fill a cup and drink from Saint Gobnait’s holy well in the woods near Ballyvourney, a small town in southern Ireland. We had approached the site by passing through a metal arch with the inscription, “Holy Well,” nearly hidden on the side of a one-lane road. Our path continued into the woods to a spring encased in rocks, a holy well under a tree festooned with rosaries, ribbons, and pieces of cloth (known as a “rag tree” where offerings and petitions are made). On a field trip exploring religious history in County Cork, Eileen, our local guide, had brought us into the woods to see sites associated with Saint Gobnait, the patron saint of bees and bee-keepers, who is said to have settled in Ballyvourney in the sixth century C.E. and was known for her healing powers and “her” bees.

There are thousands of holy wells in Ireland and they often serve as sites of traditional ecological knowledge where the presence of powerful beings and spiritual experience is deeply felt and where miraculous healings take place. They suggest possible models for how we might engage with the more-than-human world. In an era of mass extinction, bees, frogs, wolves, oak trees, and other threatened species need patron saints, and our devastated landscapes could benefit from holy wells.

“Patron” comes from the Latin patronus, meaning protector, advocate, defender. Some say the earth and its species do not need paternalistic humans to “save nature”—such hubris we humans have. But the literature about patron saints like Gobnait tells of their collaboration with the nonhuman world they have promised to protect. In Irish lore, bees come to Gobnait’s aid and she to theirs. Stories recount how she used honey in her healing practices and rallied bees to chase away cattle thieves and other intruders in her community. In these accounts, Gobnait, her faithful, and the bees enjoy interdependent relationships. As religious studies scholar Robert Orsi argues in Between Heaven and Earth: The Religious Worlds People Make and the Scholars Who Study Them, religion is “a network of relationships between heaven and earth involving humans of all ages and many different sacred figures together.” The reciprocal relationships at Gobnait’s shrine allow for collaboration between humans, the nonhuman natural world, and supernatural figures in and beyond the landscape, constituting a kind of accidental ecological knowledge.

Anthropologist Celeste Ray, who has compiled a database of local stories about wells in Ireland, describes holy wells as sites of traditional ecological knowledge. These wells often have trees associated with them and may be in wooded areas, in which bio-diverse ecosystems thrive because of the relationship between saints, devotees, and wells. Without the protection of wells, these sacred places might have been lost to monoculture tree plantations or herds of sheep. Messing with wells, paving them over, or cutting down surrounding trees are reputed to have catastrophic results for the humans responsible. Such accidental ecological knowledge might be shaped into more intentional efforts to preserve and protect fragile eco-systems around sacred sites.

Holy wells are the object of devotion but they are also subjects and act on the world, just as their patron saints do. In local stories, holy wells have agency and are portrayed in ways that echo contemporary scholarly discussions of what Jane Bennett calls “vibrant matter.” Like the communities they are associated with, wells were “converted” by Christian missionaries, who often established churches near wells where people were already gathering for pre-Christian rites. Holy wells long served as pilgrimage destinations and were included in the pre-Christian harvest festival of Lughnasad, named after the god Lugh.

Although wells were appropriated by Christianity, they also resist human plans. In an account collected by Amanda Clarke on her site “Holy Wells of Cork and Kerry,” a well in County Cork became offended when a woman washed her clothes in it. The well dried up and reappeared at another site. Trees associated with holy wells can also cause trouble if not treated properly. A traditional story tells of a family that went out to cut down a tree growing over a well. They looked up and saw that their house seemed to be on fire but when they got to the house, it was fine. This happened twice more, and the third time they set out to destroy the tree, their house burned to the ground.

Sacred relationships between wells, patron saints, and worshippers have changed over time as religious contexts change. Wells are part of cultural shifts, adapting to different worldviews and holding within them accumulated meanings from pre-Christian paganism, medieval Christianity, and “post-Catholic” Ireland. It is too simple to say Gobnait is a Christian saint. Sites linked to her may also be associated with pre-Christian meanings and practices. Eileen, our field trip guide, explained that many people visit the well whether or not they “believe.” Although she voiced skepticism about how the holy waters “worked,” Eileen told us of miraculous cures and her own encounter with a ghostly presence at the spring. Something was happening there, she suggested, without the need to explain exactly what it was.

Even if we knew nothing about Gobnait and her bees, the material culture of the well demonstrates the power it has had. Devotees who visit the well invest the objects they leave there with thanks and wishes. Figures of the Virgin Mary stand next to crystals and stones, coins are scattered on the rocky bottom of the well, and both Catholic rosaries and colored ribbons are tied on the tree. Things left at the spring negotiate relationships and facilitate healing and luck. They might express Catholic identity, or not.

Beekeepers—Catholic, pagan, and non-religious—have re-discovered Saint Gobnait, whose followers faded in the nineteenth century, when Irish Catholic devotional life was forced indoors by the Vatican, which saw Irish pilgrimages and festivals as irreverent and anarchic. In medieval Ireland, bees, honey, wax, pollen, and beekeepers were important. A set of ancient laws called the Bechbretha (“bee-judgements”) included various terms for bee swarms, guidelines for punishing the theft of hives and honey, and instructions about how to decide ownership of a swarm of bees and how much honey a beekeeper should offer to neighbors.

More than ever, we need a new set of bee-judgments (and wolf-judgments, oak-judgments, etc.). They offer the possibility of connecting with a sacred ecological history and of creating new relationships with saints like Gobnait. One need not believe, as Gobnait likely did, that the soul leaves the body as a bee or butterfly. Bees can be respected and protected for other reasons. The marginalized knowledge associated with holy wells and their patron saints might serve us well today in bringing healing, miraculous or otherwise, to landscapes that have been disenchanted, their riches plundered rather than protected. Perhaps patron saints are one small way to address our local and global ecological problems such as the health of watersheds and bees.

Sarah M. Pike, Ph.D., is Professor of Comparative Religion and Chair of the Department of Comparative Religion and Humanities at California State University, Chico. She has written numerous articles and book chapters on contemporary Paganism, ritual, the New Age movement, the primitive skills movement, the Burning Man festival, spiritual dance, memorializing; environmental activism, and youth culture. Her most recent book is For the Wild: Ritual and Commitment in Radical Eco-Activism (University of California Press, 2017), an ethnographic study of radical environmental and animal rights activism, ritual, and youth culture.

Counterpoint blogs may be reprinted with the following acknowledgement: “This article was published by Counterpoint Navigating Knowledge on 7 August 2019.”