What Can We Do About Extinction? 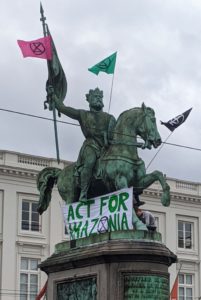 There was a block of ice slowly melting on the ground. Beside it stood a motorboat painted bright pink with ‘Join the Rebellion’ in blocky black letters. Four people were chained to the underside of the boat, two on each side. Their arms inside plastic pipes, chained together inside the pipe, which was bound behind the undercarriage of the boat. They were members of Extinction Rebellion, who were occupying Place des Palais in central Brussels on a cloudy mid-October day. Between 500 and 1000 people attended the protest that day, part of two weeks of actions around the world that the group called an international rebellion. The aim was to force government action on climate change through civil disobedience. The risk from climate change is existential, so they were rebelling against extinction.

When I arrived at the Brussels occupation, the police had already created barricades of barbed wire and interlocking metal fencing across one entrance to the square. Around 5:40pm, the police moved in and arrested hundreds of protestors. They cut the people chained to the boat free with power tools. They used water cannons and pepper spray to disperse the crowd. They beat unarmed people with batons. Arrested protestors were released in the middle of the night in unfamiliar neighborhoods, disoriented and unable to return home on public transport.

While the level of police violence in Brussels was unprecedented compared to other Extinction Rebellion (XR) actions around the world, it is part of the group’s strategy to provoke a reaction from the state. At a talk in Cambridge in the UK held in an Anglican church by the local chapter of XR, three speakers explained their strategy. Using PowerPoint slides, colorful graphics, and alarming statistics, they said there was a 1 in 20 chance of global warming over 5 degrees from pre-industrial levels. This would end all life on Earth. This is “the truth,” according to XR. Governments, NGOs, the IPCC, have failed us. They have breached the social contract by failing to secure the conditions for continuing life on earth. It is therefore moral and necessary to rebel. The talk is the same given at local XR meetings worldwide. It is titled, “Heading to extinction and what to do about it.”

The call to defend life on Earth from extinction is a powerful one. Yet is it too abstract to motivate the sustained civil disobedience that XR calls for? To put it bluntly, will people still care about extinction, someday, if protesting means getting beaten and pepper sprayed, today? According to many scientists, the sixth mass extinction is ongoing, with billions of animal populations already wiped out. These did not prompt mass civil disobedience. Is it only the threat of human extinction that can motivate human action? What if the predicted mass die-off of humans has already begun, only its effects are not spread evenly? Despite its claims to worldwide reach, the largest and most significant XR actions have been in the UK, where it began, and other Western European countries. It has been critiqued as a white, middle class movement, that does not represent those who are already being negatively impacted by climate change and biodiversity loss. With its glamorization of arrest for moral reasons, XR puts off those for whom arrest would not be so inconsequential.

I attended the talk in Cambridge on the hottest day ever recorded in Britain, with the record temperature of 38.7 °C (101.7 F) logged just across the road from the church at the Botanical Gardens. It seems undeniable that this inexorable increase in average temperature is happening. The immediate cause also seems deceptively simple: the burning of fossil fuels. In the XR talk, we were told that it is too late to simply switch to renewables. There is a driving force behind this mass consumption of fossilized carbon: overpopulation. With 7 billion people on one planet, we are overusing resources. And with more people entering the middle class in high population countries such as China and India, the problem will only get worse. They illustrated this with statistics: the Earth by biomass is 60% livestock, 36% humans, and only 4% wild animals. The total quantity of organisms on this planet is made up in the majority by humans and the animals we breed to feed ourselves.

The problem with this view is that humans are not an undifferentiated mass of organisms like microbes. Our cultures and histories are varied. Not all humans consume resources at the same rate or amount because of these contingencies. Consequently, there are vast global inequalities in the production of carbon emissions. Higher and middle income countries emit 86% of global carbon emissions. Even the best conserving American produces double the global per-capita average of carbon emissions. Attacking “overpopulation” as a root cause of climate change ignores these inequalities. The countries with the highest emissions per capita have the lowest fertility rates. Those with the highest fertility rates have the lowest emissions per capita. Calling for fertility control to halt overpopulation is problematic.

The number of people does not cause global warming, the level of carbon in the atmosphere does. Some of the highest emitters in recent years, China and India, are producing emissions primarily from manufacturing not from supporting the lifestyles of their population. The other framing of the cause of the problem is not as overpopulation, but as overproduction. There are not too many people on the planet, there are too many products being produced. The distribution of those products is also inequitable. Too much is being produced for too few.

Reframing the cause of climate change from overpopulation to overproduction shifts the emphasis in solutions as well. There does not need to be a dramatic reduction in the number of humans, but a change in the way humans live. Extinction is avoidable if the material basis of production is changed. New forms of climate activism such as XR incorporate a Neo-Malthusian framework. There are alternative framings that present climate change as a technical problem that can be fixed. However, the political will to fund such changes appears to be lacking, which creates a moral vacuum that Extinction Rebellion aims to fill with civil disobedience. The problem seems to be not so much whether humans can avert their own extinction, but do they want to.

Susannah Crockford is a post-doctoral researcher at Ghent University in Belgium. As part of the European Research Council funded NARMESH project, she is currently working on an ethnography of climate change discourse. She earned her PhD in anthropology in July 2017 from the London School of Economics, and previously completed an MA in religious studies at the University of Amsterdam and an undergraduate degree in anthropology at the University of Cambridge.

Counterpoint blogs may be reprinted with the following acknowledgement: “This article was published by Counterpoint Navigating Knowledge on 17 December 2019.”