The (Really) Originalist Position on Guns—and Your Fife and Drum, Too 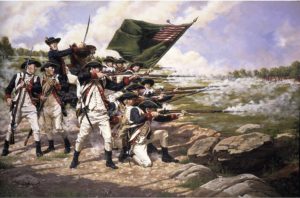 Each time the world hears about another mass shooting in the U.S., it rolls its eyes at the tragic violence and wonders why we people in the country with the biggest guns keep using our biggest guns to kill each other. In the gallows humor department, home of this post, it’s been noted that if Americans want to decimate America, there are some nice people in ISIS and al Qaeda who’d be happy to assist.

But no, we Americans want to shoot each other all by ourselves. Do-it-yourself-ism used to mean raising barns. Now it means shooting other people all by yourself, on the belief that this is what America’s Founding Fathers originally intended in the Second Amendment to the Constitution. It states (in the best eighteenth-century grammar): “A well-regulated Militia, being necessary to the security of a free State, the right of the people to keep and bear Arms, shall not be infringed.”

The idea of sticking to the Constitution’s original intent is called, inventively, original intent or originalism. The eye-rollers around the world just don’t get how brilliant a legal doctrine originalism is. As Counterpoint is a platform for bringing together different disciplines and ways of thinking, I wish only to add a bit of history in support of shoot-’em-up scholarship.

To begin, we must identify the truly original position on guns. In a word, you can buy and own any gun available in 1789, the year the Constitution became my country’s guiding light.

Now, some say they want guns with greater accuracy than those eighteenth-century types, which shot so wildly they were practically useless and known merely as “good handles for bayonets.” But that’s unconscionable, unpatriotic disrespect for the weapons the Founding Fathers knew and therefore intended in the Second Amendment.

Real originalists really follow the Founders’ intent, as did the late Justice Antonin Scalia, who wrote the decision in the 2008 Heller court case, which set out current gun law. He said Americans could own pistols for the purpose of self-protection in their homes. This was not what the Second Amendment said about arming citizens in state militia. But I’m sure Scalia intended that his decision follow the original intent.

Others say they want a rifle that, unlike eighteenth-century weapons, doesn’t have to be re-loaded after each shot by adding gunpowder, ramming the bullet down the shaft to secure it in place, shoving cartridge paper in after the bullet to keep the darn thing from rolling out, and re-attaching the ramrod before shooting a single bullet. But this is just lazy, wishy-washy wishful thinking by those lacking the spine necessary to stick to original intent.

Still others say they’d like a musket with a musket ball which, unlike those of the eighteenth century, isn’t so heavy that gravity pulls it straight down as soon as it’s out of the barrel, so shooters are more likely to hit their feet than their targets. Maybe today’s gun enthusiast wants something with more capacity than the eighteenth century one-round magazine, or prefers a gun that fires more than three rounds per minute—and only if you’re an ace shooter—and has a range of more than 160 feet (48.7 meters). But this is just “interpreting” and “modernizing” the Second Amendment to suit today’s spoiled whiners, thus perverting original intent.

Real originalists love America’s really original guns. My favorite is the “Brown Bess,” along with long rifles and flintlock pistols. I don’t much cotton to the “Charleville” musket because the French made ’em, and the French turned against us in an undeclared war in the 1790s. “Pattern 1776” rifles and “Ferguson” rifles were certainly not what the Constitution intended, cuz them’s what the dastardly Red Coats used. But I believe dueling pistols do fall under “original intent,” because Founding Father Alexander Hamilton used and died by one—see comments on poor accuracy, above.

These are the guns of original intent, whose purpose, some originalists say, was to help citizens protect themselves against an over-reaching, potentially tyrannical federal government. As David French wrote last year in the National Review, an assault-weapons ban “would gut the concept of an armed citizenry as a final, emergency bulwark against tyranny.”

But in fact, what the original intenders intended was to have citizens help the federal government put down rebellions by those who resisted higher taxes.

The first Militia Act in 1792 allowed the president to call out state militias “whenever the laws of the United States shall be opposed or the execution thereof obstructed, in any state.” As a response to Shay’s Rebellion against rising taxes (1786–1787), it intended to suppress any similar future opposition.

The second 1792 Militia Act dragooned every “free able-bodied white male citizen” between the ages of eighteen and forty-five into a local militia and required that he outfit himself “with a musket, bayonet, and belt, two spare flints, a box able to contain not less than twenty-four suitable cartridges, and a knapsack.” You could get out of your obligation to serve in militia if you worked in a critical job, such as stagecoach driver, ferryboatman, or (revealing Congress’s self-estimation) Congressional representative. The intention of this second act was to suppress the Whiskey Rebellion (1791–1794) against higher taxes.

So let us Americans abide by original intent and shoot anyone who has a problem with paying taxes, like the top income quintile who wanted—and got—a whopper of a tax cut from Trump. They enjoyed a 3% rise in income as a result—compared to a 0.4% rise for the lowest income quintile—plus massive cuts in estate tax and corporate tax rates (from 35 to 21%). “The Joint Committee on Taxation estimates the law delivers [to the group of] taxpayers who earn $1 million or more a tax cut of $37 billion in the next year alone.”

America will hunt down these nefarious tax evaders by arming every “free able-bodied white male citizen” with the guns intended in 1789. You can have a fife and drum, too.

Professor Marcia Pally teaches at New York University and is a regular guest professor at the Theology Faculty of Humboldt University-Berlin. Her most recent book is Commonwealth and Covenant: Economics, Politics, and Theologies of Relationality, which was nominated for a Grawemeyer Award in Religion and selected by the United Nations Committee on Education for Justice for distribution worldwide. Mimesis and Sacrifice will be published in Oct. 2019 (Bloomsbury Academic) and The New Evangelicals was published in 2011. In addition, Prof. Pally has been a columnist and contributor to U.S. and European periodicals, including Religion and Ethics, Commonweal, The New York Times, The Guardian, Religion News Service, die Zeit, Süddeutsche Zeitung, and Tageszeitung, among other periodicals.

Counterpoint blogs may be reprinted with the following acknowledgement: “This article was published by Counterpoint Navigating Knowledge on 18 September 2019.”The views and opinions expressed on this website, in its publications, and in comments made in response to the site and publications are those of the author(s) and do not necessarily reflect the views and opinions of Counterpoint: Navigating Knowledge, its founders, its staff, or any agent or institution affiliated with it, nor those of the institution(s) with which the author is affiliated. Counterpoint exists to promote vigorous debate within and across knowledge systems and therefore publishes a wide variety of views and opinions in the interests of open conversation and dialogue.