The Flint Knapper Who Cried “Snake” 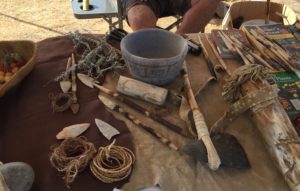 During the Closing Circle of Rabbitstick Primitive Skills Gathering, a flint knapper (who shapes rocks by hand to make stone tools) asked the participants, “How do you react if someone in a crowd yells snake?” “Food!” said one. “Hide!” answered another, meaning the snake’s skin. “And what happens when you yell ‘snake’ in a normal crowd?”  he asked. “Everyone screams and runs away.” And then people told their stories about the difference between Rabbitstick and the “normal” world, where most people do not consider snakes food.

Marginalized knowledge, such as how to use “Stone Age” methods to cook nonhuman animals or preserve their skins for various uses, is at the center of the “primitive” or “ancestral” skills movement in the U. S. This movement is primarily made up of middle-class white Americans though people of other backgrounds were present at the Rabbitstick campsite, including an Inuit truck driver from Alaska. At Rabbitstick gatherings I’ve met retired engineers living in cities and teaching ancestral skills classes as well as hermits living off the land and off the grid in remote woods and deserts. All were there out of some dissatisfaction with contemporary consumer-driven life and a kind of paleonostalgia for more direct ways of interacting with other species.

As Rabbitstick organizer Dave Wescott put it, “A dumpster diver and retired dentist are learning from each other.” It’s “the skills and respect for the natural world” David Holladay, a long-time ancestral skills teacher, said in the same interview, that “are the common denominators” of this movement.

These skills and respect mean living more intimately with the nonhuman world—allowing ourselves to be enmeshed in the complex relationships that are otherwise hidden from us, such as where our food comes from. Classes on how to hunt and prepare wild animals to eat as well as how to tan their hides for clothing were offered at Rabbitstick, as were classes on making baskets from willow, foraging for edible and medicinal plants and fungi, flint knapping, cordage (twisting plant fibers into a rope or cord) and making fire with two pieces of wood. A leather worker said classes on “wet brain” tanning (using the animal’s brains to process a skin) helped her “honor the animal.” In the ancestral skills world, honoring means being aware of the ecosystems where you find your food, taking only what you need, using the whole animal in such a way as to minimize waste, and taking care to ensure the health of other species.

Eating and being eaten are central motifs of the ancestral skills movement. Participants take no food with them on week-long wilderness trips and rely on their skills to eat—and to be sure they are not eaten by cleverer animals. A workshop on “Thinking like a Predator” covered self-protection in grizzly bear country while two girls from the four to nine-year-old “Sprouts” class explained that they had been gathering and tasting grasshoppers and red ants.

As a vegetarian, I struggled with the movement’s matter-of-fact-ness about hunting other animals. But when I heard people at Rabbitstick decry CAFOs (Concentrated Animal Feeding Operations) and insist on eating only wild meat, I realized our views about the horrors of modern agribusiness were remarkably similar. And many animals suffer and die for my vegetarian diet, as Lori Gruen and Robert Jones point out in “Veganism as an Aspiration.”

Others at Rabbitstick eat roadkill, putting dead animal bodies to good use, given the countless nonhuman animals that die along our highways. I was shown roadkill pelts and skins used as decoration or sewn into a buckskin skirt. Many gathering participants described themselves as “opportunistic” eaters who can tell if a dead animal is safe to eat and know how to process many parts of its body.

The treatment of our own dead bodies was also discussed at Rabbitstick. Ancestral skills teacher Peter Bauer consumes roadkill and, in turn, wants his body to be eaten by other animals. He hopes his body will be buried in the ground, without a coffin or embalming, a tree planted to mark its resting place, but no headstone. If that is not possible, he wants a “sky burial” in which his body is “placed high atop a mountain and eaten by vultures.”

More ancestral skills gatherings and schools are announced each year to help people with what philosopher Albert Borgmann called “focal things.” In his classic study, Technology and the Character of Contemporary Life (1984), Borgmann warned against our increasing focus on  “devices” that disengage us from the world. We have no relation to the materials that go into these devices or the places their elements come from. Focal things like tanning and fire-making, on the other hand, connect us to materials and landscapes. On the Rabbitstick site in eastern Idaho, a pair of sandhill cranes flew over my head and a flicker took off from one of the aspens while I foraged for fungi to use for making paper and watched others gather willow branches for their baskets.

I still might not think “food” if someone nearby yells “snake,” but my experience with ancestral skills practitioners makes me ask Thoreau’s perennial question from Walden; or Life in the Woods (1854): how much do we really need to live (and die) “well”? What does living well with other species mean?

Sarah M. Pike, Ph.D., is Professor of Comparative Religion and Chair of the Department of Comparative Religion and Humanities at California State University, Chico. She has written numerous articles and book chapters on contemporary Paganism, ritual, the New Age movement, the primitive skills movement, the Burning Man festival, spiritual dance, environmental activism, and youth culture. Her most recent book is For the Wild: Ritual and Commitment in Radical Eco-Activism (University of California Press, 2017), an ethnographic study of radical environmental and animal rights activism, ritual, and youth culture.

This Counterpoint blog may be reprinted with the following acknowledgement: “This article was published by Counterpoint Navigating Knowledge on 3 October 2018.”