Seeds of Connection, Seeds of Change: Botanical Folktales for Ecological and Relational Storytelling 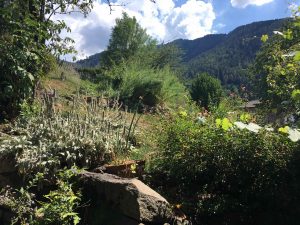 “Plants prepare for the winter through fruits and seeds, and through discarding what they don’t need. The clearing-out begins,” writes Lisa Schneidau in her collection of botanical folktales. Every year autumn for me is the season of harvesting experiences and memories, a precious time for cleansing and conveying energy upon roots in order to keep growing in life. This winter, a particularly complex and chaotic one, we should make it a special point to learn from plants and trees, and listen to their stories of connectedness, reciprocity, respect, care, and healing. As ‘good to think with,’ and not just think ‘about,’ botanical beings should be understood as sentient fellows and eloquent story-tellers from whom we can learn many lessons in terms of traditional ecological knowledge, religion, and spirituality—knowledge that, along with modern science, can mitigate and even reverse the contemporary biodiversity loss, challenge cultural/ecological monocultures, and help us to reground ourselves as nature-kind.

During my eclectic exploration of tales and myths over the last couple of months, I came across an old legend from a village in the Italian Alps that tells us of an encounter between a woodcutter and a tree in the forest. While its opening tells us that many years ago all creatures still spoke, the end of the story reports that when the Council of Trent took place, plants, stones, and animals were blessed; and since then, they stopped speaking. Thus, in an interesting way the story links the end of inter-species communication with the culmination of the Christianization process in the Alps. This Alpine folktale closely resembles the narrative found in several Indigenous American myths that tell of a primeval communication between humans, animals, plants, trees, and stones. At least for the European Alpine context, this story provides us another intriguing detail about the origin of detachment of humans from the natural world we belong to. The Council of Trent (1545–1563) was a reaction to the Protestant Reformation, a pivotal period that marked the end of the ‘Middle Ages’ and the start of the ‘Modern’ era. This date is considered one possible starting point of the so-called Anthropocene. In accordance with the folktale, it can be assumed that beforehand the idea of an animate nature densely inhabited by visible and invisible other-than-human persons existed from Antiquity until the Middle Ages. This type of relational cosmos, intimate communication, and kinship have progressively faded away since then, obscured by the myths of Modernity. However, can we be sure that plants, trees, stones, and animals have stopped speaking, or is it more that we have we forgotten how to listen?

The much debated term “Anthropocene” also leads to another question: which ‘human’ are we talking about? Indigenous voices, local communities, and alternative worldviews, philosophies, and spiritualities tell us of radically different stories about how to be human and to relate to nature. Narratives of embodied, relational, non-hierarchical, and non-anthropocentric practices, ideas, and representations are not only to be found in many Indigenous and marginalized communities worldwide, and in several ancient mythologies, but also within some of the less dominant European histories and cultures. What is generally referred to as European folklore comprises a rich constellation of collective narratives that transmit stories of traditional ecological knowledge, of embodied religious expressions and eco-spiritualities, of animistic engagements, and of diverse human-environmental relations throughout history. Thus, folktales that tell of dancing and travelling trees, of sacred and healing plants, of fairies living in the forests, pastures, and orchards, of maidens who prevent destruction of native forests and their wildlife or who restore endangered ecosystems by scattering seeds through the valleys, all sew connections and can mend the bond between us and the other-than-human communities. As affirmed by the two Scottish story-tellers Allison Galbraith and Alette Willis in their book Dancing With Trees, “what the world needs – what we need – is an infusion of storied magic to bring us back into life and back into the ecological community to which we belong.”

If it is true that “plants tell their stories not by what they say, but by what they do,” it is through stories that non-humans can speak ‘in their active voice.’ The role of collective narratives and storytelling is crucial not only for reconsidering botanical and arboreal personhood, but also for advancing multispecies storytelling, ecological education, and a post-human anthropology. Stories, including songs and poems, are sources of ecological knowledge and sustainability that, along with rituals and ceremonies, bring us back into the relationship with the web of life, and celebrate different ways to be human. David Abram underlines the importance of stories in his The Spell of the Sensuous, by writing that “the telling of stories, like singing and praying, would seem to be an almost ceremonial act, an ancient and necessary mode of speech that tends the earthly rootedness of human language”. Indeed, “a story envelops its protagonists much as we ourselves are enveloped by the terrain. In other words, we are situated in the land in much the same way that characters are situated in a story,” where “along with other animals, the stones, the trees, and the clouds, we ourselves are characters within a huge story that is visibly unfolding all around us, participants within the vast imagination of the world.”

In this line of thought, the contributors to the Manifesto for Living in the Anthropocene claim the need of “situated stories” that connect us “with those who are creating new ways of living in the Anthropocene”, and at the same time “ask their audiences to be curious and to care about the many relationships, the many ways of being, the many worlds that are disappearing in bright bursts of pain in this time of escalating extinctions,” together with those that have already disappeared, leaving us with their precious teachings. In order to change the path that is bringing us to the brink of social and ecological collapse, we should navigate alternative waters, waters of reconnection, respect, reciprocity, and sustainability. As part of this journey, collective narratives of mutually beneficial botanical-human relations can show us new ways to think and act ecologically.

Anna Perdibon is a scholar in the fields of religion and anthropology. She obtained her PhD in ancient Near Eastern religions and mythology at the Hebrew University of Jerusalem (2019), and is the author of Mountains and Trees, Rivers and Springs: Animistic Beliefs and Practices in Ancient Mesopotamian Religion (Harrassowitz Verlag, Wiesbaden, 2019). Currently an independent writer and researcher, she engages with new animisms, religion and nature, and botanical personhood in ancient and contemporary cultures, with a particular interest in marginalized worldviews and relational narratives.

Counterpoint blogs may be reprinted with the following acknowledgement: “This article was published by Counterpoint Navigating Knowledge on 24 November 2020.”